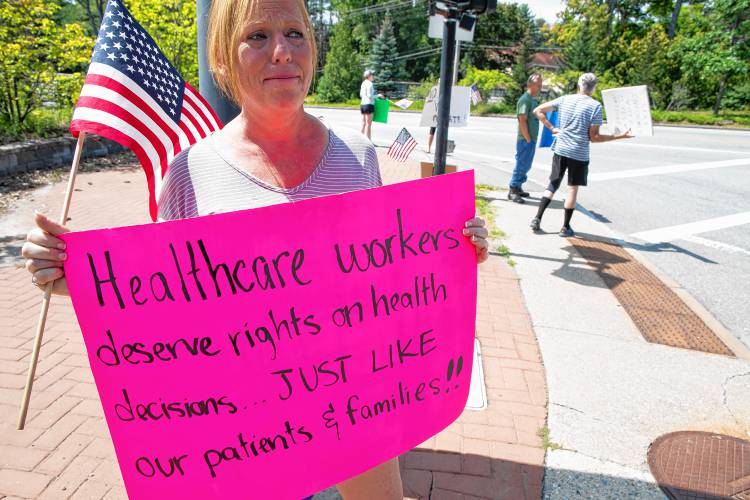 Terese Grinnell, standing in front of Concord Hospital with fellow healthcare workers on Monday, is a registered nurse and says she is not going to get vaccinated and does not like the mandates that are coming about. (Geoff Forester/Concord Monitor)

With an American flag in one hand and a fuchsia sign in the other, Terese Grinnell stood in front of Concord Hospital for hours to protest impending Covid-19 vaccine mandates for healthcare workers.

After Dartmouth-Hitchcock announced they would require the vaccine for staff in early August, it seemed inevitable that smaller healthcare employers would soon follow suit. For Grinnell, a nurse in the Concord area who declined to say where she was employed, that requirement would be a deal-breaker.

As a single mom to three, one of whom she began fostering two weeks ago, leaving her job would be challenging. Still, if her employer decided to impose a mandate, she said she would have no choice.

“I can’t be part of the system I feel is coercing and forcing things on individuals,” she said.

As the Delta variant spreads through New Hampshire, spiking daily infections and filling hospitals in its wake, healthcare providers have looked to vaccine mandates as a way to protect their vulnerable patients and residents.

However, employees like Grinnell have planted hesitation in the minds of administrators. In an industry that is facing a severe shortage of workers, losing employees over a vaccine mandate could throw the provider into a state of crisis.

On Wednesday evening, the Biden administration put even more pressure on nursing homes by announcing that the facilities must require their staff to be vaccinated in order to participate in Medicare and Medicaid. Brendan Williams, president of the New Hampshire Health Care Association, said nearly all nursing homes in New Hampshire rely on these federal healthcare programs to keep their doors open.

“Medicare is a lifeline for nursing homes,” he said. “There is no way anyone is going to opt out. It’s just the nature of how we fund long-term care in our country.”

David Ross, administrator at Hillsborough County Nursing Home, said prior to the White House announcement, the home opted to keep chipping away at the remaining unvaccinated with incessant education and encouragement rather than imposing a requirement. The home made slow but steady progress: At Tuesday’s vaccine clinic, four new employees signed up to get vaccinated.

He said he fears the vaccine requirements could cause about 20% of his staff to quit. On Thursday morning, mere hours after Biden announced the mandate, one of his staff members told him she already lined up an interview for another job. He said several more staff were distressed about the announcement as well.

Ross said he is a strong proponent of vaccinations for healthcare workers, but the announcement puts his facility in a precarious staffing position.

“We know what the employment market is like,” he said. “We just can’t compete with that at all.”

Williams said NHHCA has encouraged its members to mandate the vaccine — but clarified that homes should only do this if they could afford to lose some staff.

“We are so strapped right now for staff that you know to lose even a few vaccine-hesitant employees could be an existential crisis,” he said. “If it were a level playing field, I wouldn’t be so concerned.”

He takes issue with the fact that the Biden administration hasn’t extended the mandate to hospitals, home health care agencies or community health clinics, which also participate in Medicare and Medicaid. He said he is worried unvaccinated licensed staff will flock to those facilities instead of getting the shot.

“By playing favorites, the administration allows other care settings to serve as refuges for vaccine-hesitant nursing home staff,” he said in a press release.

Some nursing homes have already seen a backlash to their mandates from unvaccinated employees.

Last week, Merrimack County Nursing home announced they would require all employees at the home — including volunteers and vendors — to receive at least their first Covid-19 shot by Sept. 1.

The decision came after a handful of unvaccinated staff members tested positive for Covid-19, pausing family visitations and setting off hundreds of Covid-19 tests. While about 99% of the residents had chosen to get vaccinated, only 63% of the nursing home staff made the same choice, said Matt Lagos, the home’s administrator.

“We continue to see cases rise and the threat is once again outside our doors,” he wrote on the nursing home’s Facebook page.

He said some former employees and existing employees under pseudonyms began arguing with residents and families in the comments section of the post. Several people also shared Lagos’ post announcing the mandate, including several who identified themselves as employees.

“Looks like they’ll be losing workers,” one poster wrote.

“Let them fire you,” another said.

However, as of Tuesday morning, only four employees — two of whom were not nurses — had resigned in response to the mandate while 20 employees signed up for the next vaccine clinic.

“Every employee matters — obviously we don’t want to lose anybody,” Lagos said. “But this is not anything we can’t recover from.”

Other nursing homes across the state have had similar success. In early August, Genesis Healthcare, which owns about 30 facilities in New Hampshire, announced it would require the Covid-19 vaccine for staff starting Aug. 23.

“While we would have greatly preferred a strictly voluntary process, our commitment to health and safety outweighs concerns about imposing a requirement,” the company said in a press release about the decision.

Lori Mayer, a Genesis spokesperson, said in the four nursing homes where they piloted the mandate, thoughtful discussions with staff led many to get vaccinated instead of leaving their position.

“However,” Mayer said. “We have made extensive contingency plans to ensure the adequate staffing of our facilities.”