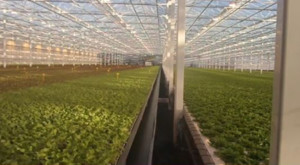 The greenhouses being built in Berlin are modeled after ths one, which grows lettuce in Belgium.

Construction is expected to begin in July on the long-planned North Country Growers greenhouse project in Berlin, which when fully operational is expected to produce 15 million heads of lettuce and 8 million pounds of tomatoes annually.

The company, a subsidiary of American Ag Energy, is planning to build and operate two 10-acre high-tech greenhouses that will employ about 80 people.

According to the Berlin Sun, American Ag Energy CEO Richard Rosen said he expects site work – begun last summer – to be completed within the next month.

He said he anticipates holding a ribbon-cutting in July when they start constructing the first greenhouse. He explained that the lettuce greenhouse will go up first. He expects it to be finished by November and will do some test runs before moving into commercial operation next spring.

Once the first greenhouse is completed, Rosen said, work will immediately begin on the second.

The newspaper reported Rosen’s ultimate goal is to have a total of 50 acres of greenhouses in the area, and has already identified other sites in Berlin and nearby Milan.

According to Rosen, 95 percent of the tomatoes and lettuce sold at supermarkets in the region come from California, Mexico, Arizona and Florida.