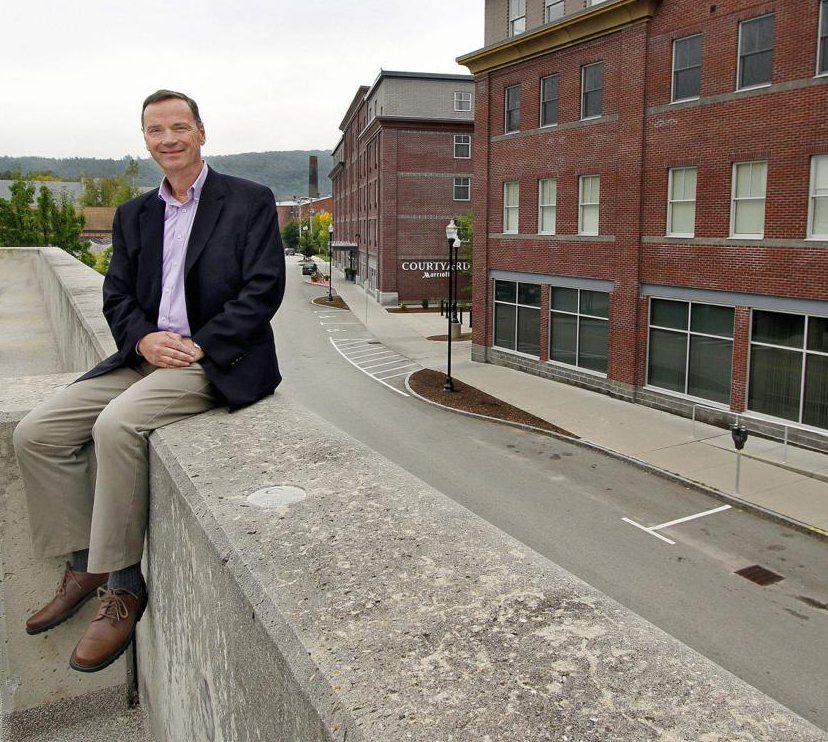 “What always comes to the forefront is promoting arts and culture as a new anchor for downtown,” says Jack Dugan, president of Monadnock Economic Development Corp. (Photo courtesy of Keene Sentinel)

In an age when anything — goods and services, entertainment, meals — can be ordered from anywhere with the click of a button, how does a town remain economically sustainable? The hope is that a new initiative for downtown Keene will be a model answer to the question.

The concept involves creation of an arts corridor in downtown Keene — an idea that was presented this spring and is on its way to becoming reality.

Among the ideas proponents hope will come to fruition are an outdoor performance venue located along a pedestrian mall, a welcome center and live/work space for up to 25 artists. They are just a few of the ideas for the corridor, an area centered on Gilbo Avenue between Main Street and School Street (an area bordered mostly by parking lots) and extending to the Railroad Square area on the other side of Main.

John G. “Jack” Dugan, president of Monadnock Economic Development Corp., said the project’s goal is to bolster efforts to revitalize Keene’s downtown while supporting the area’s already vibrant arts community. In the past year alone, a new crafts gallery opened on Central Square as well as an artists’ cooperative on Roxbury Street. And in the spring, an international group of artists painted 16 murals honoring the city’s history on the exterior walls of downtown buildings. Several annual arts events, including the Keene Music Festival and Art Walk, also take place downtown.

“The city has hired consultants who have hosted forums on how to stay ahead of the curve and keep (downtown) vital in the age of Amazon while considering what’s going on in the community and the city’s master plan,” Dugan said. “What always comes to the forefront is promoting arts and culture as a new anchor for downtown.”

It’s no secret the arts boost local economies. A nationwide federal study on arts and economic prosperity — the most recent was in 2017 — found the nonprofit arts and culture organizations surveyed generate $18.5 million in economic activity each year in the Monadnock Region.

The arts corridor’s performance venue, slated for a vacant dirt lot owned by Keene State College on the southeastern corner of School Street and Gilbo Avenue, will be a pavilion that can fit 1,500 under its 15,000-square-foot roof and accommodate such events as concerts, meetings and farmers markets. And it can be flooded in winter to use as an ice rink.

The older skate park on Gilbo Avenue would be replaced with a new state-of-the-art skate park, in coordination with a volunteer group that has been raising money for that purpose.

Closer to Main Street, MEDC would buy the transportation center from the city and add commercial space and a downtown visitors’ center. The combined live and work space for artists would go into the space that houses the St. James Thrift Shop at the rear of St. James Church, with which MEDC is negotiating the purchase of the building.

Across Main Street, MEDC has already extensively redeveloped the area around Railroad Square, where the Courtyard by Marriott Hotel and Monadnock Food Co-op are located. Dugan envisions buying the square from the city, and building additional live/work spaces for artists.

Those efforts would dovetail with the co-op’s planned expansion, which, Dugan said, includes the creation of an outdoor stage space with sound and light capabilities in the amphitheater behind the store.

Tying it all together would be a pedestrian-only area along the block of Gilbo Avenue between Main and St. James streets, which would be permanently closed to traffic. Dugan met with a team of consultants who specialize in “creative placemaking” to discuss design possibilities for the area.

MEDC is also planning to hire consultants to study the demand for live/work spaces for artists and to develop a plan for the operating entity that would oversee the corridor on an ongoing basis.

Dugan said one reason the idea can work is that just a few entities — MEDC, the city and Keene State — already own most of the property in consideration for the arts corridor.

While planning is still in early stages, Dugan said he has heard a number of suggestions for the pedestrian space from members of the public, from dancing fountains to a playground to fire pits that could remain a draw during the winter.

Organizers also hope to purchase a train for the area that would function as retail and dining space while paying tribute to Keene’s railroad history. An old dining car could be repurposed to house a restaurant, Dugan said, while a former sleeper car could be rented out as an Airbnb. Additional freight cars could be used for retail stores, pop-up galleries or as rehearsal space for musicians.

MEDC plans to use a combination of revenue sources aimed at community development to fund the $30 million project, Dugan said.

“There’s a perfect storm of funding sources available all along the corridor,” said Dugan. Projects that improve the community are eligible for the federal New Markets Tax Credits.

“They provide another source of funding for investors and a significant tax break for projects in the zone,” said Dugan.

And because the arts corridor project will create jobs, it is eligible for a Community Development Block Grant.

He pointed out the grant would be used to help renovate a portion of the city’s public library and the historic county courthouse recently, projects that carried similar price tags.

“This is within the realm of what we’ve done,” he said.

To capitalize on the New Markets Tax Credits, MEDC must submit the project to community development entities this fall, with awards typically announced in the spring. After the project gets necessary approvals from the city, construction would likely begin in 2021 and take about two years.

Over the next few months, consultants hired by MEDC will hold meetings with small groups of community stakeholders, such as abutting property owners, local arts groups and economic development organizations, to get feedback on the project, Dugan said. Then, in the fall, they’ll hold a charrette for the larger community to gather more public input.

“We’ll come up with three different renderings and a proposed final plan for the public space,” said Dugan, “and at the same time we’ll be negotiating purchase agreements for land and buildings.”

Dugan stressed the proposal is preliminary and could change significantly before becoming reality.

Though many other communities have designated arts districts, Dugan said that so far, this proposal seems to be unique in its focus on downtown.

“We don’t want it to be just green space or bricks,” he said. “We want it to be an active pedestrian area for people to interact and experience downtown Keene.”