Are seasonal visitors welcome guests or do they pose a potential threat? 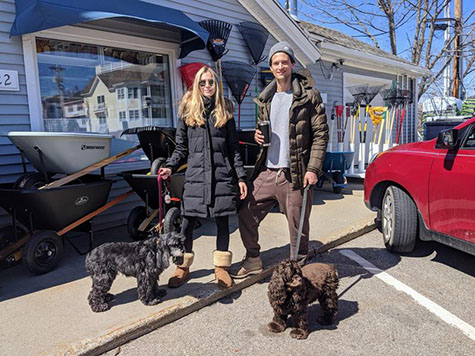 Coming in just behind Maine and Vermont, New Hampshire has the third highest percentage of seasonal homes in the U.S., at about 10%, or roughly 56,000, according to the U.S. Census Bureau.

A recent study shows these areas may be at greater risk from Covid-19.

According the Carsey School of Public Policy at the University of New Hampshire, in the nation’s 199 rural counties – where seasonal housing accounts for 25% or more of all housing units – the average number of Covid-19 cases per 100,000 people was more than twice as high as in other rural counties and 15 percent higher than in urban areas.

As snowbirds return, and out-of-staters flock to their second homes for a more comfortable place to wait out the pandemic, tourist communities are urging safety first, and closing some public facilities, recreation areas and parking lots.

The rural counties with high shares of seasonal housing in New Hampshire include Grafton, Coos, Carroll and Belknap counties.

Andrew Dorsett, town manager of Littleton, in Grafton County, says he has heard from property managers who tell him that their clients who own second homes in the area are requesting their properties be made ready for an earlier-than-usual return.

Dorsett says Littleton has become a gathering place for adventure and boutique tourists from every corner of the world, and with four exits off Interstate 93, travelers heading to points beyond find it convenient to grab a bite and restock.

“A drive through the grocery store parking lot would show the mix of license plates – Quebec, New York, Michigan, California, Pennsylvania, Tennessee and Florida,” Dorsett said. “Some residents at first complained that people were traveling from cities to buy our community’s supplies. At this point, it seems more likely the second-home owners have returned to the tranquility, nature and convenience of a northern New England quarantine.”

Dorsett said the town has closed playgrounds and basketball courts but made a point to keep the trails, fields, greenspaces, and parks open.

“We think it’s important for people to get outside and stay active, while adhering to good hygiene.”

Pamela Laflamme, community development director for Berlin, in Coos County, says the city has asked residents who have returned early from wintering in warmer states to self-quarantine for 14 days, as advised by the CDC, and follow best practices. She says this time of year is a shoulder season between the end of the winter and the start of ATV season in late May.

“While we do have some homeowners who in the past few years purchased second homes in Berlin largely for ATVing, we really haven’t seen or felt a strain if they have come here to hunker down,” Laflamme said. “Given how close we are to both the Maine and Vermont borders and the fact that we are the large population center for the region, we are used to people coming to the area for supplies and services, so that is definitely continuing to happen during this time period.”

“People were concerned local food supplies were being taken,” she said. “We saw a spike in purchasing food, but that was everybody … and people who own a second home here are taxpayers too, and support the local economy, especially it they are ordering delivery and takeout.”

It’s a diplomatic dance these tourist communities are doing as they decide what to close and what to keep open. Followed closely by uncertainty about what — if any kind of summer season they will have.

Laflamme said Coos County relies heavily on the ATV season. “There is definitely a lot of concern about how this will impact our region, which was really doing well with outdoor summer recreation both motorized and non-motorized.”

Dorsett says unless things are reopened in the next month or so, local, state and national tourism will be tremendously impacted.

“If the stimulus packages provide a cushion to enable small businesses to weather the impact, I can imagine enough pent-up cabin fever to boost a boon in tourism,” he said. “Right now, however, we are in the midst of this with an unclear view of the scope or timing for the reopening of our economy.”

Jac Cuddy, executive director of the Mount Washington Valley Economic Council, one of the state’s 10 regional development corporations, is based in Conway, in Carroll County. It’s a region that depends on tourism and retail where shoppers don’t need snow or foliage to draw them to the outlets.

“Mid-March, it seemed there were a lot of out-of-staters coming up, but since the governor put the 14-day rule in place it is rare to see out-of-state plates. Second-homeowners are coming up but they are self-quarantining.”

Cuddy says the council, meanwhile, is trying to help businesses make it through the crisis, providing loans and answering questions about federal programs that he says seem to change every day.

“We closed more than $580,000 in loans. I asked the board to put a program together to get money out there. We were able to provide some express loans of $25,000 or less to area restaurants, lodging, and retail,” said Cuddy.

In the Lakes Region, Motorcycle Week — one of the state’s largest tourism events — jump-starts the entire summer season and represents as much as 15% of annual revenue for some businesses, says Gifford.

“We are starting to have the conversation about what is on the other side. Talking with state officials and other chambers,” she says. “We have a lot of outdoor seating. I would love to see our restaurants open with social distancing measures for outside areas.”

She adds that if hospitality doesn’t come back to prior levels, communities can help transition workers to other areas that are hiring, for example, from a hotel housekeeper to nursing home attendant, where they would be full time and have benefits.

Gifford is also hopeful for outdoor events including, a food truck festival in August and pumpkin festival in October. “Social distancing and human behavior will likely determine how we move forward,” she says.