Applying ‘conscious capitalism’ to your mission

To Ryan Barton, the rocking-chair test is way more important than the most-toys test. 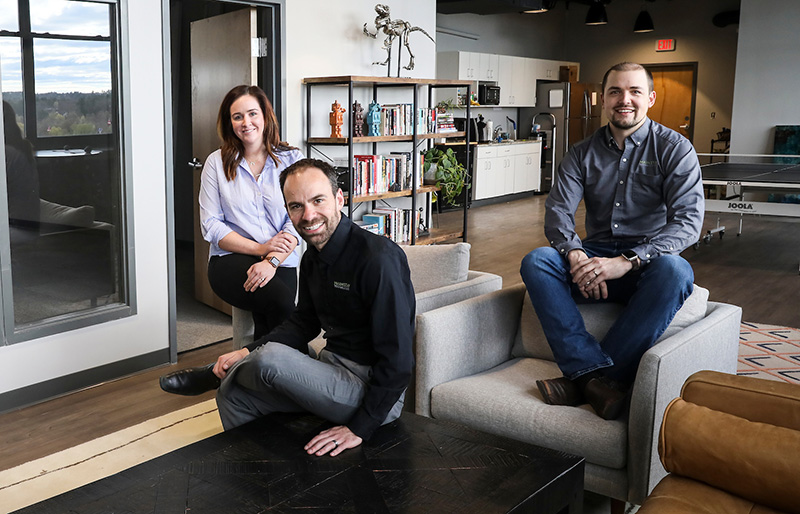 Some of the members of Mainstay Technologies’ ‘charity team,’ who decide what kind of work to support through the company’s donor-advised fund at the New Hampshire Charitable Foundation. From left, they are: Erin Mealey, Ryan Barton and Eric Shanley. (Photo by Cheryl Senter)

The CEO of Mainstay Technologies, who oversees a growing IT and cybersecurity company with offices in Manchester and Belmont and clients statewide and in Massachusetts, wants to pass the test he knows he will give himself someday, from his porch rocker: Did he genuinely strengthen community and have a positive impact on the lives of the people around him?

The other test, about collecting the most toys? That one doesn’t really matter to him.

Don’t get him wrong: Barton is in business to do well. But he defines doing well pretty holistically.

“I am very proud of Mainstay’s profit margins,” he says, “but ultimately, that is not the only score that is to be kept.”

Barton got into business young. As a tech-savvy 20-something, he discovered a talent and a passion for making companies’ tech run smoothly — a talent and passion that he would build into Mainstay.

He had no interest in locating the business in a sprawling center of commerce — he wanted to stick around in a place with no traffic and great natural beauty where he could build a balanced life with his family. And he wanted to draw people to his business who wanted the same things.

Along the way, he discovered the philosophy of “conscious capitalism” — and the book by the same name. The idea that business can and should be marshalled to do good, not just for shareholders but also for people and the planet, dovetailed with his values as a Christian, and with the stewardship obligation he feels to people and community and the environment, he said.

He has applied the “conscious capitalist” philosophy to every aspect of building his business (Mainstay’s mission statement is, “We give more than we get.”) from generous benefits packages and paid volunteer time off to corporate philanthropy and energy-efficient lighting and solar arrays.

A “charity team” made up of Barton and four other team members from all aspects of Mainstay’s operation decide what kind of work to support, and Charitable Foundation staff offer suggestions of organizations working in New Hampshire that align with those priorities. The Mainstay team recommends the grants, which are then made from the fund at the Foundation.

Erin Mealey is an information security program specialist at Mainstay. She said Mainstay’s charity program is part of what people value about working for the company.

“To be able to be part of an organization that pays that forward in such a significant way, that sends this message of continuous giving and continually trying to improve our community is really important to me,” she said.

And being on the charity team has brought members outside their usual white-collar bubbles.

They are learning about the visceral, sometimes heartbreaking, needs in the community around them — and how to help. They learned that lack of available cash to pay for a required “home study” is sometimes the obstacle that blocks foster parents from being able to adopt children in need — and that often those children are their own grandchildren, who have suffered the trauma of losing a parent to the opioid crisis. The team recommended a grant to help pay for home studies, and help give those children the security of forever homes.

They have made annual grants to help refugee children be able to attend summer camp at Camp Spaulding.

And because many people at Mainstay understand, from lived experience, how valuable a degree from a New Hampshire community college is, they recommended a grant into a Charitable Foundation scholarship fund that helped a first-generation college student afford his associate degree in computer technology from NHTI.

Mainstay’s giving is not just in the form of dollars — the company also organizes staff volunteer days (they built a human-sized foosball array for the kids at Camp Spaulding during a recent outing) in addition to paid volunteer time off for staff.

The financial bottom line matters. But so do other things, said Barton.

“We want to see our community strengthened,” he said. “We want to see that in the environment and in our charities, we want to give more and give better and inspire more action within the team and encourage more volunteerism.

At a foundational level, Barton added, “I think business success needs to be measured by its impact on others, and the good it does in the world.”