Ex-employee charges company retaliated against her after turning to Human Rights Commission, EEOC 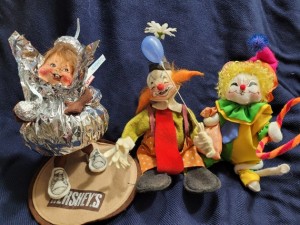 At its height, Annalee Dolls had 300 employees working in seven buildings in Meredith and some of its dolls fetched up to $6,000 at auction.

Rose Homer, the bookkeeper from Alexandria, filed her suit against Meredith-based Annalee Dolls and its CEO, Andrew Button on Aug. 1.

The suit followed the Human Rights Commission’s finding of probable cause against Button, and Annalee retaliated, according to the complaint filed in U.S. District Court in Concord by Jon Meyers, an attorney with Backus Meyer & Branch in Manchester. Annalee’s Concord attorney, Friedrich Kreutzer Moeckel, declined to comment on pending litigation.

At its height, Annalee Dolls had 300 employees working in seven buildings. Some of its dolls fetched $6,000 at auction. But in 2008 the company downsized, sold its museum, and moved much of its manufacturing operations to China, though the dolls are still assembled here. It’s unclear how many people are working for the firm now. The suit says more than 15.

Homer started working at Annalee in June 2016, just after the partnership headed by Button acquired the firm. But starting in June 2018, according to the suit, Button started sending Homer suggestive emails, asked if she would consider having sex with him, made comments about her being sexually attractive, taunted her for not going out with him and mad sexual comments about Homer and her husband.

After the plaintiff filed a complaint with the Human Rights Commission and the federal Equal Employment Opportunity Commission, Button allegedly emailed Homer, saying that Homer was untruthful because she said the hearings on the complaint were “forthcoming,” but the investigators had 18 investigations to complete before looking at the complaint. He ended the email with “I’m requesting your resignation,” according to the complaint.

After Homer refused to resign and forwarded that email to the investigator, Button allegedly fired her in person but would not put his reasons in writing.