One of the NH Air Guard’s KC-46A tankers took a trip to Alaska for a paint job that depicts the American flag and Minute Man on its tail plus a new name, The Spirit of Portsmouth.

The new paint scheme, according to the Guard, honors both the U.S. Air Force’s 75th birthday and the 400th anniversary of the founding of the city of Portsmouth.

“There’s a lot of emotion,” said Col. Nelson Perron, the 157th Air Refueling Wing commander, who piloted the plane and its new artwork on its homeward journey July 1 to its base at the Portsmouth International Airport at Pease. “To see the Minute Man, the stars and bars, and the flag, I couldn’t stop smiling, and I’m excited to bring tail 034 back to New Hampshire.”

The newly dubbed Spirit of Portsmouth is one of a dozen new Boeing-made KC-46A Pegasus tankers that replaced the aging fleet of KC-135 tankers from the Eisenhower administration that had been stationed at Pease for many years.

It was the only one of the bunch to get the new colors.

The Guard said the tanker’s 52-foot-tall tail is draped in red, white and blue stars and stripes, overlaid by a 16-foot-tall Minute Man. The text “New Hampshire” stretches down the left side of the plane, while the state’s “Live Free or Die” motto adorns the right; both are underscored by 60-foot-long fishing harpoons. The traditional black stars-and-bars near the rear of the jet are now rendered in full color. 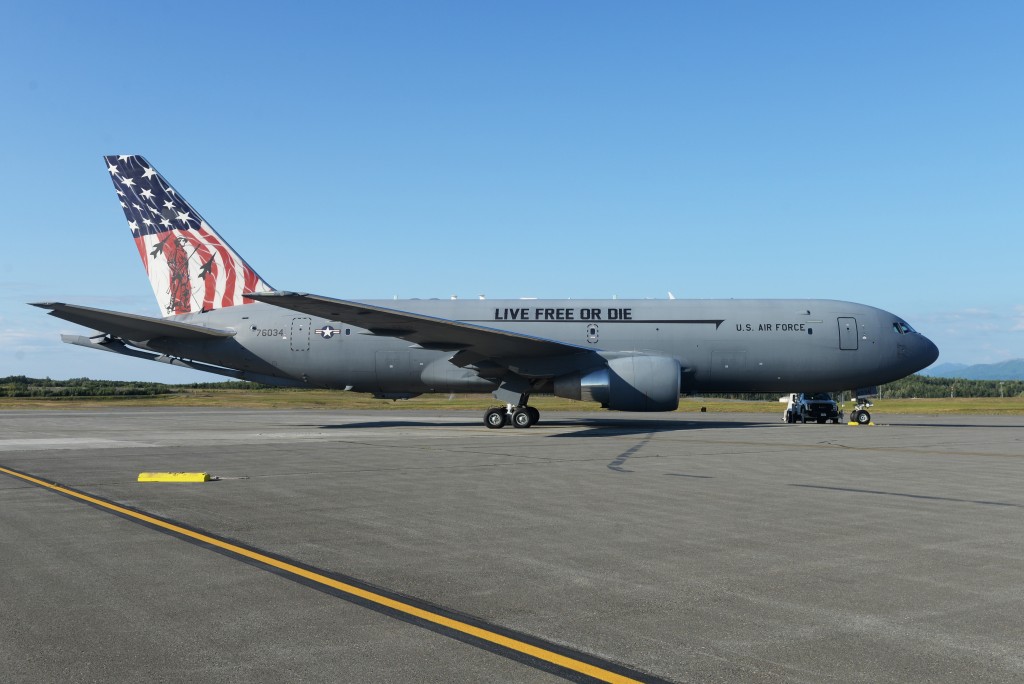 The Spirit of Portsmouth, a KC-46A assigned to the 157th Air Refueling Wing at the Portsmouth International Airport at Pease, sits on the ramp at Joint Base Elmondorf-Richardson, Alaska, where it received its patriotic new paint job. (Photo by U.S. Air National Guard Senior Master Sgt. Timm Huffman)

Once the Guard brass got the approval for the new paint job, the concept was up to Airman 1st Class Rebekka Bloser, a structural maintenance Airman, who describes herself as artistic, but nothing of this scale. According to the Guard, Bloser started the design process by drawing the flag on a piece of fabric, which she draped over a small mockup of the tail of a KC-46 for scaling and then digitized it for approval.

“For an artist, it’s like, ‘Woah, I got something that’s flying around,'” she said in a television interview a few years ago.

This was her first tanker project.

The work was accomplished at a state-of-the-art paint booth, operated by the Alaska Air National Guard’s 176th Wing, Joint Base Elmendorf-Richardson, Anchorage, Alaska.

The 36,000-square-foot facility is the third largest of its kind in the Department of Defense and was constructed in 2009. The paint booth was built with the massive C-17 cargo plane in mind, but it can handle a variety of other aircraft of a similar size. While not necessary for this project, the aircraft hangar can maintain a temperature of 75 degrees, even when the temperature drops to negative 20 degrees during the Alaskan winter. It also includes a curing mode that turns up the heat even higher in order to bake the paint onto planes.

Meder, Bloser and fellow Pease maintainers Tech. Sgt. Jay Cunha, Staff Sgt. Cory Lewis and Staff Sgt. Kevin Canney accompanied the jet to Alaska. Over the next two weeks, it would take the team of five a total of 630 hours, 30 rolls of tape, 82 feet of stencil vinyl and five gallons of paint to make the concept a reality, according to the Guard.

As with any paint job, there was the prep work that needed to be done first — scuffing every inch with sandpaper, suspended in lifts and bucket loaders.

They used a digital projector, hoisted up on a lift, to project the image on the tail. Then they chalked the outline, then tape and masked, spray painted and stenciled their way through to the finished product.

Under the Facebook handle flygirlpainter, Meder said afterwards, “It was a pleasure and an honor to help on this beautiful bird!” 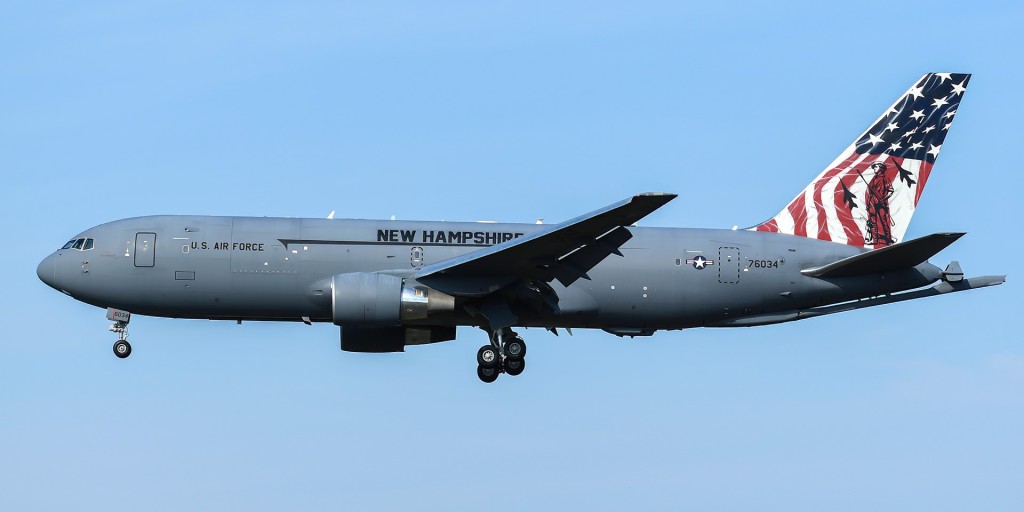 Photographer Dave O’Brien, whose extensive gallery of airplane photographs can be found on Instagram at @top_gunphoto, captured this image of The Spirit of Portsmouth upon its arrival at Pease.

With their arrival starting in 2019, the new fleet of tankers heralded a commitment the U.S. was making to military might around the globe and to the local economy in New Hampshire.

“The KC-46 air refueling tanker is vital to protecting our national security, as well as the future of Pease Air National Guard Base and the entire Seacoast economy and community. I will continue working to ensure that the 157th Air Refueling Wing has the support from Congress that it needs,” said U.S. Sen. Maggie Hassan, D-NH, at the time.

U.S. Sen. Jeanne Shaheen (D-NH), a member of the Senate Armed Services Committee that oversaw the Pegasus contract, noted, “This is significant for the Granite State because Pease was selected as the Air Force’s first Air National Guard KC-46A main operating base, an economic benefit to Pease and the surrounding community.”

Also in July, the U.S. Air Force announced the reactivation of its 64th Air Refueling Squadron at the Pease Air National Guard Base. The 64th will be charged with aircraft refueling missions under the command of the 157th Air Refueling Wing.

Originally formed in 1942, the 64th has been deactivated and activated at various air bases in the country. In 2009, the squadron was activated at Pease, but was later deactivated as the KC-135s went out of service.

“I’m humbled to serve in a squadron with such a proud past and bright future, a squadron on the leading edge and forging a path for others to follow,” Lt. Col. Brandon Stock, the 64th’s commander, said at ceremonies at Pease.