Federal judge gives hints of his thinking on case, with initial decision on hearing several away 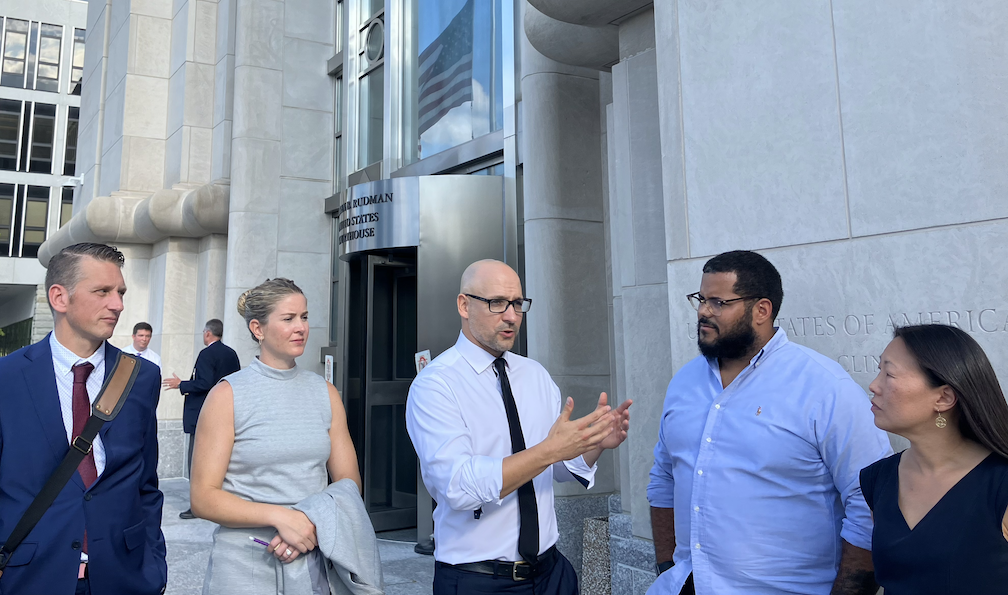 Gilles Bissonnette, center, legal director for the American Civil Liberties Union of New Hampshire, speaks outside the U.S. District Court in Concord after oral arguments in a lawsuit against the ‘divisive concepts’ law on Sept. 14. (Ethan DeWitt/New Hampshire Bulletin)

Gilles Bissonnette, center, legal director for the American Civil Liberties Union of New Hampshire, speaks outside the U.S. District Court in Concord after oral arguments in a lawsuit against the ‘divisive concepts’ law on Sept. 14. (Ethan DeWitt/New Hampshire Bulletin)

Lawyers for state teachers unions and the American Civil Liberties Union of New Hampshire faced off against the attorney general’s office last week over a new law banning certain concepts from being taught in New Hampshire schools.

The law, known by many as the “divisive concepts” law after an earlier title, bars New Hampshire educators from teaching that a person in one protected class is inherently superior to another, inherently racist, or inherently oppressive, even unconsciously, and it prohibits teaching that an individual should be treated differently for one of those characteristics.

Supporters have said the law stops teachers from tailoring lessons against one race or gender. But teachers and public education advocates say it suppresses the ability to present nuanced lessons about history and could lead to unfair punishments, including the loss of educators’ credentials.

Wednesday’s oral argument was the first in the lawsuit, in which the ACLU, the American Federation of Teachers of New Hampshire, the National Education Association of New Hampshire and others are seeking to overturn the law in federal court.

Here’s what Judge Paul Barbadoro said in U.S. District Court in Concord and what it could mean for the future of the case.

A question of vagueness

At the crux of the case is vagueness: Plaintiffs argue the law is so vague that it is not possible to follow – and violates the 14th Amendment. Attorneys for the ACLU and the American Teachers Federation have said the law does not make clear what might be prohibited and what might not be – even with a frequently asked questions document released by the attorney general’s office last year.

The attorney general’s office argues that the guidance document – when combined with the statute – undermines the claims of vagueness.

The U.S. Supreme Court has held that some statutes can be so vague that they are unconstitutional. But exactly how far that principle applies to the “banned concepts” law could determine this case, Judge Barbadoro indicated Sept. 14.

“Facial challenges like this one are much harder to establish than an ‘as applied’ challenge,” Barbadoro told the court. It would be easier, he said, to decide that the law is unconstitutional if plaintiffs had brought a real case of a teacher facing discipline because of an inability to decipher the law. No decided cases so far exist, though the attorney general’s office said last week that one charge is currently pending before the New Hampshire Commission for Human Rights.

“The plaintiffs cannot win merely by positing bizarre hypotheticals saying it might be vague in that context,” Barbadoro said.

But Barbadoro also appeared skeptical of the state’s argument that because the statute could be understood in one way, it was not unconstitutionally vague, citing an opinion by Justice Antonin Scalia in the 2015 case Johnson v. U.S.

“A statute is not vague if it is vague in a single application that has no real bearing to the issues that the court addresses,” he said. “But it doesn’t have to be vague in all respects.”

Barbadoro brought up the fourth concept, asking for clarity.

An attorney for the state, Sam Garland, agreed that the “triple negative creates a problem.” He said that the clause is meant to prevent teachers from advocating that “color-blind” treatment of classes of people is not possible. But throughout the back and forth, the two at times became confused.

“(That) you and I are having so much trouble even communicating about the fourth concept may tell us a lot … ” Barbadoro said. “If we’re having this much trouble, do you think a person of ordinary intelligence (could interpret it)?”

Meanwhile, the state’s case could be complicated by one missing phrase from the “banned concepts” law: a “scienter” clause, Barbadoro said.

Nowhere in the new anti-discrimination law does the statute state that a teacher must have violated the statute “knowingly,” “intentionally,” “recklessly” or in any particular state of mind. That type of clause, known as scienter clause, is often added to criminal statutes in order to set a standard for “mens rea”: the frame of mind of the defendant, which can then determine whether they’ve violated the statute.

The “banned concepts” law is not a criminal statute, but without the clause, a teacher could be found in violation of teaching one of the banned concepts without directly meaning to or having any awareness of it, Barbadoro said. The absence of the clause, he added, makes the case that the statute is too vague slightly stronger.

“The attorney general’s office is saying to educators, or people who offer sensitivity trainings, that if you do something that implies that a banned concept is true, you could be disciplined for violating the statute,” Barbadoro said. “That’s how the attorney general interprets the statute, and that seems to broaden it quite expansively, especially when there is no scienter requirement.”

Barbadoro said that educators could be potentially avoiding advocating a banned concept but find themselves afoul of the law anyway.

“That’s where my core concern is,” he said.

A lawyer for the attorney general’s office pushed back, arguing that the “frequently asked questions” make it clear to teachers which types of lessons can and cannot be taught.

A teacher’s right to speech

Plaintiffs are also attempting to argue that the “banned concepts” law violates a teacher’s freedom of speech. On that point, Barbadoro said, they may have an uphill battle.

The success of the First Amendment argument could hinge on Barbadoro’s reading of Garcetti v. Ceballos, a 2006 Supreme Court case that held that public employees do not have First Amendment rights for speech they give during their official duties. In that case, the Supreme Court ruled that a California prosecutor did not have a First Amendment protection after he was transferred to a different position after criticizing a sheriff’s deputy’s search warrant affidavit.

On its face, that and other cases would seem to bind teachers’ free speech rights in the classroom, Barbadoro said.

“The school board at the local level and DOE at statewide level have unlimited ability to impose any restriction on teaching, as long as it serves a legitimate pedagogical purpose,” Barbadoro said, addressing the state’s attorney.

Barbadoro said that case law has afforded “academic freedom” to professors and teachers in higher education, but that that principle is much more limited when it comes to elementary and secondary-school teachers.

But Barbadoro also noted that there are limits to teachers’ official duties. Citing a Supreme Court decision this year, Kennedy v. Bremerton School District, in which the court held that a school should not have fired a high school football coach who led his players in prayer after games, Barbadoro noted that the court had drawn lines around conduct seen to be outside the educator’s official school role.

“I don’t think they lose that right entirely,” he said, speaking about the First Amendment. “They can’t teach what the curriculum says they can’t teach. But outside of the classroom, it’s entirely different.”

At one point in the hearing, Garland of the attorney general’s office, raised a little-discussed piece of the “banned concepts” legislation: the severance clause.

“If any provision … is held to be invalid, the remainder of such sections, and their application to any other persons or circumstances shall not be affected thereby,” the bill that contains the law, House Bill 2, states.

The proposal – and the state’s mention of it – raises the possibility that the law could be abridged by a future court decision, and made narrower.

Barbadoro blocked the suggestion from being discussed, arguing it would not be fair to the plaintiffs.

“We may have to confront severance later down the road,” Barbadoro replied. “But I don’t feel like the plaintiffs have to respond to this.”

But elsewhere during oral argument, Barbadoro was skeptical of the notion that his ruling should help interpret the statute to make it workable.

“A judge can’t and shouldn’t try to save the statute,” he said. “… It’s either vague or it isn’t. I just have to say what it means. If I said that it meant only conduct that expressly advocates and not anything by implication, it would be a far narrower statute and of far less concern to the plaintiffs. But that’s not what the statute says.”

The Sept. 14 hearing is only the start in a potentially years-long process. The plaintiffs are requesting that the judge grant a full hearing and limited discovery. The attorney general’s office is pushing for the motion to be dismissed before that can happen.

For the plaintiffs, that discovery could prove key: At a press conference after the hearing, attorneys for the ACLU said it could provide more information into how the law is being interpreted and enforced by the five bodies that can take up complaints: the Department of Education, the Department of Justice, the Department of Labor, the NH Commission for Human Rights and the Superior Court system.

“We’re gonna be looking for complaints and how they’ve been adjudicated and the nature of the Department of Education’s involvement,” said Gilles Bissonnette, legal director of the ACLU of New Hampshire.