They’ve ‘barely even scratched the surface,” they say 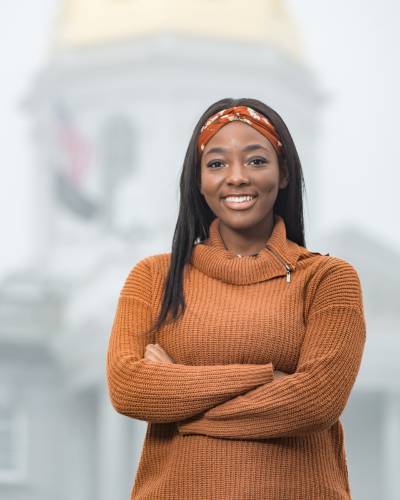 Ronelle Tshiela is co-founder of Black Lives Matter in Manchester and a member of the Commission on Law Enforcement Accountability, Community and Transparency. (Jessica Arnold/Arnold Imaging)

For over a year, Ronelle Tshiela has been advocating for police reform and racial justice in New Hampshire.

She’s done so as a co-founder of Black Lives Matter Manchester and as a member of the Commission on Law Enforcement Accountability, Community and Transparency. She has watched legislators scale back the recommendations she and her colleagues made and listened to prominent lawmakers dismiss the idea of racism being an issue in New Hampshire.

She felt relief in the immediate aftermath of police officer Derek Chauvin being found guilty of murdering George Floyd.

“I will always remember where I was when I heard this verdict,” she said.

But the jury’s ruling is not enough to end her fight – more work needs to be done, she said.

For activists like Tshiela, it was important to underscore that the murder verdict set a precedent for accountability for law enforcement, but it was not true justice because it did not end the problem that led to Floyd’s killing.

“Justice would’ve been George Floyd still being here today,” Tshiela said, “and there is no justice for the dead.”

The path toward reform in New Hampshire has hit obstacles from lawmakers who say the state doesn’t have a race problem and those who don’t think the people should be forced to report racial data on things like traffic stops.

“There’s a lot of work that needs to be done that unfortunately has been blocked by state legislators,” said Tshiela.

For example, Senate Bill 96, would have required police to collect and make public racial data for encounters with law enforcement, but that was removed and replaced with a committee to study the effects of data collection.

“They completely took the teeth out of that bill,” Tshiela said. “That was one of the recommendations that made me feel like we had actually done something, accomplished something.”

It would have been a step forward for both accountability and transparency. “That’s definitely where we need to focus,” she said.

Other activists in the state agree, including Robin Melone, president of the New Hampshire Association of Defense Lawyers.

“I think we have a long way to go,” she said. But she’s frustrated too, hearing over and over again that more work still to be done.

“I’m tired of the same people acknowledging it,” she said. “I want the people who are in the position of legislating and running our state to acknowledge it.”

Melone believes that a more unified message toward reform would be beneficial, specifically from the governor.

“Even when Sununu founded the LEACT commission, he did it by saying that ‘New Hampshire is great, we’re doing a great job,’” Melone said. Creating a commission to counteract a problem while also stating that none exists, she said, is leading lawmakers to say that the LEACT recommendations are “a solution in search of a problem.”

“It was really hard to hear that, and really disheartening,” Melone said. Because of those setbacks, she said that when it comes to looking at the road to reform, “I’m not sure we’ve really started yet.”

“Looking at law enforcement reforms is really critical, and we are on our way to getting some of that work done,” Soucy said.

Some of these measures have fallen flat in the Legislature, she added, referring to SB 96.

“I think that is one we’ll have to continue, we have not reached a consensus,” Soucy said.

Another bill she hopes to act on soon is one to address the Laurie List, which contains the names of police officers in the state with incidents in their work history, like the use of excessive force or planting evidence, which has been withheld from public view. The details of this potential bill are not set, Soucy said, but she is hopeful that an agreement can be reached soon.

“I think it’s important for the public, and to give people more trust in the system,” she said.

Additionally, she believes a key component is for elected officials to do personal education and listening. “We need to do a lot more listening with regard to racial justice issues,” she said.

Such listening, she said, could combat some fundamental misunderstandings on the subject of race. “Obviously there is intentional racism in our country and our state, we can’t ignore that fact,” she said, “but I think some people just need to be made aware of the unique circumstances that people find themselves in.”

She added, “This issue is not going away. This issue is something that we need to address head-on, and it’s not easy, but there are steps we can take.”

For Tshiela, continued work means to keep testifying and “keep fighting” for changes like the LEACT recommendations in the Legislature. Some things, however, are not worth the effort. Tshiela said she was “going to spend a lot less time communicating directly with police departments, because we found that really does not get us anywhere.”

The process so far, exhausting as it is, Tshiela said, has not made significant change. “We’ve barely even scratched the surface.”