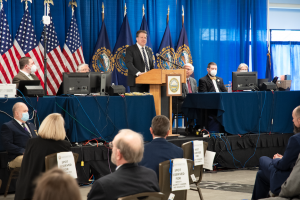 Gov. Chris Sununu announced a new housing initiative during his State of the State address on Thursday.

Announced during Sununu’s State of the State address Thursday, the federally funded initiative would seek to break log jams that have tied up local approval for housing units through financial incentives.

From the new fund, $60 million would go toward flexible matching grants for developers who are producing “multifamily housing projects ready to move to the building stage,” Sununu announced. Another $30 million would be distributed as grants to towns “that can approve permits within six months of application.” And the final $10 million would help towns demolish vacant and dilapidated buildings and toward planning grants that would help towns rewrite regulations to allow them to “facilitate modernizing development in New Hampshire.”

The goal, the governor said, is to help incentivize developers and town officials without being overly punitive.

“One of the issues that we know we have is slow or uncertain approval at the local level. That happens a lot,” Sununu said. “So I want to incentivize that.”

The new fund is paid for by federal monies from the American Rescue Plan, passed by Congress in March. It was not clear Thursday whether the $100 million was coming from unencumbered funds from the rescue plan; a spokesman for Sununu did not immediately respond to an inquiry.

New Hampshire continues to suffer a severe shortage of housing statewide, a predicament affecting home prices, rents, and workforce availability. In 2019, the New Hampshire Housing Authority calculated that 20,000 new housing units would need to be built in order for the state’s housing stock to reach healthy levels.

And Sununu’s Council on Housing Stability, a panel of stakeholders, has its own goal: 13,500 new units in the state by 2024.

But the causes of the shortage are complex, advocates say. Sometimes, it’s a question of getting developers the capital they need to support an affordable housing project over more lucrative development. Other times, a familiar challenge rears its head: NIMBY-ism, the widely used acronym for “not in my backyard.”

But the $100 million could help grease wheels in multiple directions, Margolin said.

“Most workforce housing projects are quilted with a lot of different resources, some state, some federal, some tax credit, some investor, and all that is really necessary to move the project forward,” she said.

But Margolin cautioned that she would be watching the details of the new funding proposals closely.

But she said the often slow pace of approval from many cities and towns is not always a disadvantage. Sometimes, towns simply need more time to vet the projects effectively, Byrnes said.

“I know that comments are often made about things moving slowly at the local level, or things being cumbersome at the local level,” Byrnes said. “But our process is a public, local board-approved process for projects, and so sometimes they can be slow and sometimes getting information from developers and applicants that is needed to approve the project can be challenging for them on their side as well.”

The new housing funding is part of a bipartisan push for housing affordability this year.

That bill would introduce several changes to try to incentivize towns and cities to produce workforce housing, including by giving “preferential access to state resources such as discretionary state infrastructure funds” to towns that entered into a certification program that demonstrated a commitment to increasing the housing.

The bill would also allow towns to set up “tax increment financing” districts specifically for workforce housing, a designation that would allow them to recoup certain construction costs by using future property tax revenues from the developments.

And it would require that cities and towns apply the same density and lot size allowances to workforce housing as they do for any other type of housing in their zoning laws.

“SB 400 will increase some regulatory flexibilities and some incentives at the local level to really move things forward, because that’s where we see things stalling out,” Sununu said.

On that point, Margolin agreed.

“What we endorse is lifting up ‘yes in my backyard’ communities, and rewarding them when they’re provided,” she said. “Because ultimately, we’re convinced that investing in diverse housing stock sells itself. And those communities that have demonstrated a commitment have seen positive outcomes in terms of vibrant communities and longer-term sustainability.”