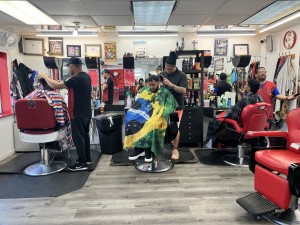 B&P barbershop is located in a neighborhood in Manchester where there are many Latino small businesses around. Salsa and merengue play all day, and the six barbers that work there consider themselves a family. (Photo by Gabriela Lozada-NH Public Radio)

There’s rarely an empty seat at B&P, a small barbershop in the center of Manchester.

Spanish is the most frequently spoken language here, though customers come from a variety of backgrounds. But that’s not an issue for B&P’s co-owners, Jose Abreu and Andres Rodriguez.

They say there is no language barrier when it comes to using this gift that God has given them.

The two co-owners are well-known in the community. Other barbers usually come to them for professional advice. Since the pandemic started, they’ve seen an increased interest in their line of work. More than 30 men, many of who have moved from New York or Massachusetts, want to be barbers.

Rodriguez says these men come with experience from their home countries or with a license from another state. But here, they have to start from scratch, since the New Hampshire has different licensing rules.

Rodriguez says the process to get a license as a Spanish speaker here is complicated.

“There are very few people that have licenses for that reason, because it becomes difficult, ” he said.

In the U.S. 19.4 percent of barbers are Hispanic or Latino. New Hampshire doesn’t track demographic data.

Some barbers in Manchester say there’s not a clear way to connect with an interpreter when applying for a state license. While the final exam is available in Spanish, all other forms, emails, and updates from that office are in English.

That lack of accessibility can make resolving a simple question take a lot longer or cost more money, on top of the investment many aspiring barbers make to complete required classes. Barber school can cost between $13,000 and $24,000, according to the New England School of Barbering.

They also spend from $70 to $100 to apply for one of three licenses at the Office of Professional Licensure and Certification.

Jeffrey Santa Ana, one of three B&P apprentices, said he often relies on the community he has in the barbershop to communicate with the state office in English. He needs to re-apply for his license, but the friend who normally translates forms and communications from the state office for him is out of the country. 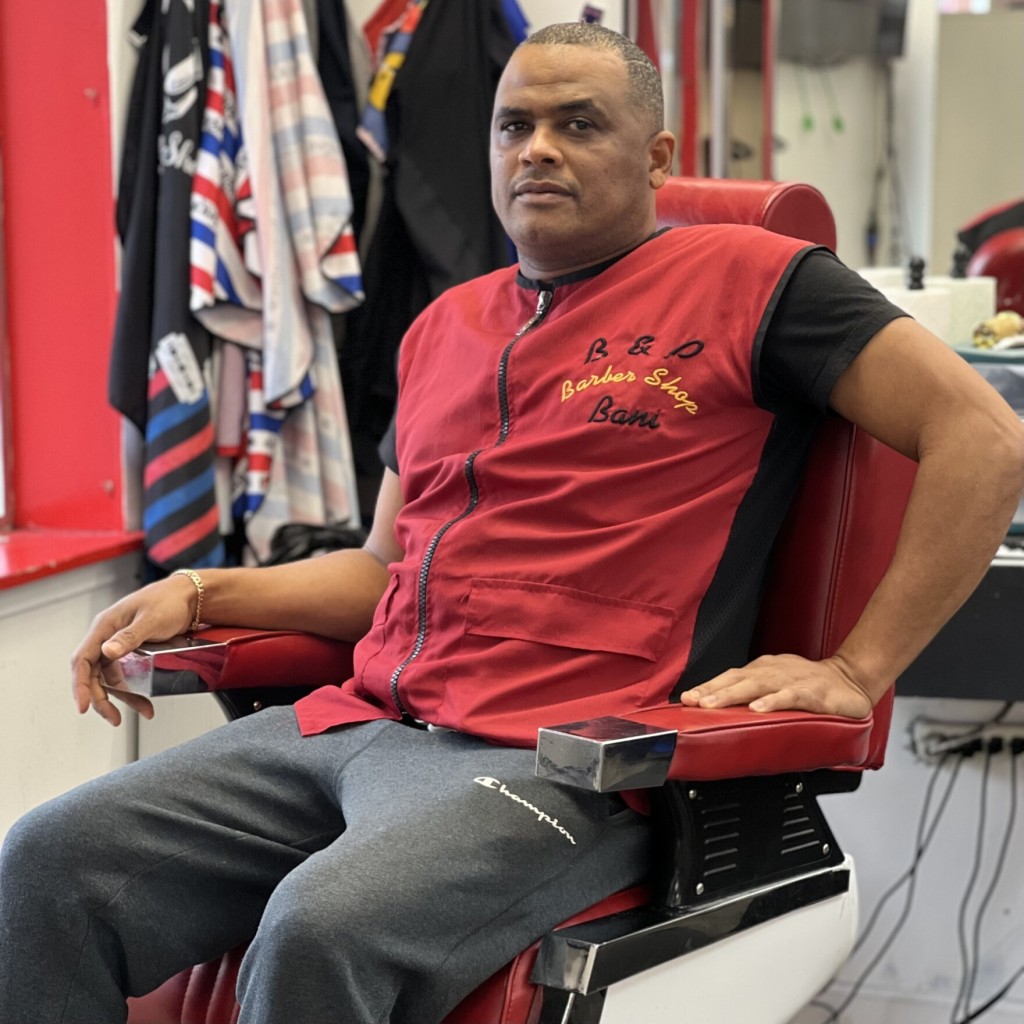 Andrés Rodriguez has been living in New Hampshire for 20 years. He is proud of helping men who just arrived in the state or the country become barbers. But sometimes it frustrates him that his lack of fluency in English does not let him do more. His dream is to become an instructor and open his own shop. (Photo by Gabriela Lozada-NH Public Radio)

“I always have to look for help because it’s difficult to communicate with the office. But I don’t know where to start, so I have to wait for my friend to come,” he said.

Santa Ana says he would like the licensing office to have interpreters available.

But the state office says those services are available. Joseph Shoemaker, who leads OPLC’s division of licensing and board administration, says they can connect people to interpreters, although he says his office hasn’t received a request for these services before.

Shoemaker says the office has a verbal agreement with a company but not an official contract. If there have been issues for folks like Santa Ana, Shoemaker says, staff who answer the phones might just need to be refreshed on how to connect callers to interpreters.

“If our folks need training or retraining or a new type of training we are certainly able to pursue it regularly,” said Shoemaker.

But the barbers I talked with say that from their years of experience making these calls, that service isn’t readily available. That includes Rodriguez, one of the co-owners, who wants to get a master’s license so he can be an instructor and fulfill his dream of opening his own shop.

For the last several months, he’s had issues getting some questions answered about his application, and every time he calls he is sent to a voicemail that tells him he would be contacted in the next 24 hours. But months pass, and no one returns his calls.

After NHPR talked to Shoemaker and showed him that other states have their licensing websites in other languages, he added Google translate to New Hampshire’s page. 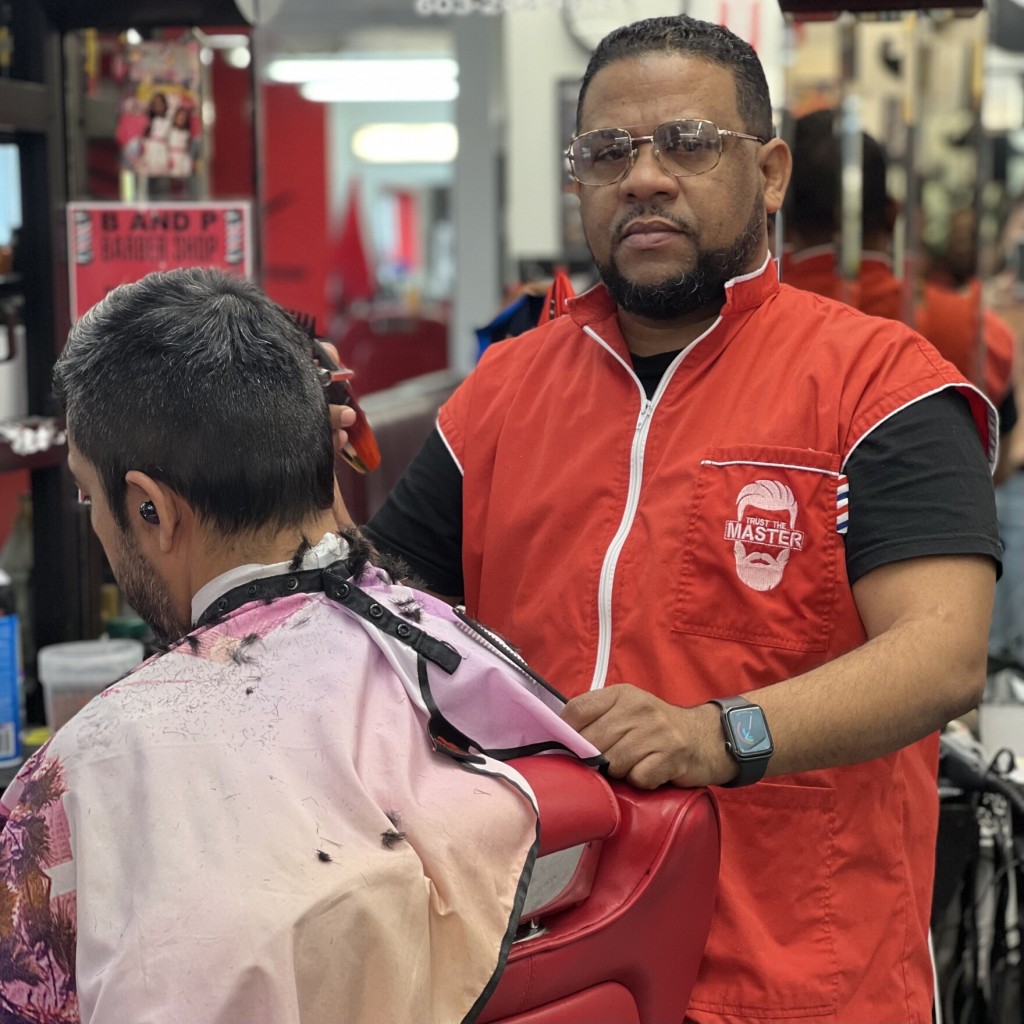 José Abreu, 47, arrived in the United States in 1996. He has been a barber since he was 13 years old. He says it is difficult for Spanish-speakers to become barbers in New Hampshire, unlike in New York or Massachusetts. Licensing offices there indicate what kind of interpretation services are available. (Photo by Gabriela Lozada-NH Public Radio)

But Rodriguez didn’t think it helped too much. He says while the intention is good, Google Translate doesn’t solve what he sees as the root problem: not having a person who can provide basic customer service in Spanish like similar offices in New York, Massachusetts or Connecticut do.

That for him would demonstrate that they care.

Dr. Trinidad Tellez, the former director of health equity for New Hampshire, says the state could better serve this growing community and recognize the diversity of language that exists.

“And avoid miscommunications that sometimes can have very problematic consequences,” she said. “This is completely about assuring high-quality business services no matter what organization or service is provided.”

She says while state offices that don’t receive federal funds aren’t required to have interpreters, state agencies like the Office of Professional Licensure still have solutions available to them.

One example Tellez points to is an interpretation line from ATT where companies and organizations can access coverage in more than 150 languages. That doesn’t require a contract.

A change like that, these barbers say, would benefit not just them, but Spanish speakers in 50 other professions that require a license in New Hampshire.