John Mortimer, founder of Millennium Running, is the Business Excellence recipient in the Consumer Services category for a small organization 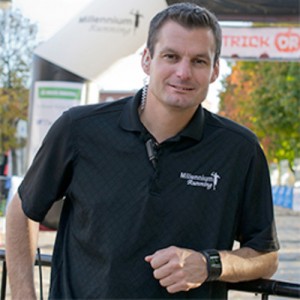 After a storied career as a runner (high school at Londonderry High School, college at the University of Michigan, professional running career for Adidas & Reebok), and a decade of NCAA Division-I coaching (Harvard, Boston College and the University of Kentucky), John returned to his native New Hampshire and turned his sights to event management and founded Millennium Running, LLC in 2010. ”I was fortunate as an athlete and coach to participate in some of the greatest meets and races in the country and around the world,” states Mortimer.  “One of the goals of Millennium Running is to bring some the grandeur and professionalism of those major championship events to a local community.” Inspired by the success of the Millennium Mile road race (which Mortimer co-founded in 1999 with high school running buddy, Matt Downin, and older brother, Andy Downin), John decided to change career paths and devote his resources and time to the creation and development of athletic events on a full-time basis. ”If one can devote more time to an event, the final product will be more rewarding to the participants and sponsors. In turn, charities will benefit greatly from the proceeds of a successful event. In that way, I feel that I will have given back to the community that has so richly blessed my life.” In 2012, Millennium Running expanded from producing its own signature events to providing a full complement of race services that includes online registration and timing.

Millennium Running now services nearly 100 events annually with event services. Mortimer is a New Hampshire native and attended Londonderry High School (’95). Under legendary high school coach, Larry Martin, Mortimer won 12 NH state championships in track and cross country and was a three-time High School National Champion in track. He is a University of Michigan graduate where he won six Big Ten Championships and was a seven-time NCAA All American.  As a professional athlete, Mortimer represented Adidas and Reebok. He qualified for two U.S. National track and field teams in 1997 and 1998 and was a 2004 Olympic Trials finalist in the Steeplechase. He has participated in some of the most prestigious meets throughout Europe and the United States. Mortimer left his mark on the track with personal best times of 8:24.6 for the 3,000-meter Steeplechase, 7:56.1 for the 3,000-meter run, 4:01.7 for the 1-mile, 3:45.2 for the 1,500-meter, 13:48.3 for the 5,000-meter run, 28:46 for the 10,000-meter run. With a marathon personal best of 2:26 from the Boston Marathon, he has also run the New York City Marathon, Honolulu Marathon and the Antarctica Ice Marathon.

Mortimer was honored by being inducted into the University of Michigan Track & Field Hall of Fame. Most recently, Mortimer has received accolades for the unprecedented growth and community outreach of his company.   Mortimer was named to the NH Union Leader 40 Under 40 which honors leaders under the age of 40.   New Hampshire Magazine featured Mortimer on it’s “IT LIST” of 10 individuals that are most influential to NH in 2014, USA Track & Field’s Race Director of the Year in 2016.  In 2021, his company hit the $1 million dollar mark in corporate giving to local charities. Mortimer, his wife Jennifer and their two boys reside in Bedford.