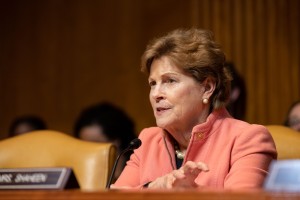 U.S. Sen. Jeanne Shaheen placed blame for the state’s failure to get a larger $67 million in federal rental aid on Gov. Chris Sununu.

In the wake of a federal decision to cut off funding to New Hampshire’s year-and-a-half-long rent relief program, the state’s congressional delegation has announced that some $2.4 million in funding will be headed to Concord.

While the amount is far smaller than the $67 million the state had been expecting to receive form the U.S. Treasury Department, the money will help as a stopgap as officials scramble to figure out what to do for the Granite Staters who are being aided by the Emergency Rental Assistance Program. The program, with federal funds, has been helping pay rent and utility bills for low-income New Hampshire residents since March 2021.

On Oct 18, a published list by the Treasury revealed that New Hampshire was not among the 28 states that are continuing to secure funding for the pandemic-era program. Due to the likely end in funding, the NH Housing Finance Authority has paused new applications for rental relief.

U.S. Sen. Jeanne Shaheen quickly criticized Gov. Chris Sununu for the Treasury action. She and other members of the delegation have said the Sununu administration’s slow rollout of assistance and its “failure to spend these funds effectively” in the first place.

The governor was quick to point his finger at the Treasury department for what he said was an unexpected move.

Shaheen said that the new aid “will not fully replace the money the state left on the table and the full amount needed to run the program … it will provide additional resources that can be used to support the 3,386 residents who were left with applications pending.”

Meanwhile, housing advocates are pushing the state to come up with a solution before Dec. 29, when the program expires.

“I just hope that anyone can come together, identify where the resources are, and make sure we’re addressing the most urgent situation so we don’t see a spike in homelessness right before winter,” said Elissa Margolin, director of Housing Action NH, an affordable housing advocacy organization.

A September investigation by the Granite State News Collaborative found that 750 to 900 people receiving rental assistance are residing in hotels due to a lack of available apartments.