What’s in the state budget for businesses? 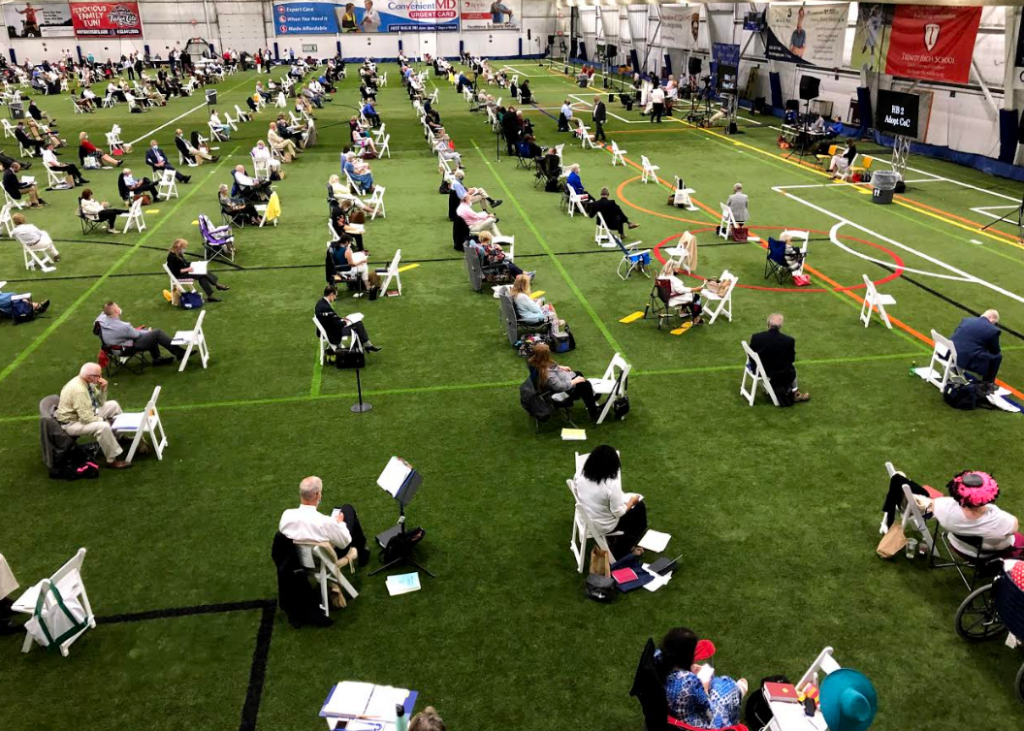 The House met Thursday to vote on the budget at the Sportsplex in Bedford, while the Senate met in Representatives Hall. (Photo by Paula Tracy/InDepthNH)

If you listened to the debate on the $13.5 billon two-year state budget and its trailer bill that  the Legislature passed on Thursday and Gov. Chris Sununu all but promised to sign into law, you wouldn’t think it was about a budget, but about abortion, how teaching about racism is presented in public schools and about public funding of private schools.

There was some talk about various tax cuts, particularly for businesses and warnings about property tax increases, but there was little talk about a new family and medical leave plan, millions of dollars to address the need for affordable housing, or new programs to support microenterprises, broadband expansion and entertainment venues.

“This is a spectacular bill,” said Rep. Laurie Sanborn, R-Bedford, in the debate. “It has $171 million in tax reductions.”

Rep. Steven Smith, R-Charlestown, called it “the Grubby Paws Protection Act” that “set the record for the most tax cuts in one budget.”

But others looked at the budget from the opposite perspective. Rep. Safiya Wazir, D-Concord, said the tax cuts were “mainly for out-of-state businesses and the wealthy” and would lead to property tax increases because of less aid to city and towns and school districts.

In the Senate debate, Sen. Lou D’Alessandro, D-Manchester, pointed out that 56,865 Granite State businesses have no tax liability (and therefore wouldn’t benefit from the tax cuts), and the cuts would mainly affect the one-tenth of one percent of businesses that account for nearly half of business profits tax revenue.

“Are we stealing from the poor and giving to the rich?” he asked. “I think so. Robin Hood in reverse is the image that is pervasive in New Hampshire.

“In your zeal to punish employers from getting continued tax reductions, you are limiting job opportunities for working people,” replied Sen. Jeb Bradley, R-Wolfeboro. “Large businesses employ a lot of people in the state too.”

But polemics aside, how does House Bill 2 – the 220-page companion bill to the budget – actually impact businesses. Here’s a look.

Under the budget, the Business profits tax rate – currently at 7.7%, will fall to 7.5% starting in January 2022. While that cut benefits larger businesses, the cuts to the business enterprise tax rate – paid by smaller companies – is a bit steeper, falling from 0.6% to 0.55% on wages, interests and dividends.

Further, the BET filing threshold has been raised from $200,000 in gross business receipts to $250,000, which is also the threshold for the enterprise value tax base – a big jump from the current $100,000 threshold.

The bill also cut the rate of the rooms and meals tax from 9% to 8.5%. This amounts to about a dime savings for a $20 meal – not enough to result in a dining stampede, but it could make the state a little more competitive when it comes to weddings and large events.

Much has been made of the phaseout of the 5% interest and dividends tax by a percent a year. Again, this won’t help the smallest investors who already enjoy a $2,400-a-year exemption per individual. However, the phaseout begins in 2023, and the whole tax won’t be gone until 2027. A lot could happen politically between now and then.

Businesses also may not feel changes in the unemployment tax for quite some time. The tax currently goes up and down depending on how much is in the unemployment trust fund. The budget makes it harder to go down, by increasing trust fund thresholds that would trigger such a decrease. But HB 2 also takes away the power of the commissioner of the Department of Employment Security to raise the tax when the fund goes low.

Finally, there is the question of property taxes, which might cost a lot of businesses as much, if not more, than business taxes.

Budget proponents argued that property taxes will go down because it cuts the statewide property tax by $100 million. But opponents said it will force property taxes up because the budget suspends aids to towns and cities. But it’s complicated.

The statewide property tax cut means less aid to property-poor towns and benefits wealthier towns. But the budget does give a large chunk of rooms and meals tax revenue to cities and towns, plus more money for school construction and for roads and bridges.

The voluntary Granite State Paid Family Leave Plan – which Sununu had originally offered as a counter proposal to a mandatory proposal based on a payroll tax, which the governor vetoed – would build on a new benefit program offered to state workers that businesses and individuals can join.

Employees who participate will get 60% of their pay for six weeks after birth or adoption of a child in their first year, or to take care of family member with a serious health condition.

The commissioner of the Department of Administrative Services would run the program. A request for proposals will be issued in March 2022, making benefits available by January 2023.

Businesses with more than 50 employees will contract with the winning bidder directly. Smaller businesses and individuals can purchase insurance through Administrative Services, paying a premium of no more than $5 a month per individuals, a rate subsidized by taxes on premiums for third-party insurers providing Medicaid and others offering family leave plans. Coverage would kick in after a seven-month waiting period. There will be a one-week elimination period, and a 60-day annual open enrollment period.

Although talked about for years, the family leave proposal did not go through a hearing process and was a last-minute addition to the budget. It nearly derailed the budget process by angering hard-right conservatives, who were mollified that it wouldn’t start for another year and a half.

SB 2 also creates a new Department of Energy to oversee the Public Utilities Commission. It would take over the administrative functions of the PUC, such as running the Renewable Energy Fund and grid modernization and pipeline development and safety, while the PUC will mainly stick to an adjudicatory role. It would include a newly established Office of Offshore Wind Industry Development.

The budget also creates an Office of Planning and Development in the BEA, taking over many of the functions of the Office of Strategic Initiatives.

The budget also sets up a Covid-19 Micro Enterprise Relief Fund that would use federal funds to aid microenterprises – businesses with fewer than 10 employees – that had to shut down, lay off workers or lost half of their revenue due to the pandemic.

The bill also funds Save Our Stages for venues that did not receive funds from the federal Shuttered Venue Operators Program.

And it sets up a Broadband Matching Grant initiative for broadband providers, political subdivisions and communications districts.