Uptick in unemployment claims could signal return of layoffs 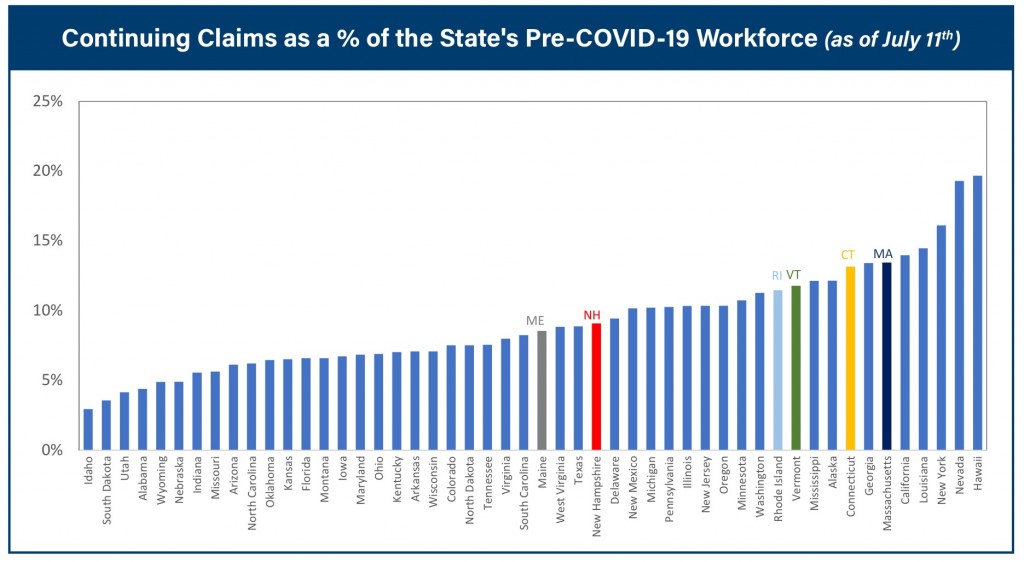 The economic recovery appears to have stalled for a bit in New Hampshire, according to unemployment claims data, just as enhanced unemployment benefits are coming to an end.

For the first time in four months, the initial claims have gone up slightly, showing that layoffs are starting to pick up again, especially in manufacturing, perhaps reflecting the impact of the upsurge in the virus in the rest of the country and the world.

In addition, the number of people going back to work, while still increasing, appears to be leveling off.

Last week (ending July 18) there were some 3,305 initial claims, 375 more than last previous week. That’s less than a tenth of the 39,000 new claims filed in the week ending April 4, but about five times the amount filed before the pandemic. To be sure, there was a very sharp drop of new claims (5,776 to 2,930) from weeks July 11 to July 4, indicating a pickup when the summer unofficially kicked off, but before that drop, new claims declined only slightly for over a month.

Nationally, initial claims also went up slightly after a long decline by 109,000 to a seasonally adjusted 1.4 million.

Nationally, continuing claims fell by 1.1 million to 16.20 million.
An analysis published later by the state Department of Employment Security delves into some of these numbers locally. It places the Covid-related unemployment rate at 9.7%. That’s different – both in the way the rate is calculated and the time period involved – than the official June rate at 11.7%, a decrease of 3.6 percentage points from the May rate. Before the pandemic, the state official unemployment rate was 2.4%.

The sectors with the most improvement in continuing claims seem to be the areas hardest hit – that are mostly affected by the local economy, such as hospitality and retail. Manufacturing as a whole went down, but some sectors went up, such as machine manufacturing and electrical equipment. Previously, manufacturing – an essential business in New Hampshire – had been one of the least affected by the crisis, but that may be changing now, as both the supply chain and the demand suffer as the pandemic spreads to the South, West and in places like India and Mexico.

It remains to be seen how ending of the extra $600 a week in enhanced benefits (which ends this week, with that last check arriving next) will affect the employment situation.

Some companies have complained that workers have been reluctant to return to work, especially at the risk of contracting the disease when they can make nearly as much – and sometimes more – at home. On the other hand, it could drastically cut consumer spending, a key driver of the economy.

On Thursday, the US Senate seemed to be willing to continue enhanced benefits but at a much lower level. There might also be some more funding for small business assistance – but again at a lower level than before.