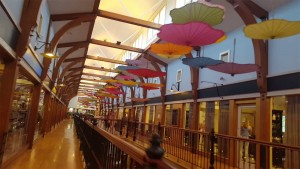 When Powerhouse Mall was being developed in 1985, a Burlington, Vt., department store owner who was eyeing space in the former 18th century mill site in West Lebanon predicted it would become a “retail mecca” for the Upper Valley and beyond.

That department store is now long out of business, just one of countless retailers that could not survive the domination of big-box chains. But even now, as some of those same big-box chains have crumbled under the weight of increased online shopping and yet another economic downturn — the nearby J.C. Penney and Kmart stores on Route 12A are both closing — the Powerhouse Mall still stands, albeit on precarious ground.

“I like to think we’d get back to something that is close to where we were before (Covid-19), but I don’t know,” said Liz Staples, owner of Nature Calls/Bonkers, a store she’s run for 21 years, selling educational, nature and science toys. “The hardest thing for independent stores right now is that while we were closed Amazon was wide open, and I don’t know how accustomed people are to that and if we can lure them back.”

The Powerhouse Mall, like other non-essential businesses under the state’s orders, closed to the public on March 20 and then reopened May 12 — individual store hours vary, and several are offering pre-order and curbside pickup and even home delivery — but the parking lot remains largely empty and during much of the week the two levels see little foot traffic.

“It’s been slow,” Valerie Malmgren said through a face mask from behind the counter of Something Sweet, the chocolate truffle and candy store that also sells jigsaw puzzles.

Malmgren, who drives to West Lebanon daily from her home in Rutland, Vt., opened her candy shop in 1998, a couple of months after the women’s apparel store Clay’s opened and two years after EMS, now the oldest tenant in the building, opened in 1996.

“There have been some really good days,” she said. “We’ve sold 20 puzzles since we reopened. The first day one woman bought five, (but) for the most part now people don’t want to go out until everything is lifted.”

Last week, Lisa Burke, a cardiology nurse at Dartmouth-Hitchcock Medical Center, popped into the store to indulge her “affection for confection” while her boyfriend was “looking around” at L.L. Bean next door.

“We’re actually trying really hard to shop locally and support businesses that are supporting their employees,” Burke, a Lebanon resident, said as she paid for a bag of five truffles.

Small retail businesses, already struggling before the pandemic, are in an even more precarious position now, according to Elke Reichert, regional district manager of the seven-store Clay’s chain that closed its Hanover store in 2015 but still operates at the Powerhouse Mall.

“If we don’t get people to come out and support us, we won’t have a mall,” she said.

Although the mall has traditionally hosted holiday events featuring Santa Claus, the Easter Bunny and trick-or-treating — the last Halloween event attracted an estimated 800 kids — it recently introduced a “Sip, Snack & Shop” on the first Thursday of every month, when stores stay open until 7:30 p.m. and customers are treated to wine and nibbles.

Then, in order to snare the elusive male shopper, the group organized a “Men’s Bourbon & Bacon Night” prior to the holidays that featured bacon-laced appetizers — bacon coated chocolate strips, anyone? — and bourbon cocktails that could be enjoyed in the stores.

“It’s easy for us to get together and exchange ideas and share experiences on what works and doesn’t work for us,” said Jennifer Driscoll, co-owner of InfuseMe, a store that sells 65 varieties of artisan olive oil and balsamic vinegar and other pantry accouterments.

Driscoll saw her online sales increase from 22 packages shipped in February to 100 packages in April as she more aggressively promoted her business online while the mall was closed. But even with the online spike, Driscoll said her business is down nearly 70% — which speaks to how critical in-store traffic for a store where samples and taste-testing drive sales.

The social aspect and face-to-face interaction with customers — many of whom have become familiar over the years — is a major reason Michelle Ryerson said she has been in the retail business for nearly 30 years.

Ryerson, owner of the women fashion accessories store Jewelia, is on her third store at the Powerhouse Mall. She opened her first, GabriAnna, a children’s clothing boutique, in 1991 and then a women’s apparel and accessories store, ElliStar, in 2001.

“When I opened my kids store 30 years ago there was no T.J. Maxx, no Kohl’s, no Walmart,” said Ryerson, and the 1990s were a boom time for shopping malls across the country. Her second store “did phenomenal until Amazon hit,” and she closed it in 2013.

But the accessories part of her business — French-made celluloid side combs, barrettes, jaw clips, headbands, sterling silver earrings, scarves, shawls, handbags and purses — continued to sell, and when she opened Jewelia in 2006 she focused on “things that sparkle.”

“With accessories, people like to see what they are buying,” Ryerson said. Nonetheless, to draw people into the store after the recent shutdown, she had to mark everything down 25%.

“I’m going to keep it that way for a while,” Ryerson said. “Selling something at 25% off is better than not selling anything.”

Preston, who opened Rylee Anne’s Boutique on Black Friday last year, said her goal is to cater to budget-conscious teens and young women.

“Growing up here and going to places like T.J. Maxx or to Hanover, I couldn’t afford it,” she said. “I saw a market for cute clothing but at an affordable price.”

Unlike many brick-and-mortar stores that have migrated online, Preston launched her boutique sales business online before setting up shop in the mall.

“Originally (it) was supposed to be only an online store because eventually I was going to relocate, but then this location opened up and it was too good an opportunity not to take,” she said.

And even after the pandemic shut down her store when it was in its infancy, the reopening drew people in droves.

“The first week there were a lot of customers, a lot of people I’d never seen before. I was shocked,” Preston said. “The second week was slower when the weather was warmer and people wanted to be outside, but still better than I expected. I ask people when they come in where they heard about us, and most say through Instagram.”

As local landlords — most of the shopping plazas along Route 12A are now owned and managed by out-of-state commercial property firms — Copeland and Holleran agreed to provide relief on rent if store owners requested it during the shutdown, according to shop owners.

Like other shopping centers along Route 12A, the Powerhouse Mall has vacant retail spaces — an end unit on the second level that once sold dance apparel and the former Lindt chocolate store in the carriage house in the parking lot.

“It’s a family here,” said Staples, owner of Nature Calls/Bonkers, said of the support Powerhouse Mall merchants have for each other. “I love this building. I wouldn’t want to be anywhere else.”

John Lippman is a reporter for the Valley News. This article is being shared by partners in The Granite State News Collaborative. For more information visit collaborativenh.org.