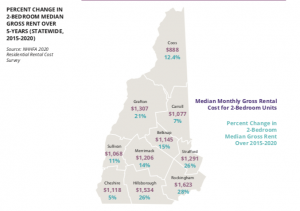 Rockingham, Hillsborough and Strafford counties have seen close to a 30% increase in the median rent for a two-bedroom unit over the last five years.

That’s according to a housing market report released this month by the New Hampshire Housing Finance Authority, showing Rockingham County at a 28% increase and Strafford and Hillsborough counties at 26%. Merrimack County’s increase during that span is 14%, and the statewide increase is 22%.

Rising rents are occurring with a predicted migration of Boston area workers to New Hampshire, now that many companies have implemented work-from-home policies for the foreseeable future. There’s likely to be an impact on the Granite State’s housing market as a result, the report notes.

Russ Thibeault, founder of Applied Economic Research, wrote in the NHHFA report that with COVID-19 work-from-home policies “cutting the umbilical cord to expensive housing and work space in and near Boston,” it’s likely New Hampshire will see more migration into the state.

That’s a good thing, Thibeault said, but the state needs additional affordable housing infrastructure if it wants to accommodate that migration.

Thibeault said affordable housing was not cited as one of the top factors attracting migrants to New Hampshire, “meaning that it is mostly those with higher incomes who can afford to move here.” That ultimately will pose a major issue for the expansion of the middle-income labor force, he said.