Businesses won’t have to pay any taxes on forgiven Payroll Protection Program loans.

“Excited to move forward with yet another tax cut for the Main Street small businesses of New Hampshire,” said Governor Sununu in a statement. “This plan is a win-win.”

Many businesses definitely got a win thanks to the $800 billion PPP, which Congress passed at the start of the pandemic, and ended on June 1. While the final numbers are not in, as of Memorial Day, the program has thus far pumped nearly $3.72 billion dollars into at least 25,000 New Hampshire businesses. (There were more than 40,000 loans, but many business got two.)

“The revenue surplus this 2021 fiscal year more than covers the lost revenue caused by the passage of this bill,” wrote Rep. Patrick Abrami, R-Rockingham, for the House Ways and Mean Committee.

But whether the bill will primarily help “Main Street small businesses” as Sununu put it, might be open to debate, since it only will help those businesses that are profitable and large enough to clear BPT filing threshold – currently $50,000 gross receipts from all business activities, but about to increase to $92,000 thanks to SB 101, a bill passed by the House by voice vote shortly after it passed SB 3.  That bill is amended and needs to go through a committee of conference before it goes to the governor. 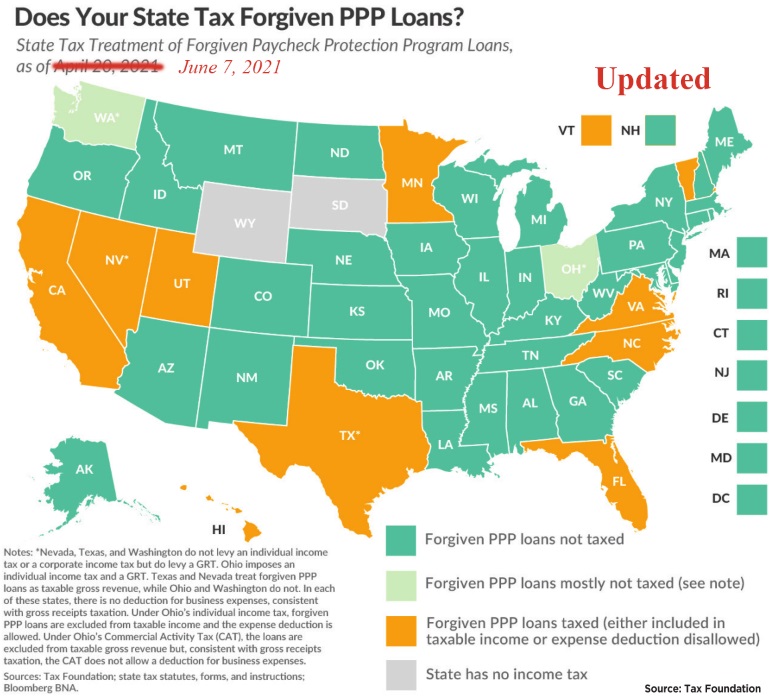 Most small businesses pay the Business Enterprise Tax, which is not affected by the bill. And while most of those who pay the BPT are located in New Hampshire, the bulk of BPT revenue comes from out of state companies.

While the bill easily passed the Senate, the House committee took its time, holding four hearings. After hearing from business groups, Abrami reported, “Not taxing relief funds is a way in which the New Hampshire government can help its businesses fully recover   from a downturn in business levels not caused by business, but by the necessary action of government to ensure the health of all its citizens.”

The committee unanimously recommended passage and the House did so with a voice vote, one of the last votes of a marathon two-day session. Since the bill was not amended, it will go right to the Governor as soon as it is officially enrolled.

If New Hampshire had not acted, it would have been one of seven states that fully taxed PPP revenue, and the only one in the Northeast United States (as of early May). Congress – despite some pushback from the Internal Revenue Service – made it clear that it did not want to tax the revenue, and most states automatically conform to the federal tax court. New Hampshire, however, decides every few years what part the outdated federal law it adopts, and in this case the 2018 federal tax code requires the taxation of forgivable loans, so it had to pass a separate bill on PPP revenue.

Although most of the loans have yet to be forgiven, there is every indication that they will be, though the process has been slow.

The U.S. Small Business Administration, which oversees the program, approves and guarantees loans – which are actually issued by banks and other financial institutions – also forgives them, if the funds are expended on payroll and other allowable expenses like rent, utilities, mortgage interest and other expenses related to the pandemic.