Sununu promises ‘tax cuts for everyone,’ but BPT reduction isn’t in his budget plan 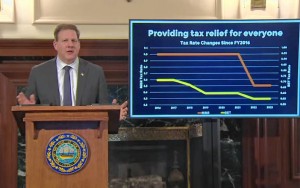 Gov. Chris Sununu proposed cutting the rate of the business enterprise tax in his $13.5 billion budget presentation on Thursday, but he was silent on the business profits tax, which lawmakers in his party also want to cut.

His proposal also doesn’t go quite as far as the Republican legislative leadership wants in cutting the BET, though he does want to more than double the filing threshold.

In announcing his proposal to cut the BET rate, along with rooms and meals tax, and the interest and dividends tax, Sununu said that his budget includes “tax cuts for everyone. Whether you are a small business just starting out, a family of four looking to enjoy a meal out, or are retired and enjoying life in the Granite State, we are providing equitable, across the board tax relief for the people of our state.”

But when it comes to businesses, not everyone is included, since the BET is mainly paid by smaller businesses and the BPT payers are usually larger and often located out of state. But that hasn’t caused very much griping among his party or business advocates.

“Targeting small business is obviously step one, since they have been the ones the most hard hit by the pandemic,” said Senate Majority Leader Jeb Bradley, R-Wolfeboro. “We have already lowered the BPT a lot. If there is only so much tax relief to go around, cutting the BET makes the most sense.”

Even Susan Almy, D-Lebanon, ranking member of the House Ways and Means Committee said, “If you are going to cut some taxes, the BET is better because the businesses are not as large, but it will be at a cost that they may not get the services they want.”

“It’s great that he is cutting the BET,” said Bruce Berke, New Hampshire director of the National Federation of Independent Business.  “For small businesses, it’s a more significant liability than any other tax. I don’t think that it is a huge omission he didn’t discuss the BPT today.”

“I can’t argue with that,” said David Juvet vice president of Public policy Business and Industry Association, but the fact that the BPT was not included is “disappointing. Companies are struggling right now, and it is helpful to do something that will help all companies, not just focus entirely on the small business community.”

Sununu proposed cutting the BET from 0.6% to 0.55% of what a business pays out in wages, interest and dividends. He also is seeking to increase the filing threshold before a business has to file the tax, from $107,000 to $250,000.

The latter provision will remove the filing requirement for some 30,000 businesses, but it is more likely to save them more paperwork than money, because nearly half of the approximately 75,000 who file don’t owe any taxes, according to Almy.

Lawmakers are already considering legislation identical to the governor’s proposal, introduced by both the House speaker (House Bill 10) and the Senate President Chuck Morse (Senate Bill 13), that would have cut the BET to 0.55% this calendar year as opposed to the budget biennium, which starts July 1, 2021. The bill than cuts it down to 0.5% in calendar year 2022, which would start next January.

The bills would also cut the BPT, currently 7.7%, to 7.6% this year and 7.5% the next. That would cost the treasury roughly $138 million over the next four years, including nearly $79 million during the biennium, according to the state Department of Revenue Administration. Proponents say that measure would create more business activity. The DRA fiscal note did not break down the cost of just cutting the BET.

Morse said he would still push for a BPT cut.

“We have to lower the BPT,” he said.  “We firmly promised it.  But this sends the right message, to keep taxes down and live within our means.”

Morse noted that the interest and dividends tax cut goes further than his bill, which would raise the exemptions for those over 65.  Actually, the budget presentation doesn’t spell out the amount of the governor’s I&D tax cut, just that he favors phasing it out over next five years.

There is a bill that would do just that proposed in the House, HB 568, by gradually increasing exemptions. That would cost $15 million during the next biennium, though eventually more than $100 million a year.

One source indicated that the governor may be considering cutting the I&D tax rate by a percentage point each year instead. The governor’s press office did not respond to an inquiry on the matter – or about the absence of the BPT – by deadline.

Sununu was more specific about his rooms and meals tax cut, lowering it from 9% to 8.5%, while also increasing the share towns get from rooms and meals revenue to 40%.   This cut won’t affect businesses directly – indeed, it might cut into their commission for collecting the tax – and the cut isn’t large enough to alter most people’s dining or hotel decisions.  But Berke said that it could help restaurants and hotels attract sponsor functions and group bookings to New Hampshire as opposed to other states.