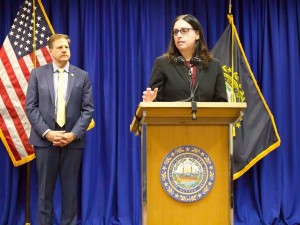 ‘No one should want testing and not have it,’ said state Health and Human Services Commissioner Lori Shibinette in announcing expanded Covid-19 testing for businesses.

New Hampshire businesses that want to conduct Covid-19 tests on employees who closely interact with customers or each other can send them to a New Hampshire Division of Public Health testing site for free, Health and Human Services Commissioner Lori Shibinette said Tuesday.

In addition, companies with 50 or more such employees can request a mobile testing van come to their site.

The announcement came as the state continues to ramp up its testing capacity, allowing it to expand the criteria of who can be tested without a doctor’s order.

A shortage of swabs had been limiting the number of tests provided in New Hampshire, but the state received 2 million of them over the weekend, so that is no longer a factor, allowing people to get tested the same day and get results a few days later.

“No one should want testing and not have it,” Shibinette said.

A few weeks ago, the state opened up testing to people with underlying health conditions and all those over 60. Last week, it expanded testing to those who live with or care for them. And on Tuesday, the state opened it up to all employees where social distancing is difficult. Shibinette gave hairdressers as an example.

The announcement came following a slow weekend for testing, due to the Memorial Day holiday. As a result, the state reported one of the lowest numbers of new Covid-19 cases in weeks – 34, though there were four deaths, all in nursing homes.

It also came as a few businesses flouted some of Gov. Chris Sununu’s reopening guidelines over the weekend, including a small racetrack in the North Country.

There were also reports of some small Seacoast hotels accepting out-of-state visitors and using employees without masks, in violation of universal guidance. Sununu said he had referred the racetrack to the Attorney General and said he might have some news for reopening lodging facilities on Friday.

The governor’s reopening task force had recommended lodging to be reopened for Memorial Day weekend, but Sununu we said the state isn’t ready yet.

Sununu said that the state would examine guideline violations on a case-by-case basis, preferring to work with businesses rather than prosecuting them. But he asked businesses to be patient and obey the guidelines if the economy is going to reopen safety.

“It’s a tough ask, I know,” he said. But it is not OK for a business to say, ‘I’m going to go bankrupt, so I’m going to ignore the guidelines.’”

As for employees not wearing masks, Sununu said, “I’m not asking consumers to call a snitch line. I don’t believe in that.”

While employees are required to wear masks under the guidelines, the general public is not. The state does recommend wearing masks when social distancing is difficult, not so much to protect the wearer, but to those exposed to him or her, such as employees.