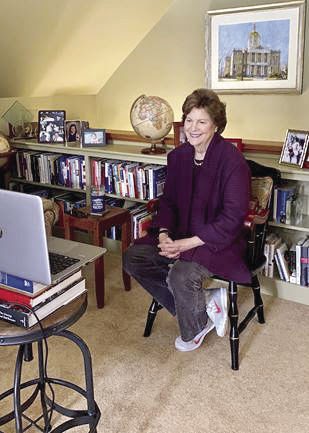 ‘State and local governments are really on the front line of this pandemic,’ said U.S. Sen. Jeanne Shaheen, D-NH, during a conference call with municipal officials.

As cities and towns continue to rack up expenses related to the Covid-19 pandemic while at the same time anticipating a drop in property tax revenue, U.S. Sen. Jeanne Shaheen promised them flexibility when it comes to the stimulus payments coming out of Washington.

“State and local governments are really on the front line of this pandemic,” Shaheen said Wednesday during a conference call with New Hampshire mayors and municipal managers.

Shaheen said a new stimulus package introduced in the House will have more money for municipalities. She also said the $1.25 billion already sent to New Hampshire as part of the CARES Act can be used now to help plug some of the Covid-induced gaps.

Cities, towns and school districts have incurred unanticipated expenses because of the Covid-19 response, and according to many of the local leaders on the call, the financial future is fraught with uncertainty. July 1 tax bills could spell trouble for a lot of communities.

Franklin Mayor Tony Giunta said his city is bracing for the worst.

“Franklin is approaching 30% unemployment,” Giunta said. “If I was among that 30%, I wouldn’t be sending a check on July 1.”

“We are seeing the hit locally from the financial perspective,” Craig said. “We are anticipating a decrease in revenues.”

Craig said that, while the revenues are likely going down, her city and others have laid out money to cover the costs associated with the pandemic response. Those costs can range from money to pay first responders, to pay for personal protective equipment, and cleaning and disinfection of public space

There’s also the costs being pushed onto schools districts.

Somersworth Mayor Dana Hilliard said his city’s school district has struggled to make sure students have equal access to remote learning. That means making sure poor and disadvantaged children have internet connected devices.

“What most school districts have learned with going remote is that inequality comes right back,” Hilliard said.

School districts need to look toward the coming fall semester and be ready to supply all students with access to remote learning devices, and that will cost money.

Concerns about the coming fiscal year range from Portsmouth Mayor Rick Becksted’s concern that his city might have to cut staff to Claremont Mayor Charlene Lovett’s concerns that local nonprofits are missing out on grant funding while also losing out on the ability to host fundraisers.

Shaheen said the new stimulus package introduced this week in Congress will contain money to deal with many of these concerns, as well as money for expanded testing, money for emergency housing, an expanded paycheck protection program, and more $1,200 payments for individuals.

The bill may not come up for a vote in the Senate until the end of the summer.

Shaheen said the money already sent to New Hampshire in the first round of stimulus, totaling $1.25 billion, can be used now to help municipalities.

“I’m assuming many of you have used dollars meant for other things to deal with the pandemic,” Shaheen said.

Money is coming in the form of FEMA reimbursements, but that typically cover 75% of expenses. Shaheen is looking into getting 100% FEMA reimbursements in the next stimulus bill, as well as building in more flexibility for how the money can be used to allow cities and towns to fill budget gaps created by the crisis.