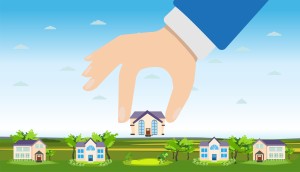 On June 11, 2021, the Fox News YouTube channel posted a clip of their host, Tucker Carlson, talking about a little-known but very impactful corporation: BlackRock. Tucker, a man I loathe 99.9 percent of the time, spoke about how BlackRock is slowly but surely gobbling up homes in many parts of America by outbidding families looking to buy them.

Why would a venture capital firm offer $200,000 over the asking price for homes, guaranteeing they win the bid? Once they own the home, they can rent it forever, making far more in profits – and they do.

According to an article posted in The Atlantic, “a quarter of all single-family home sales went to landlords, aspiring Airbnb tycoons and other types of investors. All told, nearly a third of American house sales last year went to people who had no intention of living in them.”

This type of manufactured scarcity and consolidation drives up the cost of owning a home. Inflating selling prices leads other homesellers to raise their profits to pull in more money, and who wouldn’t want an extra $200,000 when selling their home? But there’s something else that we’re giving away by allowing these massive corporate conglomerates to buy up all of America’s homes and rent them until the end of time. The American Dream.

For the last several generations, Americans have relied on single-family homes to build a nest egg for retirement (and nowadays I wouldn’t count on a solid Social Security check, given what a fit Congress threw about veterans benefits legislation this year). They allow you to build equity; they’re a place to raise a family; they allow your kids to stay in the same community long enough to make friends, get involved with their local community center, and saves them the experience of moving every year, as often has to happen with apartments. They provide families stability. Homes build communities.

If you’re reading this, ask your kids if they or people their age think that homeownership will ever be in their grasp. The answer you’re probably going to get is “no.” This is a tragedy in the wealthiest nation in the world, where we are blessed by abundance and opportunity. But it’s our responsibility to defend that opportunity.

That’s why I will be introducing the Save Our Homes Act of 2023 into the NH House during the September filing period. The bill is simple.

In basic terms, this bill will require single-family homes to be sold to a real living, breathing person. Not a venture capital firm, not a venture capital firm putting on the Groucho Marx disguise and pretending to be an LLC – nothing. There’s a grandfathering exception provided that the next buyer is a natural person, there’s a development exception, provided that the property is sold to a natural person within two years, and there’s a clarification that this will have no impact on mortgages.

I and the 10 other co-sponsors believe it is important to keep family homes for families. We believe that passing this law will help reduce and eliminate homelessness in our time. We will not allow soulless conglomerate corporations to deny anyone the American Dream. We feel that now is the time to do this, for If there were to be another 2008 style housing crash, banks would be desperate to make up their money, making it extremely convenient for companies like BlackRock to swoop in, overbid, take the homes and rent them forever.

I know full well that the forces of the privileged few and the special interests will come out in full force against this good legislation. To paraphrase President Franklin Roosevelt, they may be unanimous in their hate for this bill, but I welcome their hatred. When New Hampshire makes the Save Our Homes Act of 2023 the law of the land next year, we will be saying loudly and firmly that we prioritize real people over corporations, and we believe in a New Hampshire and an America where homeownership is a reality, and the American Dream may so endure for the next generation.”

Joshua Adjutant of Enfield is a Democratic member of the NH House of Representatives.