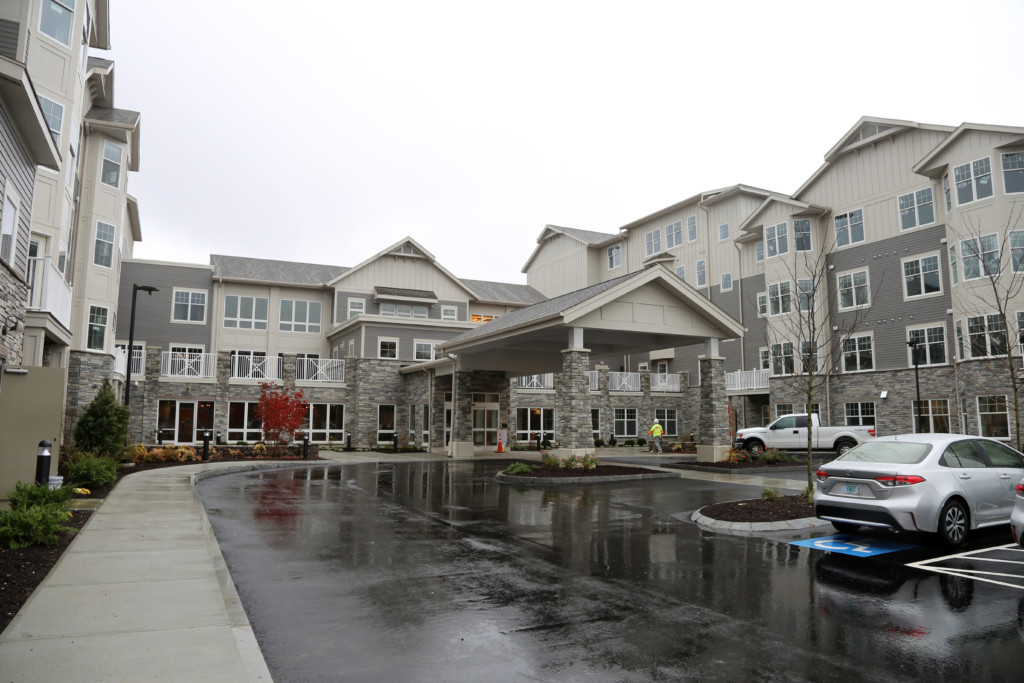 RiverWoods Durham is set to open in mid-November. (Photo by Allegra Boverman)

A few years ago, Raymond and Helen Goodman had planned to downsize and move into RiverWoods Exeter, one of more than a dozen continuing care retirement communities (CCRC) in the state.

“I always knew we were going to move then because, when you hit 80, [stuff] happens” health-wise, said Raymond, a retired University of New Hampshire hotel administration professor.

In 2017, when Raymond was nearing 75, they quickly accelerated their plans after RiverWoods’ parent company announced it was building a new, 11-acre CCRC off of Route 108 in their hometown of Durham. “We were determined to get in on the ground floor,” he said.

They were first in line to make a deposit in early 2018, but they weren’t alone. Within a month, all 150 of the residential units were taken, which is virtually unheard of in the industry.

In addition to the residential units, RiverWoods Durham will also have 72 assisted living, skilled nursing and memory care units. The amenities, designed to enhance an environment combining independent living and community, include a large fitness center, art studio, meeting places, a wide range of nutritional offerings at the dining facilities, wooded trails and raised garden beds.

Ground was broken on the $114 million project last year, and three to four residents began moving in in November. The health center will open in March as assisted living and memory care patients begin to move in.

As the Goodmans prepare to move into their one-bedroom apartment — with a den, 1 1/2 baths and underground parking — Raymond has an up-close perspective on RiverWoods: He was one of the early board members. Later, as board chair, he helped oversee the development and popularity of RiverWoods Exeter, which grew from one campus and 200 residents in 1994 to three campuses and 600 residents in 2019. (They range in age from 68 to over 100.) “It’s hard for me to separate RiverWoods the entity to becoming residents,” Goodman said. For those who were there at the beginning, he added, “it will always be our baby.”

Goodman said small but important initiatives early on set the foundation, as RiverWoods grew from an idea of the founders for a community-based nice-place-to-retire to a startup in the new and emerging CCRC industry. These ideas included having residents as board members and focusing on constantly reinvesting in services and facilities.

“We leaned to a hotel rather than healthcare model, and from the beginning we were resident-focused,” he said, with key decisions made by incorporating feedback from residents, staff and board members.

RiverWoods Group CEO Justine Vogel said the organization has remained true to the grassroots, community-focused ethos of its founders, Maryanna Hatch and the late Rosemary Coffin. It has also evolved dramatically to meet the complex changes of healthcare, the industry and the very definition of retirement and independent living. 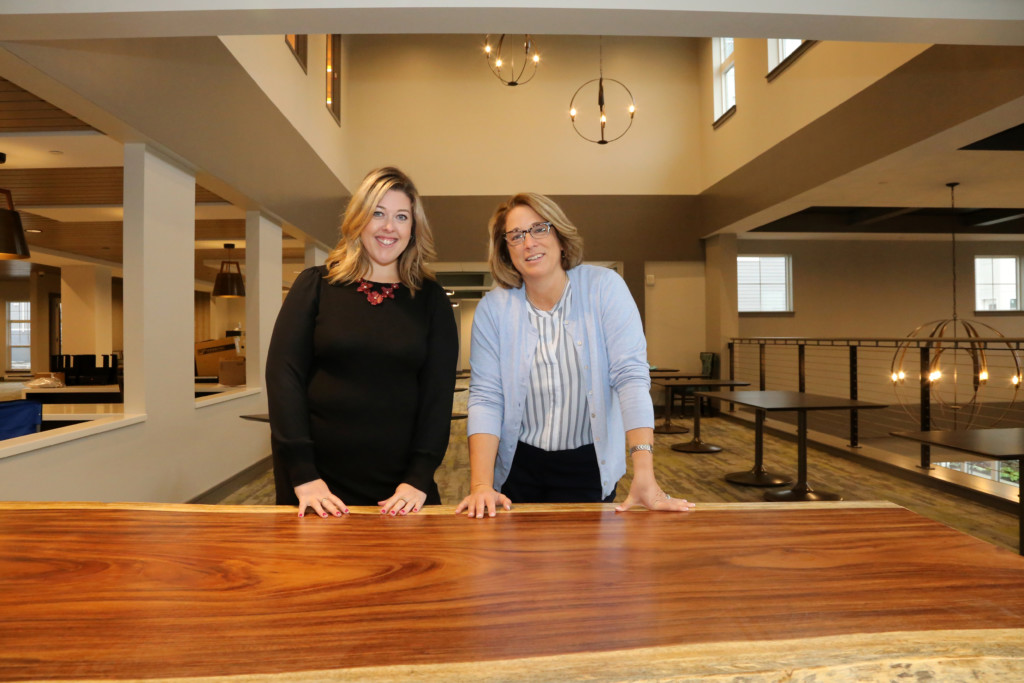 “We are a learning organization and focused on doing good things with the best ideas. We had to be smarter. We are part-hospitality and part-healthcare. We’ve had to adjust every part of what we do from resident engagement to fitness, from nutrition to building management,” said Vogel, who started at RiverWoods Exeter when it opened as director of accounting.

The evolution of RiverWoods has mirrored demographic reality as more than 10,000 Americans turning 65 every day, and New Hampshire is fast becoming one of the oldest states of the country. The U.S. Census Bureau estimates that 26.3% of the state’s population will be 60 or older in 2030, an increase of 40% from 2012. Next door, in Maine, the population over 65 reached 20% in 2018 and the Census Bureau estimates the national 65 and older population will increase from 52 million in 2018 to 95 million in 2060 — and become 23% of the total population.

CCRCs are different from the typical nursing home or assisted living facility. They draw residents who are wealthier, more health-conscious, living longer and more active than previous older generations.

“At the beginning, we had had prime rib every Sunday night. Now we offer vegetarian, organic and informal menus,” Vogel said.

Vogel acknowledged it can be controversial when a not-for-profit like RiverWoods takes risks to expand facilities and services.

“There are some folks who think we shouldn’t take these risks, but we are business- and mission-smart. We don’t take risks willy-nilly, and our mission is to continue to serve an aging population. This has been the case since we were founded because we’ve had visionary board members,” she said.

The process for RiverWoods Durham, she explained, began with a year of discussion and three years of planning, designing and securing financing.

“One of the benefits of being a not-for-profit is that we don’t answer to shareholders. We can focus revenue on serving our residents well,” Vogel said. 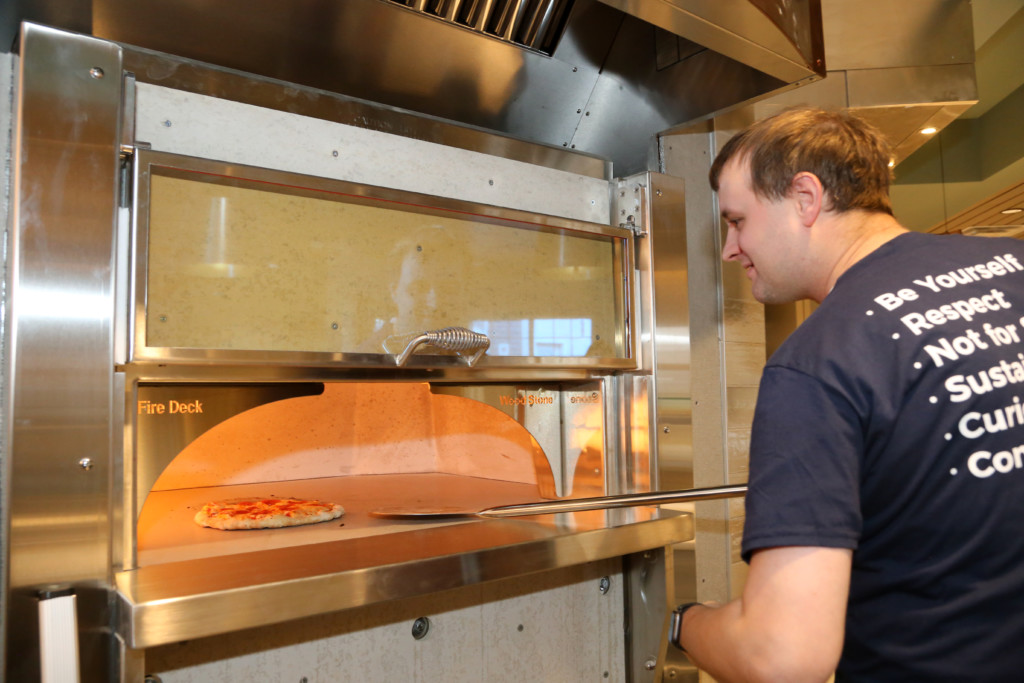 Chef Rob Bullek of Concord tries out the new oven in the kitchen of the RiverWoods Durham. (Photo by Allegra Boverman)

In addition to a medical health screening to prove that a resident can live independently, there are financial requirements. Upfront costs for an entrance fee range from $314,000 to $855,000 at RiverWoods Durham, depending on the size of the residence (the amount is 90% refundable for singles and 80% for couples), and monthly fees ranging from $3,300 to $7,000.

In return, residents get reduced healthcare costs and no worries about landscaping, maintenance, housekeeping and cooking.

“Our apartment is our private space, just like our home,” Goodman said.

But the difference is that community is close at hand. Also, the Goodmans and other residents have hedged their investment against the possibility of serious health decline and financial setbacks while enjoying intellectual, social, cultural and physical fitness pursuits in one location. RiverWoods is set up to serve residents in transition as their health needs require more assistance or special memory care.

“This contract, the 70% flexible contract, is the first of its kind in New England and allows people to use their 70% refundable entrance fee during their lifetime to cover costs of healthcare,” said Cathleen Toomey, RiverWoods’s vice president of marketing. “Every other contract provides a refundable entrance fee to your estate after you pass away. This way, you are using the refundable fee similar to a health savings plan. It has proven very popular.”

There is already a 100-person waiting list for RiverWoods Durham. Vogel figured that Durham was likely to be a popular location, given its proximity to the seacoast and the town being home to the University of New Hampshire, as well as the state’s lack of an income or general sales tax.

But even Vogel was surprised by the amount of interest — Durham residents made up 20% of the early deposits — and the rush to stake claims on residences that had yet to be built.

“It bespeaks how passionate people are about Durham and the word of mouth that we are a reputable organization,” she said.

And for many in the RiverWoods family, the opening of the Durham location has strong karmic roots. “This is truly poetic justice. Maryanna Hatch was originally from Durham, and she had hoped to build the first RiverWoods in Durham, but was not able to pull it off,” said Toomey.