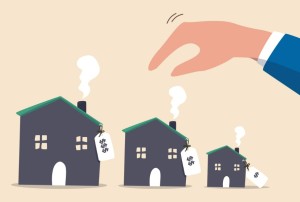 New Hampshire’s housing affordability index sank to an all-time low in September, and two new reports – one from the NH Association of Realtors and the other from real estate data curator ATTOM – show the struggles associated with being able to purchase a single-family home or residential condominium in the Granite State.

The NHAR report for September showed the affordability index statewide was 69 for a single-family house, an all-time low; it was 87 for a residential condo.

The ATTOM report from the third quarter of 2022 shows homes in New Hampshire’s four largest counties by population (Hillsborough, Rockingham, Merrimack and Strafford) have become less and less affordable over the years. That report showed it is more difficult to buy a house in Merrimack and Rockingham counties than it is in Strafford or Hillsborough counties.

The measure is called the housing affordability index. A value of 100 indicates that the typical median-income family has exactly enough money to qualify for a home. Any value below 100 means that a family may struggle to qualify for a mortgage on a home in a particular area. The lower the value, the greater the struggle to afford the mortgage.

According to ATTOM, a California-based curator of real estate data nationwide, the Q3 affordability index in Merrimack County was 70, while the index was 71 in Rockingham County. In Strafford County it was 73 and in Hillsborough it was 74. The national average was 76.

The affordability index is determined by calculating the amount of income needed to meet major monthly home ownership expenses — including mortgage (at prevailing rates), property taxes and insurance — on a median-priced single-family home. It assumed a 20 percent down payment and a 28 percent maximum “front-end” debt-to-income ratio. That required income was then compared to annualized average weekly wage data from the U.S. Bureau of Labor Statistics.

Home median prices are declining, but they are still much higher than they were, and as prices are moderating, mortgage rates are climbing. They’re pushing toward 7 percent the highest rates since 2008.

“At this point we need incomes to rise, not the interest rates,” said NHAR president Adam Gaudet, owner/broker of 603 Birch Realty in Concord. when asked about what needs to happen in order for homes to become more affordable.”

He also said he’s “noticing an increase in price reductions, signaling sellers need to be realistic when pricing their home. Buyers are taking more time looking at homes and they have a higher expectation for what their dollar will get them. Sellers are receiving fewer offers and the offers they’re receiving are back to asking for home inspections. We also do not see buyers offering to cover a potential appraisal gap. The playing field has evened out a bit.”

Interest rates are a factor nationwide.

“Homeownership remains largely unaffordable for the majority of homebuyers in the majority of markets across the country,” said Rick Sharga, executive vice president of market intelligence at ATTOM. “While home prices have declined a bit quarter-over-quarter, they’re still higher than they were a year ago, and interest rates have essentially doubled. Many prospective homebuyers simply can’t afford the home they hoped to buy, and in many cases no longer qualify for the mortgage they’d need.”

It’s a mirror on what’s occurring in the Granite State, where the real estate market has been on an absolute tear the last few years.

“We’re seeing many more price reductions. We’re seeing less multiple offers than I saw last year,” said Chris Ware, owner/broker of the Ware Group, affiliated with Keller Williams Realty Metropolitan, in Bedford. “It’s slowing down greatly and a lot has to do with interest rates. We have some buyers that just now can’t afford what they previously could.”

In New Hampshire’s least affordable county, Merrimack, for example, the median-priced house of $400,000 would require annual wages of $61,542 to afford a monthly mortgage of $2,264, per the ATTOM report.

According to ATTOM, higher interest rates, growing inflation, elevated fuel costs and a volatile stock market all strain the finances of prospective homebuyers, and threaten to stall or reverse a nearly unrelenting rise in home values that began when the market started recovering in 2012 from Great Recession of the late 2000s.

Meanwhile, dingle-family house and residential condominium prices continued to moderate in September, according to the latest report from the New Hampshire Association of Realtors.

While that’s $20,000 less than it was at its peak in the spring, it’s still 10 higher than it was in September 2021 and the NHAR says it’s the highest median price ever recorded for September.

The year to date median price remains historically high as well, according to the NHAR. At $445,000 through the first nine months combined, that’s 13% higher than the same period in 2021, which had been the highest ever to that point.

Condo prices peaked too in the spring/summer to $350,000 in June. They have since moderated to a median of $345,000 in September, but again still higher than they were a year ago by 15 percent.

The state’s priciest county in September remained Rockingham, according to the NHAR data, with a median priced single-family home going for $549,900, which is 6.8 percent more than what it was a year ago.