Industry is struggling to survive in NH, elsewhere

Alejandro Loza entered Mount Washington College to study criminal justice in September 2013, just after its name was changed from Hesser College. While he intends to complete his degree, he may not graduate from the school.

That’s because Kaplan Higher Education Group, a division of Graham Holdings Company, with $3.5 billion revenue, is closing or selling all of its campuses, including the last one of the five former Hesser locations still standing in Manchester. The company said they weren’t attracting enough students or making enough money

Loza said he wished the closing wasn’t happening, but he has no complaints. Kaplan told him he will be able to finish his education in Manchester before the campus closes in April – for free if he studies online – or it will help pay for another college. He is confident he will be able to start a career either in corrections or in private security.

What’s happening to Mount Washington College is far from unique. Just down the Everett Turnpike, Daniel Webster College in Nashua could lose its accreditation, which — warned its parent company,  ITT Educational Services Inc. — could result in the loss of federal funding and “possibly its ability to operate.”

ITT is also in financial trouble, with revenue falling to two-thirds the amount it was four years ago. The company is also being sued by two federal agencies for abusive practices concerning student loans and defrauding investors.

Three years ago, NH Business Review noted that for-profit educational institutions, while only representing a tenth of post-secondary world, was its fastest-growing segment. Today, the industry is struggling to survive because of declining enrollments, large default rates, increasing regulation, unrelenting litigation and negative publicity.

“The landscape has changed dramatically from a few years ago,” said Edward R. MacKay, the director of the NH Division of Higher Education. “Students are migrating back to nonprofits.”

To be sure, all colleges are feeling financial pressures. With the recession over, some students have left the campus for the workplace. Federal and state funding for all schools has decreased. And there are the changing demographics, with fewer young people attending and graduating from high school. They are not only less numerous, but also less prosperous.

There are numerous for-profit schools in the Granite State, but Mount Washington and Daniel Webster are the only ones that offer broad undergraduate degrees.

Hesser was the larger of the two at the time, with five campuses and some 3,500 students. But, by 2013, enrollment was down to 2,300. Kaplan closed the Concord and Portsmouth campuses that year, followed by the Nashua and Salem campuses the next. 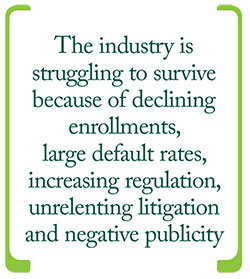 When the college’s board of trustees announced earlier this month that it was closing the remaining Manchester campus in April, it had 500 students, with 300 physically going to classes, the rest taking them online.

“Ultimately it (the enrollment) got to the point where it could impact the quality and not be in the best interests of the student,” said Stephen White, vice president of communications at Kaplan. “It was a very difficult decision for us. It impacts the people who have given their blood, sweat and tears. The students are our top priority.”

Those who switch to classes through Kaplan University, the company’s nationally accredited online division, won’t have to pay tuition, White said. They’ll even be issued a laptop and online stipend, he added.

For those who want to continue their education in face-to-face classes, Kaplan said it is closing a deal with Southern New Hampshire University, agreeing to pay half of the tuition for those who wish to attend classes at SNHU’s Manchester campus, White said.

New England College in Henniker has also announced that it would accept students for the cost of Mount Washington’s tuition, but White said NEC was doing that on its own.

“I think they are doing a really great job,” said Loza of Kaplan. He could finish up his courses on-campus, but was leaning towards an online degree. “That could save me money, but I’ll wait and see if there are other opportunities that are better.”

Finishing up in a bricks-and-mortar school is not an option for Marc Lemay, the communications manager at Greater Lawrence Family Health Center, who had just started working toward his business management degree in July. He was considering the online offer, but was suspicious that he is being asked to sign financial aid forms.

“Why would I need financial aid if it is free?” he asked. “Sounds a little sketchy to me.”

But financial aid can be used for living costs as well, so Mount Washington is simply asking students to update their federal aid application so they would be eligible, said White.

Kaplan has been through this before. It has been making plans to close and merge 13 bricks-and-mortar campuses since 2012, and those closings should be complete, or nearly complete by the end of this year. And in February, it announced a deal to sell 38 other campuses to Education Corporation of America, in an all-stock transaction.

The reason for the closings is simple: enrollment is down, falling another 10 percent since last year. The causes are complex, but a good part of it relates to a federal and state crackdown on student loan defaults, aimed at for-profit schools.

Almost a fifth (19 percent) of the students graduating form those schools defaulted on their loans within three years, according to data from the federal Department of Education, compared to 13 percent for public institutions and 7.2 percent for private ones.

In New Hampshire, Mount Washington’s rate was 16.9 percent and Daniel Webster’s was 7.6 percent. The state as a whole is 8.4 percent, the fourth best in the country, in spite of the fact that the students are carrying the highest debt load in the nation.

When ITT acquired Daniel Webster College, the school was in trouble, faced with losing its accreditation from the New England Association of Schools and Colleges, or NEASC, which in turn would end its federal funding.

Those accreditation concerns have persisted, according to a recent ITT filing. NEASC required that DWC submit evidence by Sept. 4 of how it would meet three standards, relating to planning, organization and financial resources.

The college has to show its progress in developing a strategic plan, enrollment, and an update of the “financial and regulatory challenges” posed by recent enrollment figure and “evidence that ITT provides sufficient continued financial support.”

If the college doesn’t succeed, “we could be forced to close DWC,” said the filing.

Daniel Webster wouldn’t comment for this article, but MacKay said he has been privy to the college’s reaccreditation efforts, “and I think they can do it.”

Indeed, he said, it “may be a good thing” because it could provide more freedom from ITT and enable the college “to be more responsive to the marketplace.”

ITT has its own financial and regulatory challenges. Unlike Kaplan, which is part of a large and profitable media company, ITT specializes in for-profit education, with 144 colleges in some 39 states. Revenue has fallen from $1.6 billion in 2010 to $962 million in 2014, and profits shrank over the same period from $375 million to $239 million. Indeed, in 2013, ITT lost $27 million. This year, revenues continue to fall, but profits have gone up, thanks to the closing of some of campuses.

Some of the regulatory challenges ITT faces are the same as other schools.

For one, new gainful employment regulations — which cut off aid to programs whose students graduate with high debt loads relative to their earnings — went into effect in July, after years of industry opposition. That rule alone will trigger the closing of 1,400 programs that enroll 840,000 students, according to a U.S. DOE estimate.

ITT faces additional challenges thanks to its own student loan program, created to enable students to pay their portion of the tuition not covered by financial aid. It launched the PEAKS and CUSO private student loan programs, originating some $440 million in loans to third-party investors.

In February 2014, however, the federal Consumer Financial Protection Bureau sued ITT, alleging that students were rushed through the loan-application process without getting a good understanding of the obligations.

The borrowers paid 10 percent origination fees and interest rates as high as 16.25 percent, according to the bureau’s complaint.

ITT denied the charges in court and sought to dismiss them on a number of grounds, including asserting that the CFPB didn’t even have the constitutional right to exist. After much of that motion was denied in March 2015, the company filed an appeal.

In May, the U.S. Securities and Exchange Commission weighed in, charging that ITT defrauded investors by not telling them that these loan pools were in trouble. In both cases, the loans were sold to third-party investors with guarantees that would trigger ITT payments if enough students defaulted.

When the PEAKS program was about to go under, ITT made payments on behalf of the student borrowers, so those triggers wouldn’t be met. ITT kept making minimum payments on the CUSO loans, “significantly increasing the amounts ITT would ultimately owe,” the SEC charged.

Instead of disclosing this, ITT assured investors that the loan pool was in good shape, said the complaint. ITT’s “scheme began to unravel” in early 2014, according to the SEC, when it disclosed that it had paid $40 million to settle complaints by PEAKS’ third-party investors over its practices, causing ITT’s stock price to tumble 20 percent.

ITT also has been fending off suits by state regulators and class action attorneys. Indeed, in 2014 and the first half of this year, ITT has spent more than $45 million on legal and professional fees related to “lawsuits, investigations and accounting matters.”

Kaplan has faced its share of investigations and class actions, but the company has been able to resolve them.

In July Kaplan — without admitting to any violations — paid a total of $1.375 million to resolve Massachusetts’ allegations that it inflated job placement numbers and employed unfair recruiting tactics to persuade prospective students to enroll.

And in January, Kaplan paid $1.3 million to settle whistleblower allegations that the company employed unqualified instructors in Texas.

Kaplan has left the industry’s main trade group – the Association of Private Sector Colleges and Universities, which had been criticized for spending too much money aggressively fighting government regulators, rather than trying to work with them.

“There has have been some abuse, a few apples damaging the for-profit brand, though it has not been an issue in New Hampshire,” MacKay said. “But the taxpayers are providing the bulk of the operating revenue, so the federal government has a responsibility to protect the students.”

Bob Sanders can be reached a bsanders@nhbr.com.