Study shows sharp differences, but most are staying home more than normal 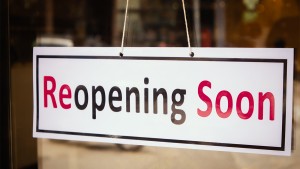 Democrats and Republicans are reacting differently to the ongoing pandemic and economic reopening in New Hampshire, a divide that could make responding to the crisis more difficult, researchers say.

“Rehabilitating the state economy while continuing to deal with Covid-19 is a delicate balancing act, and the vast differences between Democrats and Republicans complicate both tasks immensely,” said Sean McKinley, a research assistant at the UNH Survey Center.

McKinley is an author of the New Hampshire Covid-19 Study, released on June 16. The study — conducted by researchers at the University of New Hampshire and Dartmouth’s Geisel School of Medicine — asked 791 New Hampshire residents about their behaviors during, and attitudes toward, the coronavirus pandemic. The study found vast differences in how people of different party affiliations are responding to the virus, with Republicans six times as likely as Democrats to prioritize reopening the economy over social distancing.

Over the past month, the percentage of Granite Staters who believe that maintaining social distancing was more important than reopening the economy dropped among all groups, including different ages, genders and party affiliations.

“Registered Democrats, undeclareds and Republicans continue to adamantly disagree on this question, but all three groups shifted in their opinion by about the same margin since May,” the authors wrote.

The study found that, overall, New Hampshire residents are less stressed about their finances than they were earlier in the pandemic, but there were also partisan divides here. The number of Democrats who were “somewhat or extremely” stressed about family finances rose 3%, while that feeling dropped 13% among people without a party affiliation and 10% among Republicans. People younger than 30 and those with a high school education or less were the most likely to be concerned about their finances.

Despite the party divides, the study found that many people in New Hampshire still haven’t returned to their normal routines. About one-third of respondents said they had left their homes in the past week to work or to socialize indoors with people they don’t live with.

“Even more than three months after the crisis began, most state residents still recognize Covid-19 as a serious problem and are acting in ways very far from normalcy,” McKinley said.

The partisan differences did not come as a surprise. They align with previous research about how different political beliefs affect behavior, said Lawrence Hamilton, professor of sociology and senior fellow in the Carsey School of Public Policy at UNH. Hamilton conducted research earlier this year that found Granite Staters are more trusting of scientists than they are of political leaders, but he says differing approaches to science can explain some of the difference in how Democrats and Republicans are responding to the pandemic.

“A virus doesn’t care about your political identity, but following Trump’s lead, many Republicans have made it a signifier of political identity to not take Covid-19 seriously, and not take mitigation steps such as staying home or wearing a mask,” Hamilton wrote in an email. “Democrats, conversely, have been more likely to trust scientists, who are pretty much unanimously saying that mitigation steps are important.”

What actions someone takes largely depends on where they get their information, and which agencies they trust, he added. While finding middle ground can be tempting, that’s difficult when even information becomes politically polarized.

“It is human (or political) nature, perhaps, to look for a compromise between two opposing views. But that overlooks the bedrock reality that you can’t compromise with a virus,” Hamilton wrote. “It does not care.”

Belief in or skepticism about science is built into the two political parties, especially around climate change, Hamilton said, which explains why partisan divides have arisen so quickly around the pandemic.

McKinley said that the partisan differences over the pandemic will make it more difficult to make sweeping policy decisions like those made early-on in the pandemic.

“If government policy is required again in the future to aggressively stop the spread of the disease, it’s likely that the state as a whole, and particularly Republicans, would be far less receptive than they were in March,” he said.

Even if there isn’t a need for a second lockdown, the political divide in approaching social distancing will have economic impacts well into the future, McKinley said. With many people still venturing out less than normal, businesses will likely see less business even as they’re allowed to reopen.

“On both preventing the spread of Covid-19 and rehabilitating the economy, the fact that state residents profoundly disagree and are not acting in concert means that government policy aimed at accomplishing either goal is likely to be less effective,” McKinley said.