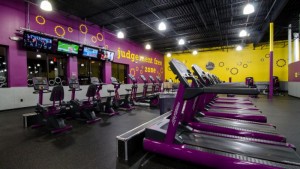 The good news for Planet Fitness is that almost all of its gyms are open. The bad news, at least in the third quarter, is that fewer people were going there to work out.

The Stratham-based fitness franchise is trying to turn that around using its marketing muscle to get people into gyms and engage those staying away.

The pandemic pummeled Planet Fitness in the second quarter as well. Year-to-date, revenue is down 45% and losses are close to $24 million, or about 30 cents a share

Planet Fitness closed all of its gyms and stopped charging membership fees when the pandemic broke out in March. It has gradually reopened and now 95% are.

The company even opened 29 new gyms during the quarter, bringing the total to 2.086. Some of those stores are the remains of smaller chains and locally owned gyms that couldn’t survive Covid, or at vacant retail locations snapped up during bankruptcy or distressed sales.

However, the second wave of the pandemic scared away some new members. As a result, membership declined about 5%, to 14.1 million through the quarter (though flat compared to last year).

There was also a 71.3% drop in equipment revenue due to fact there were fewer new stores to stock, and fewer members in the old stores to create both the need and the ability to replace worn-out machines.

In its attempt to bounce back, it resumed national marketing efforts, including a coveted New Year’s Eve midnight sponsorship slot aimed at people celebrating in their living rooms along with promotion of an app with a “Crowd Meter” that lets users check gym capacity so that they can more easily socially distance while on the treadmill or in the weight room.

“While the celebration in New York will be largely virtual, given Covid-19, the Planet Fitness brand will be front and center as the world says goodbye to 2020 and brings in 2021,” CEO Chris Rondeau said.

Rondeau added that the company’s messaging has and will “reinforce the importance of exercise in the toll the pandemic is taking on people’s physical and mental health,” later adding that exercise builds immune systems. He also emphasized that there have been few outbreaks associated with gyms compared to restaurants and bars.

The company’s mobile app, which has been downloaded by 30% of members, also has features that try to nudge people toward the gym, such as QR code reader for instructions on how to use the equipment as well as the Crowd Meter.

But the company hopes to monetize the app as well, offering a premium version with features including live daily workouts and a variety of trainers to nonmembers for $5.99 a month. Rondeau did say that the company doesn’t view standalone membership as a moneymaking replacement, but as a “gateway to the brick-and-mortar gym.”