‘It’s just been too much for the small staff that we have,’ says agriculture commissioner 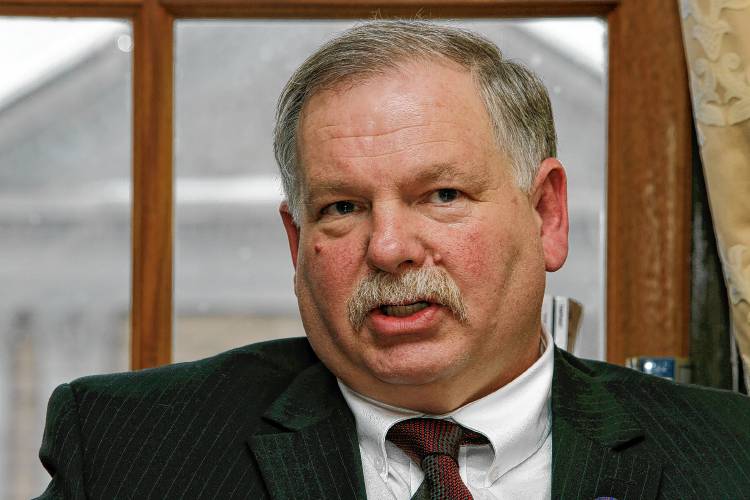 When Glen Putnam learned last week that the state of New Hampshire would no longer certify his family’s dairy farm in Piermont as organic, it came as a shock.

“If your certification runs out, you’re dumping your milk on the ground,” Putnam said of the news. He sells his milk to Stonyfield, which does not accept conventional milk.

“It would mean, if I stay organic, that I find someone else to certify me and start all over,” he added.

He struggled to stay on top of the organic certification paperwork between his day job, his farm chores and his two kids, and he did not relish the prospect of starting over with a new certifier. The Putnams’ Piermont farm had not been breaking even, and he and his wife, Meredith, had already decided to sell as rather than “throwing effort after foolishness.”

They will have to surrender their certification by Dec. 30 and may lose the last of their dairy income.

The state Department of Agriculture, Markets and Food, citing budget constraints, notified 17 certified organic livestock operations as well as 27 processors and handlers whose products include coffee, bread and vodka that the state would no longer certify them as organic. It will continue to certify the majority of the farms it services, including fruit and vegetable operations.

The farmers who received the department’s letters had two options: They could surrender their organic certification by Dec. 30, or they could apply for certification with another certifier, often private organic associations. If they submitted proof of an application, they could continue to list the state as their certifier for another six to 12 months.

“Overall, the work we have to do is increasing,” said Agriculture Commissioner Shawn Jasper. The U.S. Department of Agriculture sets the standards for organic certification. He described it as “a complex and strict standard” with inspections, audits and reporting. New Hampshire is one of only 15 states that certifies organic farms.

“We’ve been unable to keep up with changes and all of the requirements,” Jasper said. “It’s just been too much for the small staff that we have.”

He explained that during the COVID-19 pandemic “we were all asked to reduce our budgets,” and so expanding the staff to meet organic farmers’ needs was not a viable option. He said that he regrets that the department had not started to discuss these changes earlier on.

The department is interviewing candidates for two roles in its regulatory division, and if they are filled, it will be the first time the division has been fully staffed for “over a dozen years,” he said. He said the department would then evaluate if it needs to expand its staff.

Jasper emphasized that the department charges much less for organic certification than private certifiers. For example, a farm that paid the state $800 to maintain its USDA organic status each year would pay a private certifier over $3,000, he said.

‘Not a level playing field’

Putnam spends about $900 per year on his certification, although he recouped some of that cost with a rebate. He had said that finding that money was difficult for farmers “who are just struggling anyway.”

Yet Jasper said the department is “certainly not charging anywhere near what it realistically costs it to do.” To his knowledge, it had not increased its certification fees more than 15 years.

“My personal feeling is that user fees should be covered by users. We shouldn’t be looking to other taxpayers to cover the cost,” he said.

Because of the Department of Agriculture’s limited resources, it had already been turning away farmers who sought certification from the state. He argued that the status quo was “not a fair or level playing field.”

“It’s not a great situation for the state to be in,” Jasper said. “It’s like playing favorites — if you come late to the game, you have to go somewhere else and pay three, or 3½ times as much.”

Jasper told Gov. Chris Sununu that the Agriculture Department will be informing the Legislature on how much it would cost for the state to provide organic certification for livestock operations as well as processors and handlers.

“I’m hopeful that the Legislature will look at this when we move forward and decide that this is something that we should offer and allow us to increase the fees to cover the cost,” said Jasper, a former House speaker.

The problem, though, is bigger than the state’s limited resources. There is a nationwide workforce shortage of certifiers, said Nikki Kolb, who works for Northeast Organic Farming Association of New Hampshire.

Kolb said the state’s announcement came at a time when “the state should be working to build up organic certification and work with farmers to increase resilience in our state and food production.” She listed widely shared benefits from organic farming, including soil health and food security.

Meanwhile, the USDA announced funding of $1.73 million for nine programs to train and recruit certifiers for organic farms on Oct. 7.

Some agricultural operations in the state had already opted to use a private certifier.

Kevin Phelps, the vice president of farm operations at Pete and Gerry’s Organic Eggs, said Pennsylvania Certified Organic, a nonprofit agency, certifies most of their farms, including the five in New Hampshire. When Pete and Gerry’s worked with the state of New Hampshire, none of the paperwork could be done online.

“I certainly understand that they’re a really small department and have limited funds. With the amount of farms that we have, it really just needs to go online,” Phelps said.

He said that the state still certified one Pete and Gerry’s processing plant, which would likely transition over to Pennsylvania Certified Organic.

On Saturday, Putnam held an open house at the farm along Route 10, known as Winsome Farm Organics. He doesn’t know how long it will take to find a buyer.

“Farming in general is very tough,” he said. “I don’t mind working, right? I’ll spend the hours and time and effort. I have no problem with that. But milk prices are going down, and grain prices are going up, and you’re dealing with all these things controlling what you’re doing.”