Global oncology company to deepen its ties to city 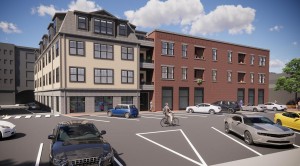 A rendering of the site where Novocure plans to construct its new downtown Portsmouth offices.

Global oncology company Novocure has extended its commitment to Portsmouth with the announcement that it has signed a purchase and sale agreement to buy and construct an office building in the city’s downtown.

The agreement involves a building to be erected at 64 Vaughan Mall. The company said purchase price of the property was $9.5 million, and construction costs are set at $14.5 million. Construction, which will begin next year, is expected to take 12 to 18 months.

Novocure, which located its U.S.-based operations in Portsmouth in 2006, now has more than 300 employees in two buildings on Commerce Way in Portsmouth.

“Novocure’s U.S. roots began in Portsmouth more than 15 years ago,” said William Doyle, Novocure’s executive chairman in a press release. “At the time, we were only beginning, with our cancer therapy just starting to go through clinical trials. We continue to expand as a global oncology company, having grown into a workforce of more than 1,100 employees and having treated more than 21,000 patients with our therapy today. In our culture of innovation, even with all of our growth, we believe we are still only beginning.”

The company, whose world headquarters are on Jersey in the British Isles, said the new space be used for growing its employee base in Portsmouth and housing a training and development center for physicians and others to learn more about its tumor treating fields (TTFields) technology.

TTFields — electric fields designed to disrupt cancer cell division — are intended principally for use with other standard-of-care cancer treatments.