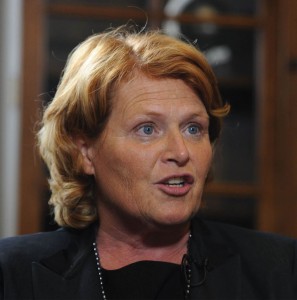 The presidential campaign of Joe Biden used the examples of three small northern New Hampshire businesses to try to cut into President Trump’s support among business owners by pointing out how some of his actions have disrupted the economy.

Biden didn’t remotely attend the virtual campaign event, billed as the “Build Back Better Roundtable,” sandwiched between a campaign ad and a recruiting pitch. It was led by Heidi Heitkamp, the former Democratic senator of North Dakota, a Covid hot spot right now.

The pandemic was certainly on the minds of the participants, especially in light of a new book by Bob Woodward, partly based on taped interviews that Trump privately acknowledged the seriousness of the threat of the virus in February even as he downplayed it in public.

The pandemic caused Karen Liot Hill to shut down her Lebanon Diner on March 15.

The diner, she said, was “out of a movie with black-and-white tiles and metal on the walls and service with a smile,” she said. “The most important thing that a president can do, and I’m talking about President Biden, is to solve this public health crisis.”

Business at the Notchland Inn in Harts Location was down 20% in July and likely the same in the fall, which would normally be booked solid. “But we have nobody from Europe, we have nobody from Australia, nobody from China. The hospitality industry has lost millions because of the poor response in dealing with this pandemic,” said co-owner Ed Butler, a retiring Democratic state representative and chair of the New Hampshire House Commerce Committee.

But the complaints were not just about the pandemic. Butler noted that because of the administration’s immigration policy, he couldn’t get students with J-1 visas, which he had come to rely on, “making our business even harder.”

For Valerie Jensen, an owner of Lupine Inc. a manufacturer of dog collars in Conway that employs 50 it was also trade policy,.

“I would say that your tariff doesn’t work,” Jensen said, when asked what was the one thing she would tell the president. The company lost some $93,000 because of a 25% increase in materials, she said.

“That’s just money coming out of our bottom line,” added co-owner Dave Jensen. “We have to plan our raw materials, but we don’t know what’s going to happen in the next six days. Reducing trade with the other side gets nobody anywhere. We need a president who acts constructively”

Valerie Jensen also said she was concerned about the deterioration of the Postal Service under Trump’s watch, which means that customers have to wait days longer for delivery, “and that is not good for our brand.”

She also expressed disappointment that Trump never fulfilled promises for a major rebuilding of the nation’s infrastructure, which is particularly important to the North Country.