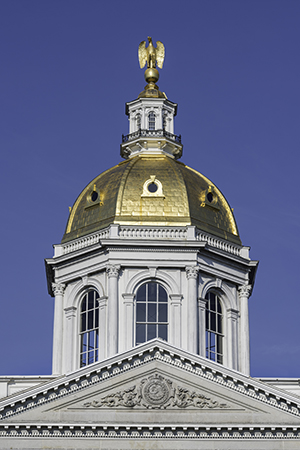 The New Hampshire Senate didn’t pass a bill on Tuesday that would increase unemployment benefits, but it did vote to expand Covid-related eligibility for those benefits as long as the federal government doesn’t balk at the move.

In a session held in Representatives Hall to allow for social distancing, senators also voted to extend unpaid Family and Medical Leave Act requirements to businesses with more than 15 employees for Covid-related reasons. The current threshold is 50.

However, Gov. Chris Sununu is likely to veto the bill, saying in a press release that it would “destroy New Hampshire’s unemployment program.”

The idea behind the amended House Bill 1166 is to maintain some of the pandemic-enhanced unemployment so the state is “not going off the cliff here” when they end, said Senate Majority Leader Dan Feltes, D-Concord.

The federally enhanced benefits include an extra $600 a week, which is due to expire July 31. To soften that blow, the NH Senate bill would increase the state’s weekly benefits by $100 a week. That raise is long overdue, Feltes said, since the state hasn’t instituted an across-the-board increase in unemployment benefits in 18 years and has one of the lowest payouts in the country – a maximum of $427 a week, with a minimum of $32.

The enhanced benefits have “kept businesses going, rent payments coming. Every economist is asking what is going to happen on Aug. 1,” Feltes said. When jobless people get more money “they are not saving it, they are spending it locally and it helps our economy recover.”

But even with the federal government picking up most of the tab, the deluge of claims has been so great that the state’s unemployment trust fund will probably be depleted by the end of the year, doubling taxes paid by businesses. The extra $50 million a month that the would cost would result in the fund running out two months earlier, warned Deputy Employment Security Commissioner Richard Lavers in earlier testimony. If the fund disappears, the state would be forced to borrow from the federal government at a steep price.

“Businesses are going to be hit,” said Morse. “To say this isn’t going to affect our economy is wrong.” The Senate split the bill up and voted on the $100 raise separately. The benefits section failed on a 12-12 vote.

The rest of the bill dealt with eligibility, expanding medical leave, providing protective equipment for workers, waiving testing co-pays for Covid-19 and giving $50 million of federal CARES Act funds to the Department of Employment Security.

Those eligibility expansions are similar to those in Sununu’s emergency order on March 17, which allow self-employed individuals to collect benefits and to allow those who had to stay home from work to take care of themselves or their family from Covid-related reasons – including closed schools and childcare shutdowns – to be eligible for unemployment as well.

But the bill allows someone “to collect benefits or leave employment due to a reasonable risk of exposure or infection.” The Business & Industry Association, in testifying against the bill, objected in particular to that section.

The federal expansion of benefits was temporary. By making them permanent, Deputy Employment Security Richard Lavers said, the state would be out of conformity with federal rules, meaning it could cost the state hundreds of millions of dollars.

In response to such criticism, Feltes added a clause that would make inoperative any part of the law that would throw the state out of conformity,

The bill’s extension of family and medical leave protection to businesses with more than 15 employees for Covid-related reasons also drew opposition.

A worker shouldn’t have to choose between their job and taking care of an elderly family member suffering from the coronavirus, Feltes said.

But, said Morse, “it’s unbelievable that companies under 15 can tolerate this. This would put the nail in the coffin. Who is running our businesses – the people who put up their savings or the people in Concord?”

In other business affecting business, the Senate:

• Passed a bill allowing rural municipalities to band together to establish communication districts to contract for broadband services.