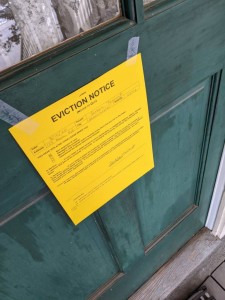 New Hampshire landlords could not start eviction procedures and mortgage holders would have to act in good faith with borrowers under a bill passed Tuesday by the New Hampshire Senate.

House Bill 1247 offers some “baseline protection” protection for tenants and homeowners “so there is not a rush to the court house door” when Gov. Chris Sununu’s emergency order barring evictions and foreclosures ends on July 1, said Sen. Dan Feltes, D-Concord.

The amended version stripped out the original House bill, which would have required extra notice for steep rent increases. It also dropped provisions in Feltes’ original amendment that prohibited rent increases beyond a pro rata share of any property tax and utility increases for six months. Landlords denounced both of those provisions as “rent control.”

The bill that did pass on a 14-10 vote kept his provision that a landlord could not evict tenants for back rent incurred during the state of emergency unless he or she offered the tenant a written six-month payment plan.

The goal is “that all those families crushed by Covid not end up on the street,” Feltes said. “It gives them a chance to negotiate.”

The bill also aims to protect homeowners and other property owners by requiring that mortgage holders act in “good faith and fair dealing” with them. In Feltes’ previous amendment, mortgage holders had to offer a forbearance agreement that must, at the borrower’s request, allow for repayment at the back end of the mortgage and limit the size of monthly payments to the size they were before the pandemic. But bankers objected strenuously.

Community banks already act in good faith, Feltes said, so the bill is aimed at noteholders that rush to foreclose. In New Hampshire, he said, a court order isn’t needed – the mortgage holder simply has to file a foreclosure notice, and it is up to the borrower to go to court to prevent it.

“If we see a wave of foreclosures around New Hampshire after we break for the summer we are going to be kicking ourselves and our constituents will be kicking us as they are getting kicked out of their house,” Feltes said.

The bill also would provide some tenant protections for those who live in rooming houses and allow tenants who are behind in their rent but have no eviction notice (since they weren’t allowed during the state of emergency) to apply to a local welfare office for aid.

Sen. Jeb Bradley, R-Wolfeboro, opposed the bill because he thought it was unfair to landlords, “and I’m concerned about landowners going bankrupt trying to pay their property taxes and their mortgages.”

In a related matter. the Senate stripped its $50 million allocation for a housing fund to help tenants and homeowners and the homeless, which was originally in the amended version of HB 1129, proposed by Sen. Jon Morgan, D-Brentwood. The money would come from state’s $1.25 billion of federal CARES Act funds.

While that bill was being heard Thursday afternoon last week, Governor Sununu announced his intention to spend $35 million of that CARES money on housing.

Morgan praised Sununu’s action and said he would encourage the governor to add another $15 million.