As economy reopens, many of them will have to make a choice 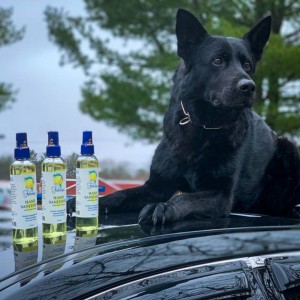 As newly formed supply chains for sanitizer stabilizes and some non-essential businesses reopen, local manufacturers face a choice between making their own products again or keeping up with the demand for sanitizer. Some are choosing to do both.

In April, when Andy Day opened his new nanobrewery Daydreaming Brewing Company inside his Derry distillery, Doire Distilling, he ran out of most of his beer within the first couple of weeks.

Meanwhile, before the planned launch of his brewery, he had already begun making sanitizer to meet demand in the local community.

Demand was high from the start. He was making it for municipalities and local businesses. And for several weeks Day was filling a 140-gallon per week order for Fresenius Medical Care, an organization that supplies about 70 different assisted living facilities in the area.

As a result, he couldn’t find the time to make his own beers or liquors.

Since then, Day said he had to send some customers to Steadfast Spirits Distilling Co. in Concord, and reduced his sanitizer production to about 20 to 25 gallons a week so he could focus on brewing his own beer again and making whiskey wash for distilling.

“I have a hard time saying no to the sanitizer thing, just because I know people are so desperate for it,” Day said.

For smaller distilleries like Doire, it’s a struggle to keep up with the high demand, and nearly impossible to make one’s own products at the same time.

Day also co-owns the Cask & Vine restaurant in Derry, and as restaurants started to open for outdoor seating this past week, Day needed to make sure he had his own drinks on hand to sell.

Brian Ferguson, owner of Flag Hill Distillery and Winery in Lee, said he’s faced with a similar dilemma now. When they first started making sanitizer, like many other distilleries in the state, it was a way to keep the lights on and keep paying employees while helping local municipalities and first responders.

“We built a fairly complex supply chain really in the matter of a few days,” Ferguson said.

A cottage sanitizer industry was built from scratch and at breakneck speed. Distillers shared missing ingredients with each other, bounced clients back and forth, and worked out ways to donate sanitizer to first responders.

As soon as Ferguson completed his first donated order for local fire and police departments, via Matt Mayberry, a Republican candidate for Congress, another order three times bigger came in.

The phones rang off the hook in the initial days, after a local news report about the company’s efforts to make sanitizer. He got calls from hospitals, ventilator manufacturers and even the United Nations, looking to export sanitizer.

“It went from this little thing to help out our neighbors –

it got very serious in a hurry,” Ferguson said.

At peak, he was producing about 2,000 gallons a week. Ferguson said he slept by the still and set alarms for himself for about three weeks in a row.

“The biggest challenge is that the sanitizer, the industry that sprung up around this hand sanitizer, it changes so rapidly,” Ferguson said.

The demand has been unpredictable, with large and urgent orders coming just when things appear to be slowing down, he said. That’s made it difficult to work in time to produce the company’s own products.

“We try to get back to some piece of normalcy for running our normal production schedule and then we hit a snag and we’re all hands on deck for sanitizer again,” he said.

Early on, Ferguson made a rye mash, the fermented and pre-distilled liquid used to make rye whiskey. Normally, he would wait about three days before running it through the still. It’s been over 30 days and he still hasn’t run it.

The whiskey will have a different character as a result of the delay, so Ferguson plans to barrel and label it differently.

So far, he is mostly breaking even on sanitizer sales and the focus on sanitizer has put them way behind on their spirits production schedule, though Ferguson said it’s possible to catch up. Still, the time may come when he has to make a choice.

“That moment will come. There will come a moment where it will be choosing between no spirit on the shelves and no sanitizer,” he said.

For now, he’s taking it day by day. And he still has some aged spirits coming out soon, such as a 13-year-old Kayuga Brandy. He may also bottle what was originally going to be a 10-year-old single malt early, making it six or seven years old, because it’s going to be ready ahead of schedule.

Meanwhile, for companies like Fabrizia Spirits in Salem and Evolve Salon Systems in Manchester and Derry, making sanitizer is becoming a permanent addition to their repertoire.

While smaller distillers are making the alcohol from scratch, either with whatever ingredients they have on hand or inexpensive corn syrup, Fabrizia buys premade ethanol for its liqueurs and canned cocktails, saving them a lot of time, according to co-owner Phil Mastroianni.

They also operate at a scale that enables them to sell their products in 16 states nationwide, so pivoting to large-scale sanitizer production was possible. That’s not to say it was easy though.

“We sort of had to create a hand sanitizer line,” Mastroianni said.

His brother and co-owner Nick assembled the new line by pulling down an old filler that was collecting dust on a rack, and buying about $20,000 of new equipment such as another filler, a conveyor belt, heat tunnel and labeler.

“We really Mickey-Moused this thing together,” he said.

For the first month they were making sanitizer exclusively. Now they’re back at full production of their limoncello and canned cocktails.

They found plenty of buyers as well. They’ve sold their lemon-scented sanitizer to 80 Market Basket stores and the distributor for Roche Bros. Supermarkets in Massachusetts. Their biggest customer, where about 35 percent of their product is going now, has been a chain of about 70 7-Eleven stores in New England.

The sanitizer sales have made up for what Fabrizia lost in beverage sales so far, Mastroianni said. Continuing to make both will put them up in overall sales over last year.

Still, Mastroianni said the company prides itself on keeping their prices among the lowest in the market right now. He said an 8-ounce bottle will sell wholesale for $3.25 so it can retail for under $7, even though he said there were companies who would have paid 10 times as much.

Like distillers, Fabrizia is making sanitizer under temporarily altered guidelines from federal regulators. Mastroianni said he hired a consultant to help him navigate the U.S. Food and Drug Administration regulations, and he plans to submit his product for a six-month stability test so the company can get a long-term FDA certification.

Eventually, he would like to make a gel form of sanitizer, which is not currently allowed under the temporary guidelines.

Salon product manufacturer Evolve Salon Systems has also been making large quantities of sanitizer, and owner Dick Anagnost says they already have the necessary FDA certifications to make it a permanent part of their product lines.

Anagnost said the sanitizer uses a lot of the same ingredients they already use, including isopropyl alcohol, though not in the same proportions. They were able to use their existing suppliers to keep up with the demand.

“The bottling labeling and filling is the same for hand sanitizer as it is for hair products,” Anagnost said.

They initially made 150 gallons and donated it to the Manchester Police and Fire departments.

“Then, when we determined it was a good product, we put it out to the rest of our network and it took off because nobody had any,” Anagnost said.

Since then, they invested about $250,000 in new equipment, added a fourth line and started using one of them for hair products again. Anagnost said the company is making about 5,000 gallons of sanitizer a week on average.

The sanitizer sales initially made up for about 20 to 25 percent of their lost salon product sales. As salons and barbershops start to slowly ramp up their businesses, Anagnost expects sanitizer sales will continue to be an important way to keep the business in the black.

Anagnost said Evolve sells its products to about 5,000 salons nationwide, but he doesn’t expect business to go back to the way it was.

“We’re hoping (the sanitizer is) going to replace whatever percentage we’re going to lose from permanent closures and the lasting effects of Covid,” he said.

So far, they are retailing 8-ounce bottles for $10, or $50 for a gallon, and the prices go down if they’re sold in bulk.

Investing in a new line seemed like a gamble at first, but Anagnost said they’ve gotten large orders for up to 100,000 units, and nine new customers have signed one-year contracts for bimonthly shipments.

He said his team deserves a lot of credit for developing a new product line in such a short time.

“We developed this product line eight weeks on the run while making sales and manufacturing at the same time,” Anagnost said.

Moving forward, they will have six sanitizer products, including sprays and lotions. Their best-selling sanitizer is made with CBD, Anagnost said.

Down the road, Anagnost expects demand for sanitizer will go down after a vaccine for Covid-19 is developed, but even then he doesn’t think it will disappear. He said the market will have changed as people develop new hygiene habits in the wake of the pandemic.