As organizations mobilize across the state, they’re unsure what to expect 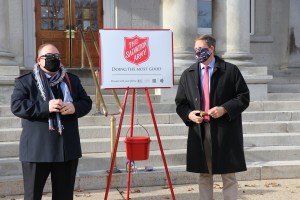 As Jeremiah and Kathryn Eisley fight to keep their red kettles out this year, Covid-19 is fighting back.

The Eisleys, who run the local Salvation Army in Rochester, NH, are determined to keep this year’s red kettle campaign — long an icon of holiday giving — alive during the pandemic.

They came prepared: the Salvation Army established guidelines to keep volunteers and donors safe, as well as options for contactless giving.

But the virus means people are more reluctant to volunteer this year, and with more shops closed, real estate is limited. While the Rochester location typically aims for 15 red kettles each holiday season, they can now only staff two to four at a time. And with less foot traffic — and perhaps more wary donors — funds are lagging.

The Eisleys are not alone. On Dec. 7, The Salvation Army’s Northern New England Division, which serves New Hampshire, Vermont and Maine, announced it was 66% behind on its fundraising goal compared to last year. Meanwhile, demand for the nonprofit’s services has jumped dramatically — in some places, by over 150%.

“These are folks that are seeking out help for Christmas for the first time ever,” Jeremiah Eisley said. “And in a few cases — I can count a few on both my hands — some of these folks have been longtime givers themselves.”

The Salvation Army is not alone, either. November and December mark some of the busiest months of the year for nonprofits, often host to important fundraising events and annual appeals. About a third of all charitable giving each year happens during the holidays, and New Hampshire is no exception, Kathleen Reardon, CEO of the NH Center for Nonprofits, said.

As nonprofits across the state mobilize to make the most of end-of-year fundraising, they’re unsure what to expect. For one, national trends suggest people may be donating more during this year. The nonprofit sector saw an uptick in charitable giving this spring, as individuals stepped up to help their communities through the first few months of lockdown, Reardon said.

But while communities may very well match this generosity this holiday season, it’s uncertain whether it will be enough to meet the enormous need created by the virus and the economic fallout that has followed it.

With in-person events practically impossible, nonprofits have embraced contactless ways to engage their donors this year, relying on email, postal mail and social media campaigns to get the word out. To make giving easier, many have added donation forms to their website or even enlisted text-to-donate services.

Granite United Way, a branch of United Way serving New Hampshire and Windsor County, Vermont, is one of them. This year, it’s engaged the majority of its 22,000 donors and volunteers through emails, text messages and phone calls, president and CEO Patrick Tufts said.

It would seem the new strategy worked: The organization is on track to meet its fundraising goal of $10 million — a finish line slightly shy of last year’s $10.3 million, Tufts said.

And while such methods have become fundraising staples during the pandemic, special events are not off-the-table this year, either. By now, many organizations have overcome the often-steep learning curve that comes with hosting events virtually and have reinvented their fundraisers for online spaces, including concerts, galas, trivia nights and walk-a-thons.

According to Reardon, response has been varied: some virtual events rival or surpass the success of their predecessors, others struggle to draw an audience.

The Center for the Arts Lake Sunapee Region, for example, recently hosted an online art auction for its education fund, which supports arts programming through school and teacher grants. The event, which spanned mid-November to Dec. 6, allowed patrons to bid on dozens of items, including paintings, classes and entertainment.

Board chair Jean Connolly said the auction pulled in a third to one-half of what the center’s fall fundraiser usually makes. This year’s spring fundraiser, which supports its scholarship program, also struggled to raise money, she added.

“Things are kind of suspended this year,” Connolly said. “So we’re holding our breath that by next year, we’ll be back on track.”

‘It’s going to be scary’

Reardon said it’s important to consider how the pandemic is affecting nonprofits differently.

For one, in times of economic hardship, nonprofits that don’t provide for basic needs—like arts and culture organizations—have historically seen the biggest dips in donations, she said.

“We’re a $12 million organization, we have 70 staff across the state, and this is hard for us,” he said. “So I can’t imagine being a small one, two or three-staff, quarter-of-a-million-dollar budget nonprofit. It’s going to be scary.”

Nonprofits that find the need in their communities exceeds what their services are able to provide may be forced to extend fundraising into next year, or to simply roll back their programs.

As nonprofits look toward the new year, many are preparing for demand to increase further as federal and state relief subsides — as well as housing insecurity to spike when the federal eviction moratorium ends in January.

In addition to donating and volunteering, Reardon said she encourages others to support their local nonprofits by learning more about what organizations are in their area and sharing information about them with family and friends, or on social media. Likewise, communities can help support nonprofits by allowing them to use public space for free, or by promoting them at community events, she said.

“Giving feels good,” Reardon said. “It’s a way that people can be part of something bigger than themselves, and it’s wonderful to know that you’re part of a community.”