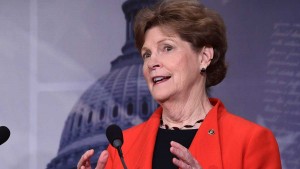 U.S. Sen. Jeanne Shaheen, D-NH, says she plans to introduce legislation that would be aimed at helping businesses with fewer than 100 employers.

With a deadline of midnight Friday to apply for New Hampshire’s Main Street Relief Fund for small businesses, U.S. Sen. Jeanne Shaheen said she plans to sponsor a bill to give even smaller struggling businesses a second chance to apply for federal Paycheck Protection Program assistance.

The $659 billion PPP program, which offered one-time forgivable loans to business with fewer than 500 workers has stalled for about a month, partly because of shifting rules on whether the loans would actually be forgiven.

Treasury Secretary Steven Mnuchin said on Wednesday that businesses returned a total of about $12 billion of PPP funds in May because of the uncertainty. On June 4, Congress voted to relax those forgiveness rules considerably. Under the revised rules, businesses only need to spend 60% on payroll, as opposed to 75%, they have 24 weeks to do it rather than eight and they have five years to pay back the unforgiven portion, not two.

But there were concerns that the legislation might mean that there would be no forgiveness at all if a business just misses the 60% target, especially since the Small Business Administration, which guarantees the loans, has yet to promulgate regulations.

Rachael Roderick, acting director of the SBA in New Hampshire, assured businesses on Wednesday in a Business and Industry Association webinar that this would be fixed, and business would be forgiven whatever they spend on payroll.

Shaheen, who helped negotiate the original PPP provisions, said on Wednesday that she and two other Democratic senators plan to introduce the Prioritized Paycheck Protection Program (P4) Act. It would be aimed at businesses with fewer than 100 employers, including sole proprietors and self-employed individuals, who have used up or are about to use up their initial PPP loan, and they “must demonstrate” a revenue loss of 50% or more due to the pandemic. The last condition is more specific than the one in original PPP, which contained some vague language about being affected by the pandemic.

The loans would cover another eight weeks of payroll, capped at $2 million. About 20% of the fund, or at least $25 billion, would be set aside for those with either 10 or fewer employees or are businesses in rural communities and the SBA would have to ask for demographic information so the business would be eligible.

Shaheen mentioned her proposal when questioning Mnuchin Wednesday at a hearing of the Senate Small Business and Entrepreneurship Committee, stressing that many businesses, particularly in the hospitality industry, “are about to run out of money and are worried that they are going under in the next couple of weeks.”

Mnuchin agreed that “small businesses are going to need more help” but did not commit to supporting more PPP funding, arguing that the department was open to other programs as well including tax credits and mentioning that large businesses needed help as well.

Shaheen also questioned SBA Administrator Jovita Carranza about the Emergency Injury Disaster Loan program, which provides long-term, low-interest loans with a small grant component. The SBA was so overwhelmed by applications that it couldn’t process many of the loans, much less answer the deluge of calls and the program was shut down to all but farmers as it attempted to go though the backlog.

Carranza said the agency has since added workers to tis phone center and increased the efficiency of the loan officers. She also said that the agency might soon be able to take new applications.

But as of Thursday, the SBA website the agency website still stated “at this time, only agricultural business applications will be accepted due to limitations in funding availability.

But that availability might already be exhausted. Congress allocated $77 billion for two rounds of EIDL funds, but according to the latest reports, the agency approved nearly $80 billion loans as of June 6 and $10 billion in grants as of May 8.

Meanwhile the state’s $400 million Main Street Relief Fund is the largest allocation of the $1.25 billion the New Hampshire receive in flexible CARES Act funds. The program is designed to help cover the losses of businesses with less than $20 million in revenue who could not get any or enough relief from federal programs.

Applications are due on midnight Friday, but only the 13,000 businesses that submitted a pre-application are  eligible to apply. As of Thursday morning, some 7,000 of those businesses submitted final applications.

The grants, capped at $350,000, would be the difference between the last year’s gross revenues and expected revenues this year, minus half of any PPP assistance received and minus all of other federal assistance, including EIDL.

But the state Department of Revenue Administration won’t determine the final size of grants until it receives all the applications.

The governor also set aside $30 million for a “gap fund” administered by the Business Finance Authority to try to fill any unmet needs of New Hampshire businesses, but the details of that program won’t be worked out until Main Street Fund runs its course.