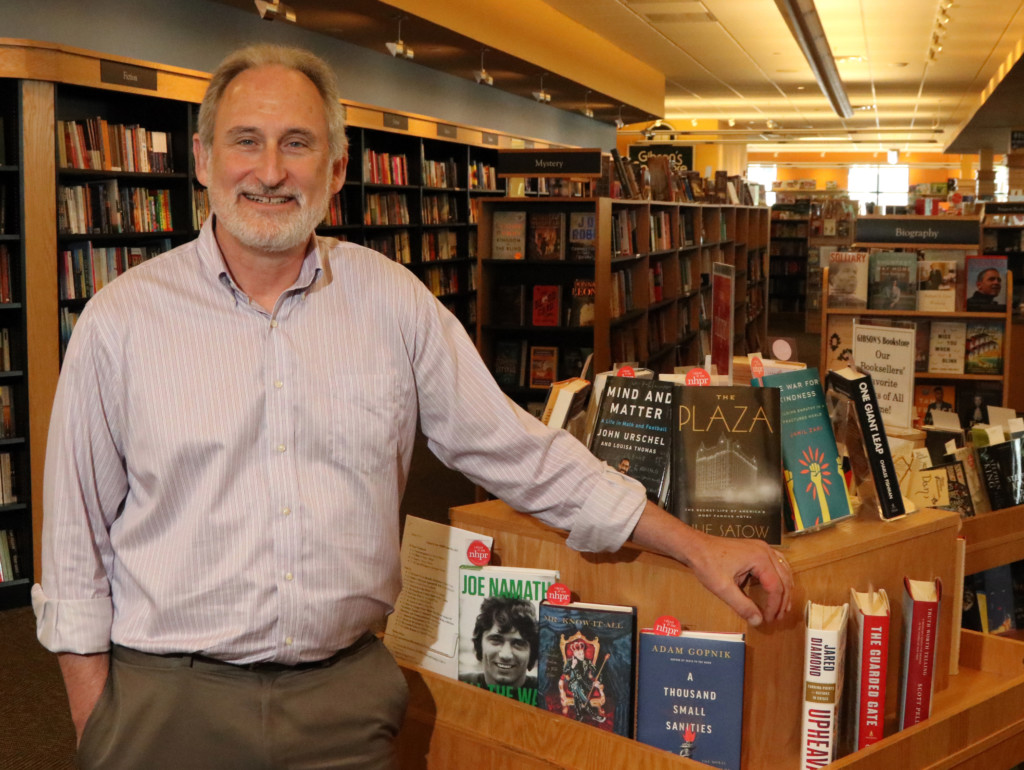 “Every time there is a new innovation, they predict the death of the book,” said Michael Hermann, the owner of Gibson’s Bookstore in Concord. “But the book is a perfect technology. Like the shark, it hasn’t changed and continues to thrive.”

In fact, the resilience of the printed book, paired with the business savvy of booksellers, have enabled independent bookstores to weather the storms brought by big-box retailers and the digital revolution and stage a resurgence that has restored and enhanced their place in downtown retailing across the country and the state.

The American Booksellers Association reported that the number of independent bookstores peaked in 1995, the year Amazon was launched, only to plummet by 43% over the next five years. Meanwhile, between 1995 and 2009, sales at independent stores fell 40%. And the federal Bureau of Labor Statistics reported between 2004 and 2018 the number of people reading for pleasure dropped by 30%. When Amazon introduced the Kindle in 2007, futurists foresaw the passing of the printed book itself and analysts rang the death knell for independent booksellers.

But during the past decade the number of independent bookstores has climbed by nearly 50%, from 1,651 to 2,470. New stores have opened. Old stores have expanded. Others have changed hands. Sales have grown at a compound annual rate of 5.4%. And while print book sales rose almost 11% between 2013 and 2017 and jumped by $50 million between 2017 and 2018 to nearly $700 million, e-book sales are flagging and falling.

Toadstool Books, the largest independent store in the state, first opened in Peterborough in 1972 and moved to the empty A&P in 1992, more than quadrupling its space. Stores in Keene and Milford were added in 1983 and 1989. Owner Willard Williams recalled that his first competitors — B. Dalton’s and Waldenbooks — appeared in the 1980s. Operating in shopping centers and strip malls, he said, both drew customers who otherwise might not enter a bookstore, which for some carried an elitist flavor. “It wasn’t so scary to walk into a bookstore anymore,” he said. “They became more welcoming, more comfortable.”

Williams said competition stiffened when Borders gained a presence in Keene through its acquisition of Waldenbooks in 1987. Unlike the smaller chains, he said that the megastores — Borders and Barnes & Noble — carried a diverse stock akin to that of independent bookstores, but with wider range and greater quantity. “Borders had a real impact,” he said.

However, as the digital revolution gathered pace, the impact of Amazon rattled booksellers large and small.

Borders, with 1,246 locations bearing the Borders and Waldenbooks names at its peak, failed to invest in online sales and began losing money in 2006, declaring bankruptcy five years later.

Unlike Borders, Barnes & Noble remains, but not without being crippled by Amazon. 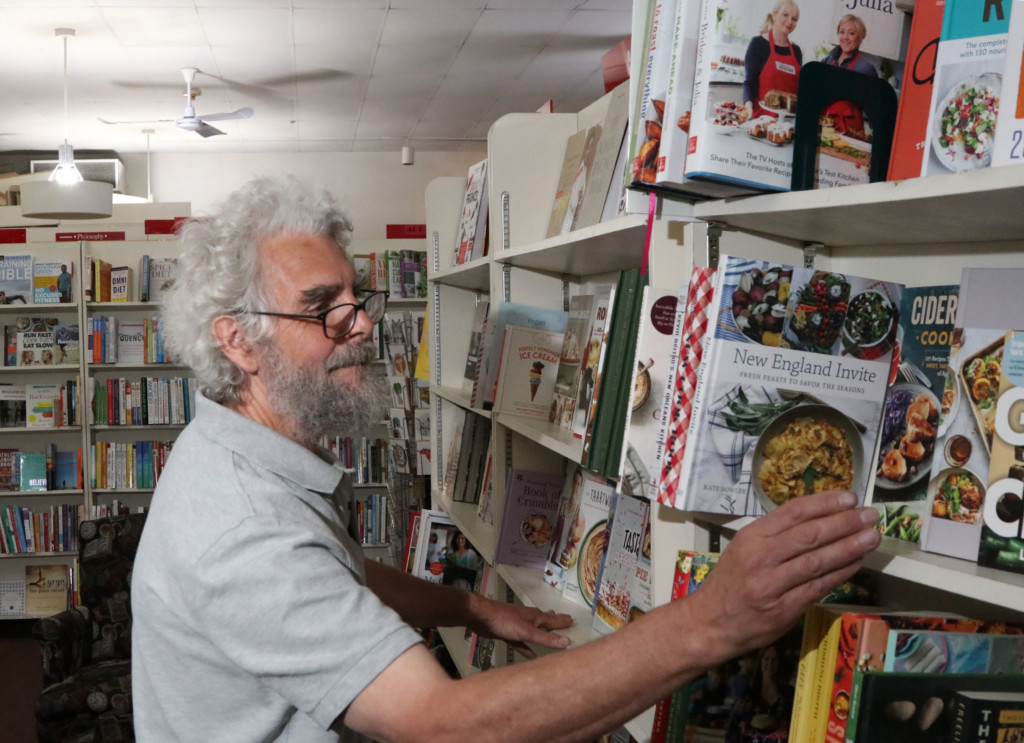 Willard Williams, owner of Toadstool Bookshop of Peterborough, Keene and Milford, at the Peterborough location. (Photo by Allegra Boverman)

Between 2008 and 2018, the company closed some 150 stores, among them the venerable Dartmouth Bookstore in Hanover, which the company began managing in 2004 and then acquired in 2009. The Valley News reported the store was losing on average $250,000 a year when it closed last September, shortly after Wheelock Books, the town’s only other bookseller, also closed after 26 years in business.

But, signaling the resurgence of independent booksellers, Allie Levy, a Dartmouth graduate, announced in February that she intends to open a bookstore, offering books together with beer and wine, in space left by the Dartmouth Bookstore. She said that the store would occupy 3,000 square feet on the ground floor of the building.

Hermann purchased Gibson’s in 1994, the year before Amazon entered the book market. Five years later, Borders opened a large store in Fort Eddy Plaza in Concord. In 1998, when Gibson’s marked its 100th anniversary, Hermann responded to Amazon and girded for Borders by more than doubling the size of the store to 3,800 square feet.

In 2006, the demolition of the Sears block and construction of the Red River Theatres movie venue next door led to a street closure and lost parking spaces. Next came the Great Recession.

Laura Cummings of the White Birch Bookstore in North Conway said that she bought the store, where she was an employee, in 2005 when Borders and Amazon were overshadowing the business. “I thought, ‘What have I done?’” she said. “We had to get a little creative, to be nimble.” She said business has steadily improved since Borders, which operated among the outlets nearby, closed.

In Meredith, Casey Gerken acquired the Innisfree Bookstore, where she had worked since 2008, in 2017. She said that because the store had weathered what she called “the perfect storm” and was on a sound footing, her foray into the business has been “much less scary.” She said she has invested to improve the efficiency of operations, re-freshen the layout and ambience of the store and expand the use of social media. 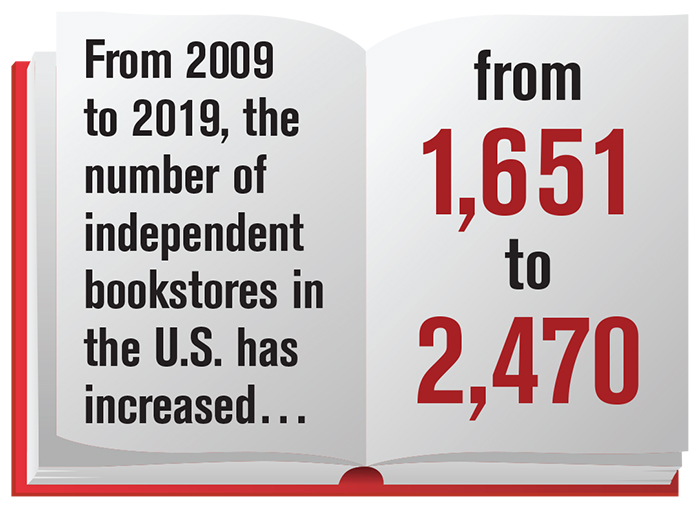 Although Barnes & Noble continues to operate in Manchester, Nashua, Newington and Salem, and Books-A-Million acquired Borders stores in Concord, North Conway and West Lebanon, independent booksellers say Amazon has the greatest impact on their sales. The retail behemoth sells four of every 10 books sold in the country and three of every four sold online at discounted prices.

Civic Economics, an analytical and consulting firm with offices in Chicago and Austin, in a report entitled, “Amazon and American Communities,” calculated that the company’s total sales in New Hampshire swelled from $362 million to $647 million between 2014 and 2016, displacing 214 retail outlets, 1.8 million square feet of retail space and 3,094 retail jobs.

Despite the overwhelming presence of Amazon, independent booksellers have mounted a recovery in its shadow.

“Amazon came at us first,” Hermann said, explaining that Amazon led by selling books, at discounted prices because they are standard in size, easy to ship and carried bar codes. “We adapted and now they are coming at everyone else.”

Independent booksellers differentiated themselves from their competitors by leveraging their physical presence in their communities to draw people together around their shared interests in reading and books, much like a music store is a hangout for musicians.

“Amazon is the internet bookstore,” Hermann remarked. “If you want to live in the real world, you shop at an independent brick-and-mortar bookstore.”

Dan Chartrand, who opened the Water Street Bookstore in Exeter in 1991, after a decade in bookselling and publishing, said “it’s not about selling product, but about the quality of relationships and interactions. Books are an excuse to engage with other readers and authors.” 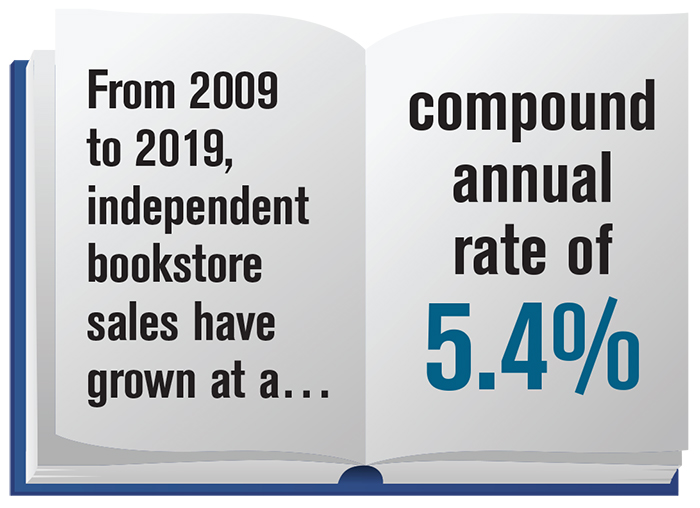 He said that, some years ago, he told his staff to “stop focusing on selling stuff” and develop a new mission. Their statement reads: “To build a diverse and vibrant community around the written word.”

Independent booksellers have established a collective identity by stepping to the forefront of ‘buy local’ initiatives, aligning their business interests with civic initiatives. “We have to keep saying it,” said Cummings. “There are few powers left to us, but spending our money locally is one, and we know it stays in our community.”

Williams said The Local Crowd (TLC) Monadnock, a consortium of economic development organizations, has provided significant support for small businesses in the region. “The ‘buy local’ movement has been huge,” echoed Hermann.

Clare Brooks said since she opened The Little Village Toy & Book Shop in 2014, following the closure of The Village Bookstore, which stood as a centerpiece of Littleton’s Main Street for four decades, support from “the community has been a large part of our success. People here are willing to pay a little more to save their Main Street,” she said.

Bookstores offer venues for a variety of events, from book signings by well-known authors to story times for local children while hosting and supporting reading and discussion groups. Gibson’s has drawn crowds by offering a stump for presidential candidates, more and more of whom have published their life stories to boost their campaigns. Bookstores have incorporated cafes, generally serving coffee, pastries and light fare.

The Bookery in Manchester, the state’s newest store, has gone a step further, offering soup and sandwiches topped off with beer and wine. And in May, for example, it hosted a book group, poetry workshop, knitting club, author visits, story times and live music.

The character of stores is reflected by the books on the shelves. While Amazon treats books as commodities, independent booksellers appreciate that no two books are alike. They speak of “curating,” an intuitive process of selecting books they have enjoyed, which they think will appeal to their customers, to enrich the stock of best sellers and recent releases with the lesser known work of promising writers to lend each store its distinctive character. 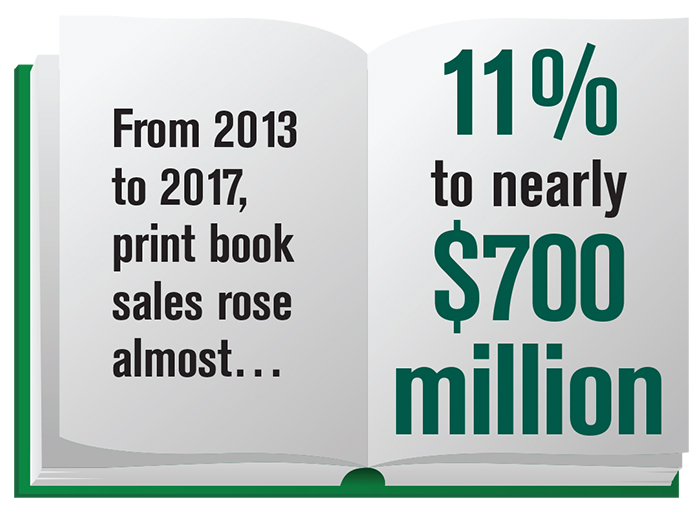 “We’re zigging while everyone else is zagging,” said Chartrand.

And booksellers are fellow readers. “We don’t have cashiers, we have booksellers,” Hermann said. Booksellers are expected not only to fetch a book from the shelves, but to recommend authors and titles matching the tastes and preferences expressed by customers.

“They have to be good at books, but also good at retail,” Cummings said, recalling one young woman who she often reminded not to tell customers ‘I only read the classics.’” In the trade, they speak of “hand-selling” as a hallmark of an independent bookstore. And “Staff Picks,” books read, reviewed and recommended by employees, feature in most stores and represent an important share of sales.

The American Booksellers Association has promoted and supported the collective “indie” identity, which has fostered cooperative rather competitive relationships among booksellers. “We are colleagues, not competitors,” Hermann said.

Among the 20 some independent bookstores in New Hampshire, 14 are members of the New England Booksellers Association. They speak often and meet from time to time, and may even refer customers to one another.

And, by hanging together, they are not hanging singly but growing in number, signaling as Williams remarked, “a town that supports a bookstore must be a good place to live.”