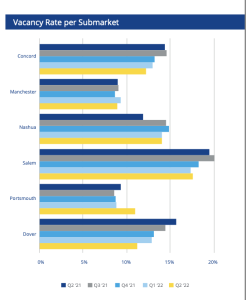 The vacancy rate was almost unchanged compared to last year. However, compared to the second quarter of 2019 (pre-pandemic), the vacancy rate went up by 4.0 percent. This steep incline was due to some companies downsizing their office space, notably in the Class B sector.

Looking at areas with the largest increases, the Concord and Portsmouth submarkets climbed by 6.6 percent each compared to the second quarter of 2019. Overall this shift can be attributed to large companies downsizing over the past couple of years. However, in Portsmouth it was also due to new construction.

This construction partially led to the 2.9 percent rise in the vacancy rate in the Class A sector. The Portsmouth submarket also had large vacancies in existing buildings hit the market, markedly around Pease Tradeport. However, 145 Maplewood Avenue in downtown Portsmouth was completed in 2021 and is still roughly 42.5 percent vacant.

Even with the direction of the Class A vacancy rate, rents are climbing year-over-year with a significant spike compared to pre-pandemic levels. Compared to 2021, the sector’s rent shifted from $23.49 to $24.89 modified gross, a 5.9 percent increase. Looking back to 2019, the rental rate increased by more than double. Typically if the vacancy rate rises, rents fall – simple supply and demand. However, since the vacancy rate rapidly grew, rents have not had a chance to follow the traditional direction.

Rents in the Class B sector have followed the same path. Compared to last year, rents rose by 3.7 percent and ended the second quarter at $18.92 modified gross. In comparison to pre-pandemic rate of 2019, the rental rate increased by 14.8 percent

The same can be said about the vacancy rate in Class B sector, which had the most significant increase of all the sectors, jumping by 5.3 percent since the second quarter of 2019. While there was no new Class B construction, almost every submarket had more than 100,000 SF hit the market over the past three years, except our smaller submarkets – Dover and Salem. These changes were due to companies either leaving the submarket or consolidating locations. For example:

In the Concord submarket, over 200,000 square feet was added when Lincoln Financial Group and Cigna vacated their New Hampshire locations

In the Portsmouth submarket, while there were no large blocks added, there were roughly eight 10,000-square-foot blocks added in different building by various companies vacating space

What does this mean for the market and what direction is it headed?

Last quarter, we talked about how the conversion of office to multifamily could cause the vacancy rate to drop. So far this shift removed only a small amount of vacancy and inventory. Yet the shift in the vacancy rate has leveled out for the past three quarters.

This means there is just as much space being leased as vacant space hitting the market over the last few quarters. This is a healthy direction for the market.

The long-term outlook is still unknown. Many of the larger companies have made decisions about whether to stay in their space, change their footprint, or close offices altogether. Although we could see some more impactful changes. Typically, lease terms can range from three to 10 years. It may be another couple of years before the market sees the final impact the pandemic as companies make decisions about lease renewals.

Kristie Russell is Colliers’ research manager for New Hampshire and Maine. This article is excerpted from the firm’s second-quarter 2022 New Hampshire Office Report.