Some require coverings, others avoid mandate 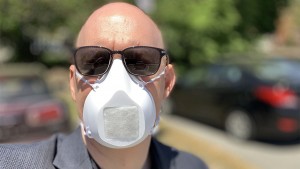 With summer drawing near, towns and cities throughout New Hampshire have begun discussing and enacting face mask ordinances. As a result, lawmakers are grappling with the health implications, enforcement tactics and likely public reactions to mandated face coverings, while at least one New Hampshire town is being sued in response to its mandate.

Nashua, the state’s second-most populated municipality, enacted a city-wide face covering ordinance on, May 21 after a vote by the Board of Aldermen.

On May 27, the city was sued by a Nashua resident represented by Fojo Law over the ordinance. The lawsuit claims that Nashua city administrators “lacked the statutory authority to enact such an ordinance,” and alleges that the measure violates the constitutional rights of Nashua residents. The same lawsuit challenges Gov. Chris Sununu’s emergency declaration and subsequent restrictions.

Nashua’s ordinance requires all business employees to wear a face covering “when interacting with the public and whenever they are within six feet of a co-worker or a customer.” Additionally, all members of the public entering businesses (including ones with outdoor operations), worksites or government buildings must wear a face or covering “made of cloth, fabric, or other soft or permeable material, without holes, that covers only the nose, mouth, and surrounding areas of the lower face.”

In addition, people entering a restaurant to pick up takeout or other purposes must wear a face covering, but those dining outdoors are allowed to remove the face covering while seated.

The ordinance also states that masks need to be worn when entering and while within “common areas and communal spaces” of a residential or commercial complex greater than two units.

Violators of Nashua’s ordinance could be subject to a fine of up to $1,000.

Nashua Alderwoman Elizabeth Lu initially found herself hesitant to vote for the ordinance, worried that residents would feel it infringes on their rights. However, she ultimately came around to the measure because face coverings are meant to protect people from the spread of infection

In Durham, a face covering request was ordered on May 28. It “requests all residents, visitors, business employees, and passersby within the jurisdictional boundaries of the municipality to wear cloth face coverings when outside of the home to help slow the spread of Covid-19.”

Durham Town Administrator Todd Selig is adamant that the practice of wearing a face mask or covering is for the greater good after speaking with the state Department of Health and Human Services.

“Life in Durham is no more dangerous than life in Manchester, Nashua, Lebanon, Salem, Littleton, or Concord — we must all be equally vigilant to remain healthy with the virus present in society,” he said. “Proactive mask wearing is essential in Durham’s downtown, on campus, at the grocery store, and anytime we are out and about amongst other people in New Hampshire.”

He added that Durham municipal facilities “have signage in place requesting voluntary face coverings, and masks are available that have been individually bagged for sanitary purposes.”

On June 1, Portsmouth Assistant Mayor Jim Splaine proposed during a Zoom city council meeting that the city issue a statement that it “respectfully advises” residents and guests to wear a face mask when social distancing measures cannot be maintained indoors and outdoors. The motion also proposes that Portsmouth businesses “respectfully urge” residents and guests wear face masks upon entering their respective locations.

Splaine, who had previously expressed support for a face mask mandate, revised his stance after speaking with Portsmouth Mayor Rick Becksted, city residents and after observing social media reactions to the topic, he said.

“I think all of us want to be able to see us return to normal, whatever that new normal for a while is going to be,” he said. “One of the ways to do that is to make sure that we do not see numbers go up now that we are doing something different, and that is getting together again.”

Mayor Becksted cited concern that the motion became a step closer to a mandate and that people would test the boundaries of it. He argued that the city’s Market Square matrix board message saying “the mask is all we ask” was enough to inspire residents and visitors to take proper precautions.

Becksted worried that people challenging any request to wear masks might begin a confrontation and potentially get the police involved, and that visitors might come into the city to attempt testing those boundaries and risk the spread of infection.

“I don’t think we should be putting our city at risk,” he said.

Portsmouth City Manager Karen Conard said the city has been successful in its outreach asking residents to take proper precautions. Right now advising residents to wear masks, but not mandating it, is enough, she said.

“We don’t want to mandate because the data and science don’t warrant that we mandate policy around it,” she said.

In Salem, a face mask ordinance was proposed on May 11 but never voted on. Selectman Jim Keller wanted the town to consider the measure because of its proximity to Massachusetts and the area’s large elderly population. Selectmen listened to public opinion, but the measure – which would have fined people $200 for not wearing masks – did not gain any support from other board members.

This articles is being shared by partners in The Granite State News Collaborative. For more information visit collaborativenh.org.