Across the state, they adjust shifts, work areas and product emphasis 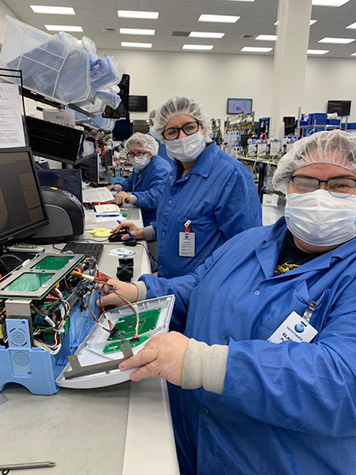 All workers don protective gear on the manufacturing floor of Vapotherm in Exeter.

Question: Which of the following New Hampshire manufacturers will be allowed to remain open under Gov. Chris Sununu’s March 26 order to close non-essential businesses?

Answer: All of the above.

On March 26, Sununu said he had to make “tough decisions” and announced that, by the weekend, the state would be requiring New Hampshire residents to stay at home and close nonessential businesses to stop the spread of the coronavirus, which has been gaining momentum since first being diagnosed in the state at the beginning of March.

But shortly after issuing the order, the governor released a list – called Exhibit A to Emergency Order #17 – of essential businesses exempted from that order.

“The vast majority of manufacturers are considered essential,” said Sununu later to WMUR-TV in answer to a interviewer’s question.

Other parts of the order exempt manufacturers of packaging materials, containers, pesticide, forest products, tissues, paper towels and anything related to the military.

But Sununu called the list “a living document,” meaning that any manufacturers (as well as other businesses) that don’t fit into the categories, could send an email to essential@nheconomy.com to see if they could be exempt too.

“It is a pretty broad list,” said Jim Roche, president of the state’s Business and Industry Association, of the 3,000-word Exhibit A. “But we would have preferred that he had exempted all manufacturing. We don’t think government officials should pick and choose what is essential.”

Many individual manufacturers echo that sentiment. Closing down a manufacturer in one market could disrupt the supply chain of others, similar to how wiping out one species can harm the food chain and damage the ecological system.

“Most everything is made out of what someone else makes,” said David Worthen, president of Worthen Industries in Nashua. “And you can’t do anything in this economy without making stuff.”

While management and office staff of manufacturing companies can work from home, production workers can’t. The very process of manufacturing requires them to work closely together in the same building, making it extremely difficult to follow recommended social distancing guidelines.

Employers are forced to take proactive actions to keep them safe – deep and frequent cleanings, providing protective equipment, changing shifts to keep people apart, taking employees’ temperature at the door, or sending someone home with the least cough or sniffle.

“My great nightmare is someone feels they have to come to work and they spread it though the building,” said David Greer, CEO of Wire Belt Company.

That possibility came a little closer to reality at Monadnock Paper Mills in Bennington after an external salesperson tested positive for Covid-19. But the plant continued “to operate without disruption” and took precautionary measures, such as limiting business travel, using hand sanitizer and restricting visitors, according to a press release issued by the company, which declined to be interviewed.

The very interconnectedness of manufacturing presents other difficulties.

As the economy suffers and other states and nations impose stricter measures, the results are supply chain disruptions and order cancellations.

On Friday March 20 – a lifetime ago in this rapidly unfolding medical and economic crisis – manufacturers reported that supply chain was their greatest problem, according to a survey by the New Hampshire Manufacturing Extension Partnership. But there are also shipping disruptions and rushed orders. Yet they also have to be accommodating to workers who suddenly need to take time off or change their schedule to take care of kids sent home from school.

Despite this, nearly 100 New Hampshire companies have responded to state’s request for protective equipment and medical supplies. The state has set up a portal for businesses that want to help.

Here is a look of what some are up against in this crisis.

Vapotherm makes high-velocity respirators, freeing up the heavy-duty kinds used to treat the most severe coronavirus patients. The shoe box device, usually hung on an IV pole, has been in great demand in Europe and now in the United States. So the company has hired 50 people in the last few months, doubling its manufacturing staff, to quadruple production. But the building is only so big.

“We are confined by our walls,” said Lindsay Becker, vice president of human resources. “So we can’t maintain six feet of separation, probably around three feet. We are certainly not shoulder-to-shoulder, but the machines are where they are.”

That means all workers don protective gear, including masks, and the company does daily temperature checks. It transformed a warehouse into another break room so people can eat further apart and has added a shift on Saturday to spread people around and increase production.

“We are not around the clock yet, but demand is continuing to increase,” she said. “There is a large number of increased orders with lots of overtime.”

Half of this contract manufacturer’s product line is for medical or military uses. The company’s main mission now is to fill gaps in the supply chain that other medical manufacturers need, since it has the certification necessary.

“Yes, we can build, yes we can serve,” exuded Stephanie Gronvall, director of marketing and development. “We are reaching out to companies, especially locally. We are open, we are here for you, we are all in this together.”

The company is “blessed with a lot of space,” added Jessica Kinsey, Career Development Manager. In addition, “everything is on wheels,” further allowing staffers to spread out. The company also has found that shifting people to the usually lighter evening shift helps them keep an even safer distance while helping to accommodate caregiver needs.

Business has picked up because the virus had hit the companies Chinese competition. So far the firm has not had much problem with its supply chain, except for a specific resin that was manufactured in Italy.

“They were supposed to ship it to us, and we are hoping it is on the ocean” said Peter Spohn, director of business development.

TCI manufacturers primarily for the medical and pharmaceutical industry. Its products can be used in making the tops of vials used to test for things like coronavirus, so “we are needed now more than ever,” said CEO John Tippett.

“The spacing in our site is much safer than a supermarket,” said Tippett, who added, “I’ve been with this company for 25 years. I’ve never seen anything like this. I can tell you that you can’t close manufacturing down, because that would turn this problem into something far worst.”

49 employees, about 35 in production

The company makes custom molding out of such materials as mahogany or cherry walnut for high-end residential and large commercial projects, including football stadiums, classy hotels and Ivy League universities. Boyce’s products are usually one of the last to be installed before a building can be occupied. The company is covered under the wood product and construction exemptions, but before that announcement was made, when CEO Brien Murphy was interviewed, he was clearly worried that his company would not be considered essential.

“Unless we continue, we are going to strand not only our workers but hundreds of thousands that rely on our projects to get those certificates of occupancy,” he said.

If he were to be ordered to shut down, he said, “make no bones about it. There will be no Boyce Highlands.” Echoing President Trump, he added, “we think the cure would be worse than the virus, if we have no economy to come back to.”

Badger, which makes a variety of personal care products, was deciding how to move forward in the crisis when contacted by NH Business Review.

“If we are asking them to come to work, there has to be a reason,” said Emily Hall Warren, director of administration. At first blush, she said, “I would say sunscreen and diaper cream are essential products, while maybe tinted lip balm is not.”

There has been a downturn in business as gift shops and some natural stores shut down, but pharmacies and grocery stories carry their products, and they are sold online. But some workers have also pulled out, taking advantage of the company’s very generous leave policies, to take care of their school-age kids.

On March 16, the company closed the administrative part of the operation to work remotely and split production employees into two shifts of 15 – Monday through Wednesday and Thursday thru Saturday, so it workers would be spread out more, allowing time for deep cleaning in between. Instead of several around a table, each employee has his or her own, with clear markers on how to walk to avoid each other.

“We are trying to relearn old habits, but it is difficult,” said Hall Warren.

100 employees in New Hampshire, 60 in production

“We are obviously an essential business,” said CEO David Greer.

But keeping everyone safe is a challenge. Both thermometers and masks are on order, and the company eliminated the overlap between day and night shifts to sanitize and spread out the work force and is staggering lunch breaks so workers can avoid each other. Already one employee who Greer suspects has the virus is self-quarantined and awaiting test results.

But Greer said that health privacy laws prevent him from asking about it.

“They don’t have to tell us, but we don’t want them in the building,” he said.

MilliporeSigma’s Jaffrey site makes filtration devices and membranes used for the discovery and manufacturing of a number of drugs, including vaccines

About 40% of the workforce is working remotely, while the company uses temperature checks and shift changes. So far “no confirmed cases at this time,” said David Poggi, head of the plant’s operations, but he did not elaborate further.

“This is probably going to get worse before it gets better,” he added, “Our production is critical to the crisis. Our employees are one of the many heroes on the battlefield of work to keep this society afloat.”

23 employees, most involved in production

Homefree makes cookies “that everyone can enjoy” because the company makes sure that they contain no ingredients that could trigger severe allergies. Like the makers of all food products, it is considered an essential business.

The company already has the highest standards in terms of sanitation, so that not a speck of contaminants gets into the food, which is distributed on campuses and at hotels and conferences, all of which has been put on hold.

“We are taking this one day at a time,” said Jill Robbins, the company’s founder and president.

The company also has had supply problems.

The special film to wrap around the cookies, a strong oxygen barrier that keeps them fresher and thereby less in the need of preservatives, comes from Asia. Last she heard, the shipment is stuck somewhere in India. She was able to find a local supplier, which indicates how manufacturing is interconnected. “It’s not just the supermarkets that need to stay open, we need to keep the whole chain flowing.”

Worthen manufactures adhesive chemicals and fabrics for such uses as EKG pads. There is a rush on those orders, while others are being put off. The result?

“We are shockingly steady. We prioritize the pads. Hospitals are going to have those pads.”

The company has been able to get supplies for production, but not medical supplies. It makes its own hand sanitizer, donating extra to local nonprofits and local manufacturers.

Worthen’s biggest concern is that they might run out of alcohol, used not only for the sanitizer but as a key ingredient of the chemicals in production.

Digital thermometers are on order. And despite the need for workers, the company has sent everyone over 60 home because they are at high risk. Already one person called in with a temperature and self-quarantined. He got tested, but the two weeks were up before he got the results back.

“He may never get those results,” Worthen said.