At midyear, some find it can be almost too hot

“Plateaued” was the way Rachel Eames, a board member of the NH Association of Realtors, put it.

“A kind of a slowdown, though it did pick up a bit,” said Annette Nielsen, an economist with the state Economic and Labor Market Information Bureau.

“Not an earthquake, but a bit of rumbling,” summed up economist Russ Thibeault, principal of Applied Economic Research in Laconia.

But ask many businesspeople and the word “slow” doesn’t come to mind.

For instance, Cirtronics, an advanced contract manufacturer in Milford, increased its workforce by 50%, to 225 people, in the last year because it has been so busy. Or GT Advanced Technologies in Hudson, which has more than doubled its workforce in three years, to 140. And Eames’ Eames Realty Services of Concord had 14 offers on a house outside Bear Brook State Park in Allenstown, 48 hours after it was listed for sale. 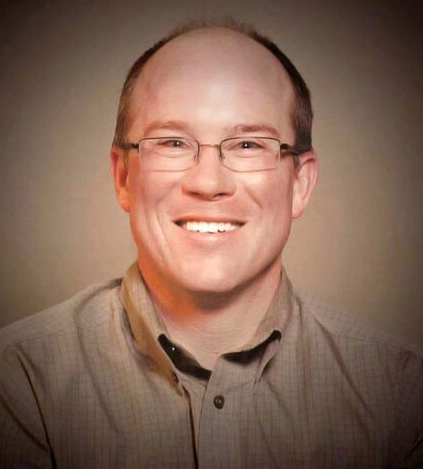 New Hampshire is at 2.4% unemployment, the third-lowest figure in the nation in April. So what else could you want?

Some more workers perhaps, and places that they can afford to live?

And then there is the trade war. Most New Hampshire companies just hear that rumbling on the horizon, though some, like Abenaki Timber Corp. in Epsom, have already taken some shrapnel: a 25% retaliatory tariff on red oak “that has just crushed us,” said Steve French, president of the firm. “We are scrambling for markets. We are scrambling to get our costs down.”

But overall, New Hampshire businesses are finding the economy hot, almost too hot. There’s too much to do, too many orders to fill and not enough people to do it.

“We can’t sell stuff because we can’t find people to build,” said Greg Rehm, founder and owner of Liberty Hill Construction in Bedford. “Schedules are getting blown.”

The numbers, however, seem to say something different.

Business tax collections — after going up 20% in fiscal year 2018 — have in the first five months of this calendar year dropped a whopping 31%. 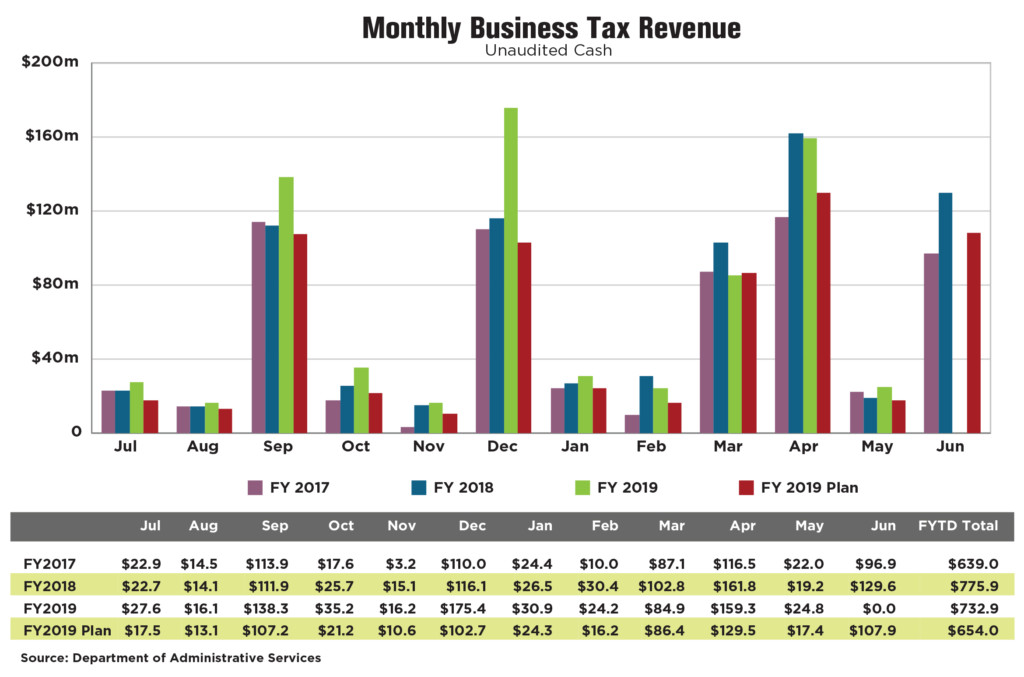 The state’s GDP? It’s growing, but not so much. It grew 1.7% in the last quarter of 2018 compared to 2.2% nationwide. Ditto personal income, which lagged a half percent compared to the national rate of 4.5%.

“We had been the fastest-growing state east of the Mississippi,” said Thibeault. “I sense it’s a bit of a slowdown. The labor shortage has been here for a long time, and we don’t have Mexican immigrants helping us out.”

Is it the labor shortage? New Hampshire ranks have swelled, though not by nearly enough. The civilian labor force grew by some 10,000 workers last year, with private employment going up by 8,500 seasonally. Yet job growth did slow for the first few months of the year before bouncing back. Perhaps that wasn’t because of a lack of jobs, but lack of workers.

You would think that the labor shortage would push up wages, and in some cases it has.

Tom Boucher, CEO and owner of Bedford-based Great NH Restaurants Inc. (owner of the Copper Door, CJ’s and T-Bones restaurants) now starts workers at $12 an hour — “including the dishwasher still in high school,” he said. 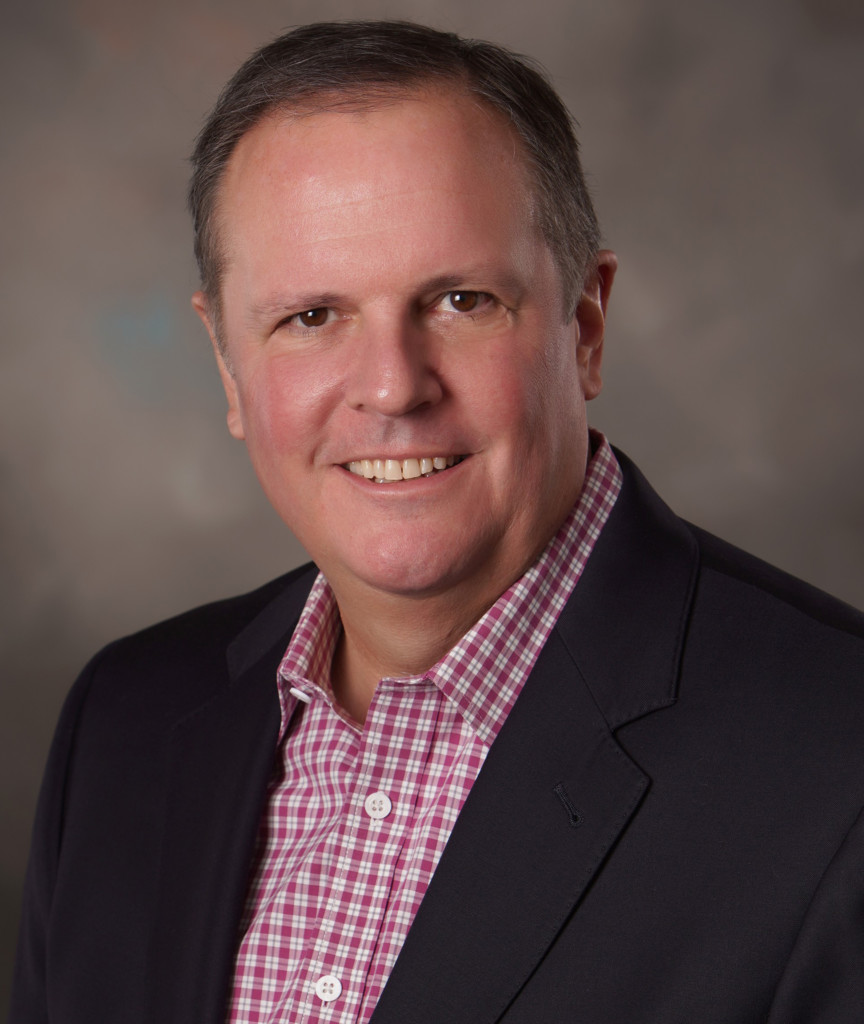 Statewide, hospitality workers’ wages averaged $16.05 an hour in April, up by 57 cents in a year.

But they are the exception. Overall wages in New Hampshire actually fell 12 cents an hour and 12 dollars a week in April compared to a year earlier. No one knows for sure why, but here are two possibilities:

• The number of hours worked has dropped to 33, nearly a half-hour a week. Does that reflect a slight slowdown, or less overtime as companies hire more workers, or a general shift to a less traditional workforce with flexible hours?

• A demographic shift as older workers retire and newer workers fill up their jobs at a lower wage.

The fallback in wages also could be a measure of what types of occupations are growing.

In any case, these statistics indicate that wages have remained relatively stagnant in the middle of a “recovery” that is now nearing a decade long.

That was a big issue in the last presidential election and could become one again.

Speaking of hospitality, the tourism season seems to be off to a great start, despite the shortage of labor.

A snowy winter resulted in 2.3 million overnight stays, which along with day travel resulted in $1 billion in spending, a 10.7% increase. Rooms and meals tax revenue from January to May is up 4.5%, though hotel occupancy fell for the first four months of the year, to 50.5%.

But things are looking promising for the summer, which accounts for 40% of all tourism spending in New Hampshire.

Online springtime inquiries for White Mountain Attractions were up by nearly a fifth.

All told, tourism spending is expected to rise 2.7% this season, resulting in 3.6 million overnight visitors in New Hampshire with spending nearing $1.9 billion, estimates the state’s Division of Travel and Tourism Development.

The problem isn’t just attracting enough people, but finding a place to put them. Boucher’s restaurant chain even bought a condo to house top staff in the Lakes Region so they can manage 50 new hires this summer.

New listings are down 7.5% compared to last May, 6% year-to-date. The number of homes for sale declined nearly 17%. Indeed, there are only three months of inventory on the market. Last May, the figure was closer to four. Once a home does go on the market, it is sold in 56 days, on average, five fewer than a year ago. And the homes are fetching 98.7% percent of the asking price. 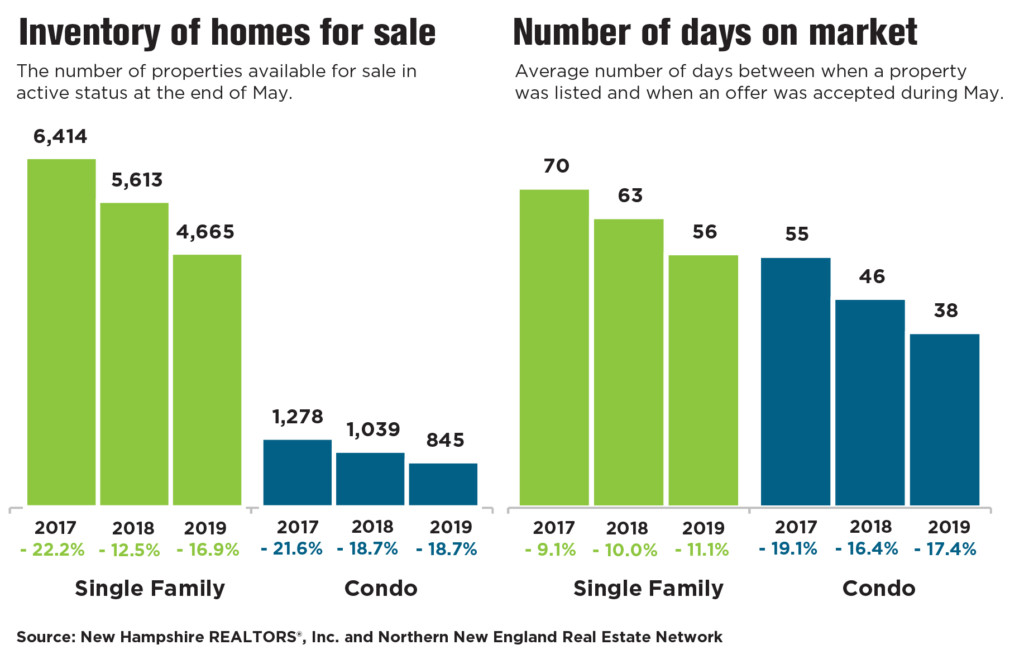 But it isn’t just inventory, said Eames. It is also the type of home and the type of buyers. They don’t match.

Buyers tend to be people at the end of their careers seeking to downsize, or at the beginning, seeking to move into their first home. They both want smaller, more efficient, modern homes. Yet the homes on the market are the ones older people want to leave – older, larger homes. The most desirable homes, the ones that are selling, tend to be smaller and more affordable.

You would think there would be a rush to build new homes. But the number of single-family building permits has actually gone down year to date by about 10%, not up. That’s partly because new homes affordable to buy are often not affordable to build, thanks to zoning restrictions and yes, the shortage of labor.

There is more interest in building new multifamily housing, enough perhaps to slow but not halt the rise in rents, and even lift the two-bedroom occupancy rate from 1.4% to 2%. In 2018, for instance, the statewide median two-bedroom rental was $1,295 a month, a $37 year-over-year increase. In the last four years before that, it was up about $50.

So since selling and renting aren’t that great an option, a lot of people are staying in place, which is bad news for Realtors but good news for remodelers like Rehm.

“I actually like a shortage of inventory,” he said. “I want to use what we’ve got.”

Hardest hit has been exports to China, with exports there down 28% year to date. And exports to Mexico, which was once our top trading partner and is now No. 3, are down by 3%. (Exports to both nations dropped about 13% in 2018.)

Germany is now our No. 1 trade partner, followed by Canada. Exports to Hong Kong dropped 48% and fell 55% to South Korea.

For Abenaki Timber in Epsom, the Chinese retaliatory tariffs “really hurt,” said French, because the company’s hardwood is on a barge floating in the ocean. His Chinese customers demanded that they split the tariff, “and if they don’t pick up the wood at the port, there are all sorts of problems.” 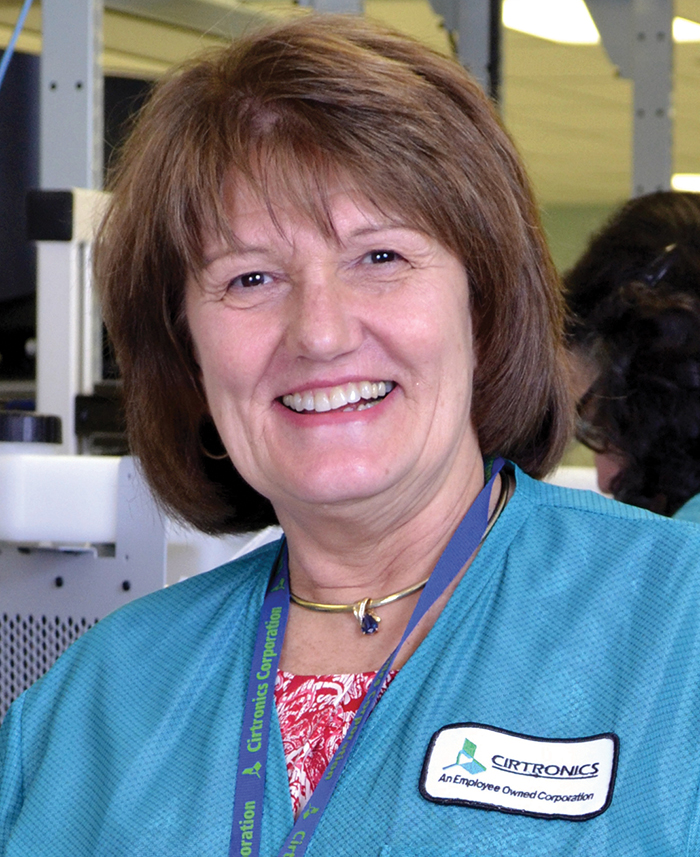 French can and has found other customers for his hardwood, but it is hard to make up 30 to 40% of a market that has “gone away.” He compared it to trying to halt a large ship: “It could take miles to turn around.”

Mostly he is concerned about his employees. Not only would they be hard to get back in this tight labor market, but “they are like family. The biggest thing is I want to get to the other side of this market without layoffs or shutting down, but in two or three months, we may have to do that.”

French appears to be the exception, though. Many manufacturers have found their way around the tariffs.

“We’ve been able to pass them on to our customers,” said Gerardine Ferlins, CEO of Cirtronics, which primarily sells to the healthcare industry and the military.

Tariffs only affect a small percentage of the materials the company currently uses.

GT Advanced Technologies has been hurt by trade wars before, selling equipment to Chinese manufacturers to produce the material to make solar cells. That and a disastrous deal with Apple drove the company into bankruptcy in 2014.

But since it reorganized in 2016, GTAT has concentrated on selling high-margin materials, not the equipment to make them: carbon silicon used for large-scale use in photoelectric converters, the smart grid and eventually for electric cars — the “electrification of everything” as GTAT CEO Greg Knight put it. 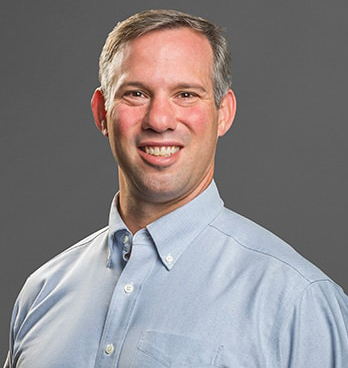 The company still makes sapphire, but that goes to the defense and laser industries. Now the company’s main market is outside of China, though it would like to expand there, if the trade war ever dies down.

But China is a big supplier of the materials used to make the company’s equipment.

“So our outlays are a little larger, not large enough to sway us away from China, but it does create a burden without changing our behavior,” Knight said.

The trade war might have a similar slight effect on Resilient Buildings Group Inc., a Concord-based company that helps construction companies build to higher energy-efficiency standards and increase use of renewables. The trade war has increased the price of solar cells.

“It adds about 5% to the overall project,” said the firm’s general manager, Dana Nute.

For most, though, the trade war has had even less of an impact. The New Hampshire Manufacturing Extension Partnership conducted a recent survey to gauge the most important strategic challenges in the last three years.

“Trade? It didn’t even come up,” said Zenagui Brahim, president of NHMEP.

The shortage of labor was the first thing manufacturers mentioned, followed by product innovation and cost reduction.

One thing nobody was complaining about was lack of business.

“The first question I ask companies is, ‘How is business?’” Brahim said. “No one said it is not good. They all said, without exception, that business is booming, that there is a huge demand for their products.”