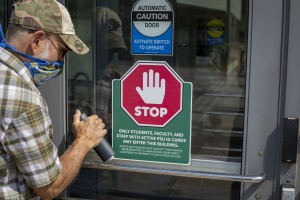 Like many students across the country this year, Adrienne Lafond recently found herself making a big decision under unprecedented circumstances.

As the 18-year-old weighed her next steps after graduating from Londonderry High School, her mind was on the final months of her high school experience, marked by remote learning and delayed senior celebrations thanks to the pandemic.

Though she thought about taking a gap year, she worried she might not push herself if she took a break from school. And she wasn’t sure some of the four-year colleges she’d looked at, such as Rivier University in Nashua and the University of New Hampshire in Durham, would be worth the investment if she’d be taking most of her classes virtually.

In the end, she opted to study nursing at Nashua Community College, in part because she felt the smaller campus would be safer, especially for some of the hands-on courses her degree requires.

“The more I kept looking at it, the more I kept telling myself, if I’m gonna end up at home, I’d rather be paying less,” Lafond said. “ … And I’m kind of really happy with that decision, because a couple of my friends who are at those (four-year) colleges aren’t really getting their college experience anyway.”

Preliminary figures suggest that Lafond is not the only New Hampshire student whose college decisions have been affected by the pandemic this year. According to data provided by the University System of New Hampshire and community college officials, Granite State community colleges and four-year institutions are seeing a drop in enrollment this fall, including the state’s public institutions.

The trajectory follows a national trend in higher education amid a public health crisis that has forced colleges and universities to quickly rethink the student experience. A review of 629 schools by the National Student Clearinghouse Research Center found that as of Sept. 10, undergraduate enrollment had fallen 2.5% across all types of higher education institutions, while total enrollment had dropped 1.8%.

And though community colleges have historically fared well during economic downturns, this period of financial uncertainty appears to be hitting the industry differently.

Of the four schools in the University System in New Hampshire, the state’s flagship school, the University of New Hampshire in Durham, saw the least significant decline in enrollment this fall at about 1.15%, data show. The university enrolled fewer first-year students, as well, dropping slightly from 2,731 in 2019 to 2,630 in 2020.

Keene State College, which has already seen declining numbers in recent years amid financial pressure and administrative restructuring, saw total enrollment drop nearly 9% this fall compared to fall 2019, with 3,213 students registered, according to the data. The college also saw a decrease in first-year, first-time students enrolling, with 737 freshman enrolled this year compared to 843 in fall 2019, per the Keene State Factbook.

Peg Richmond, director of admissions at Keene State, said some returning students who chose not to enroll 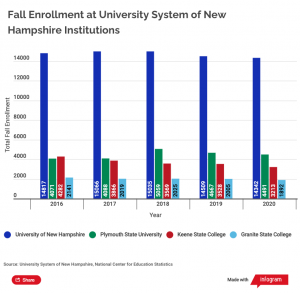 this fall pointed to anxiety around being apart from family during the crisis, as well as the financial strain of the pandemic. However, she said many hope to come back for the spring semester.

“Some of it was financial, because they either were unable to work over the summer and save the money that they needed, or their families had lost jobs or work,” Richmond said.

But the college is seeing promising interest for the fall 2021 term. As of late September, Keene State had received 227 first-year applications for next fall. By that date in 2019, the college had only received 86, Richmond said.

Anticipating that rising high school seniors and their families may be nervous about the college application process during COVID-19, Richmond said the college launched its recruitment efforts early this summer and had application materials online sooner than in previous years. Keene State also offered a range of virtual events and resources for prospective students, including online town hall meetings with President Melinda Treadwell.

“What we learned was super exciting in how we could reach students in different ways that we had never imagined before, and things I think we’ll continue to do,” Richmond said. “Even a year or two from now when things are as they were and we can have huge open houses, we’ll still hold all of these virtual events and make appointments with students one-on-one through Zoom just for convenience sake, because now we know how to do it.”

NHTI in Concord took a similar approach, according to President Gretchen Mullin-Sawicki, with frequent text and email campaigns, community Zoom meetings and virtual advising throughout the summer. Still, Mullin-Sawicki said the community college’s enrollment dropped about 13% this fall. At Nashua Community College, where Lafond is enrolled, the total headcount dropped almost 14%, according to data from late October.

Plymouth State University seems to have bucked one part of the state’s downward trend — despite a nearly 7% decrease in total enrollment, enrollment of first-time, first-year students rose almost 4% there this fall.

Marlin Collingwood, vice president of communications, enrollment and student life at Plymouth State, partially attributes that increase to the university’s emphasis on providing students an in-person experience during the health crisis.

“We heard overwhelmingly from our incoming first-year students that they wanted an in-person, residential experience,” Collingwood said. “That’s what we are, we’re a residential university, so they were anxious to make sure that we were going to provide that.”

Leading up to the fall semester, Collingwood said the university pivoted its marketing and communication strategies with prospective students to emphasize Plymouth’s size and location in an area with relatively low coronavirus transmission. He said parents and students wanted to know that they’d be safe on campus, which made the university’s rural setting more attractive.

“That combined with the idea that we’re a residential campus that sits in the … beginning of the White Mountains, I think really got us to a point where there were students who hadn’t necessarily thought of Plymouth as their first choice,” Collingwood said, “and as they began to reconsider whether they wanted to go far away or to a big urban setting, we know that some of those students decided to come here.”

However, Granite State colleges and universities have not been immune to the effects of the virus.

“While everyone is obviously concerned about the rising cases across the country, in New England and in New Hampshire, PSU continues to have a very low case count on our campus,” Collingwood said, noting that the university has had a daily case average of around 10 over the past few weeks. “ … This is a testament to our testing regimen, health and safety protocols, and the determination of our students in completing the semester in person.”

Richmond said that despite the positive cases, students on campus at Keene State this fall also seem to be taking health guidelines seriously, and the college is hopeful that it will see its enrollment recover on the other end of this crisis.

“I just continue every day to be so encouraged by our students and how they’re responding to this and how mature they are,” she said.

This article is being shared by partners in The Granite State News Collaborative. For more information, visitcollaborativenh.org.

Opening hearing is Friday in challenge to NH's school-funding scheme