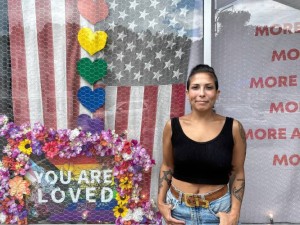 When Miriam Kovacs saw a one-star review for her Franklin restaurant the Broken Spoon from a user calling themselves Rudolf Hess, a leading member of the Nazi party in Germany, she knew something was wrong.

Then came a slew of more.

Kovacs, who has Jewish and Asian roots, was being trolled by the neo-Nazi hate group the Nationalist Social Club, known as NSC-131. It turned out Kovacs was not alone. In the Seacoast, Dresden Lewis, owner of Nommmunism Bakery, was also receiving a swarm of one-star reviews and personal threats.

Loyal customers rallied and business was barely affected. Yet with the rise of white nationalist hate groups in New England, both business owners want their communities and elected leaders to take a stand.

Cooking for a cause

Years before Lewis and Kovacs were the target of online attacks, they bonded over their common quest to start new culinary businesses during a global pandemic. Kovacs opened the Broken Spoon in November 2020. Lewis, started her social media-based bakery with a zero-contact delivery service.

“I made internet friends with other businesses who started during the pandemic,” said Lewis. “Now we’re bonded in trauma.”

Both businesses started with clear messaging in mind. Lewis donates 10 percent of all Nommmunism proceeds to The Lovering Clinic in Greenland, which supports access to reproductive healthcare. In the windows of the Broken Spoon storefront on Central Street in Franklin, Kovacs hung a sign that says “you are loved” and another that reads “more equality, more hope, more humanity, more pride, more acceptance.”

Last month, on July 16, a group of white nationalists staged a demonstration at the Kittery Trading Post in Maine with signs supporting segregation and white supremacy. In response, Lewis planned a counter protest the following week. She sold her pastries and promoted messages of inclusivity. Then the online attacks began.

“It spiraled over pastries,” she said. “I found myself wondering how fragile are your belief systems that you are threatened by women making food and sharing it with their communities.”

Kovacs shared a post on the Broken Spoon’s social media pages in support of the counter protest. She wanted to be clear with her customers that she too would call out extremist beliefs in the area. If customers don’t like it, they can eat elsewhere she said.

“If I’m afraid that people won’t support my business because I don’t support white supremacy, then that’s a bigger issue altogether,” she said. “And if I’m afraid of losing that business, that’s not even business that I want. You know, I’m not here to feed hatred.”

Google has deleted one-star reviews for both businesses, but in doing so Nommmunism’s Google business profile was also erased.

The experience has catalyzed an activist movement for the business owners, providing them a platform to stand up against white supremacy and encourage their customers to do so.

Now when customers get a delivery from Nommmunism, their pastries come with an “easy activism packet,” which includes pre-written, stamped and addressed letters to local politicians in the area asking them to take a stand against the rise in white supremacy.

Kovcas spent an afternoon putting these packets together and sharing them. Lewis said 80 people reached out to her in one day about how to get one.

The need for these packs stemmed from a frustration with an inadequate response and lack support from elected officials, they say.

“We live in the Granite State and it’s such a great state to be a small business,” Lewis said. “But if anything goes wrong, you are on your own.”

Kovacs personally reached out to U.S. Sen. Maggie Hassan. Although Hassan’s team replied, Kovacs was disappointed that the senator has yet to make a public statement condemning the increase of white nationalist presence.

In order to confront this issue, the groups need to be called out, not denied, she said.

“It starts slowly and it starts with people hoping and believing that it can’t happen here,” Kovacs said. “Believing it’s happening doesn’t mean we’re accepting that it’s happening. The key is to believe that it exists so that we can address it.”

Kovacs has also taken to her social media pages to defend her beliefs and her business. Meanwhile, Lewis has had to make the Nommmunism Instagram account private, due to some hateful comments she received.

However, the support from customers is a unifying force. Since the online harassment, more people have placed orders to show they support the messages that Nommmunism and the Broken Spoon stand for.

It has been encouraging to provide customers with a chance to engage beyond food.

“In the time when people don’t feel heard, when they haven’t felt heard, it is nice to be able to give people resources and their own voice,” said Lewis.