In virtual event with Pappas, ‘achievement’ of approval is praised 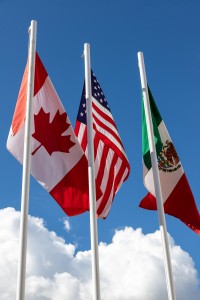 “Anything we can do to streamline and simplify the process of exporting and importing helps create opportunity,” said Mark Elliott, senior manager of corporate affairs at Velcro Companies, whose North American headquarters has been based in Manchester for more than 60 years. “Twenty-five percent of our workforce is based here, so it’s a very important part of what we do in our local supply chain.”

There are a lot of similarities between the updated trade agreement and its predecessor, said Elliott, but a much-needed update to the North American Free Trade Agreement, or NAFTA, which went into effect in 1994, was needed.

“Moving to digital transfer of information – that really streamlines the processes,” said Elliott. “Electronic signatures is a great way to share information and get things done more quickly.”

Elliot also was pleased that U.S. Customs and Border Protection said it would be training staff on the new procedures to ensure a swift shift.

Canada is New Hampshire’s number one trading partner, with Mexico closely behind. New Hampshire businesses exported $860 million in goods to Canada in 2019 and $408 million to Mexico.

“What an achievement it was to get this trade agreement passed,” said Dave Juvet, senior vice president of public policy for the Business & Industry Association of New Hampshire, which was very much in favor of the agreement.

“We all recognize we live in a time of heightened partisan activity in Washington, D.C. It’s not easy for Democrats and Republicans to work cooperatively on something, and I think both sides recognized the importance of trade and trade agreement, but both sides had important components they felt had to be part of the trade agreement, so it really took cooperation,” Juvet said.

Another change in the new trade deal is the local content requirement for goods, which has been raised from 62.5% to 75%. That is good news for Hutchinson Sealing Systems, a global manufacturing company with a plant in Newfields that develops rubber and thermal plastic weather strips for General Motors, Ford, Chrysler, Honda and Nissan.

“We’ve been developing sources in Canada to purchase plastic components that go along with our sealing systems for the last 20 years,” said Newfields plant manager Paul Macdonald. “Just over the border, they have a really good infrastructure for tool and die makers and the like, so we’re able to purchase some very significant tooling and equipment from Canadian suppliers.”

Juvet added that the benefits of the deal aren’t just in New Hampshire businesses being able to export more to the two countries, but “it’s equally important for the import of products.”

Pappas praised the passage of the USMCA agreement, which brings some certainty to businesses during “some of the most uncertain economic times for our businesses. He said the USMCA will help with decreasing delays with medical equipment and pharmaceuticals.

Amid the uncertainty sparked by the coronavirus pandemic, Hutchinson Sealing Systems closed its plant from March to May as the automobile business slowed, but it is bouncing back.

“We came back to work the 4th of May with 10% of our workforce. We’re up to 95% of our workforce and our sales have come back to 85%,” said Macdonald, who predicted sales will double in a three-year time frame. “Things are looking up for us.”

Hutchinson has also been affected by the closure of the U.S.-Canadian border has been closed to nonessential travel since March 21, with reopening expected July 21.

“The Canadian supply chain did shut down for a time period, and now with the 14-day quarantine, we’d normally be at a our Canadian source developing the tooling and making sure it’s running properly, so that has been a disruption and we can’t wait for this disruption to go away. It’s caused a lot of chaos,” said Macdonald.

Pappas, who serves on the House Committee on Transportation and Infrastructure, said during a committee meeting there were concerns about seaports and products backing up as a result of disruptions, especially due to availability of crews and ships that transport goods overseas.

But export numbers to date between New Hampshire and Canada are on the rise and overall April 2020 exports from New Hampshire to all countries was up almost 5%, “which is a very different picture than what’s happening on the national side of things,” said Tina Kasim, program manager of the state’s Office of International Commerce. “There’s cautious optimism, but I think the relationships are so strong between the sellers and the buyers, I think they’ve been able to find ways to work with the restrictions that are in place.”