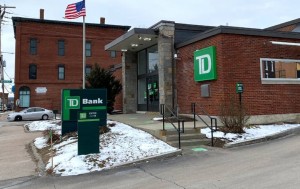 The TD Bank branch in Allenstown will be closing in April. (Geoff Forrester/Concord Monitor)

Carol Testa, a 67-year-old Hillsborough resident, has done her banking for the last 20 years at her local Santander branch, which is only seven minutes from her house.

That branch is closing on March 12, and Testa is displeased.

“I was really pissed when I got my letter,” she said, referring to the notice that the bank sent out in advance of the closing.

Squeezed by a lack of foot traffic due to Covid and society’s movement to online transactions, banks are being forced to take a hard look at the number of physical branches they keep open, with the most vulnerable locations often in rural areas with a single financial institution.

Santander is closing its Hillsborough location to consolidate with the branch in Concord, said Tony Rozon, district executive for the bank.

“We look forward to working with our customers at that location,” Rozon said. He also noted that all employees at the Hillsborough branch will remain employed with the company.

In January, TD Bank announced 81 branch closures across the Northeast, including its location in Suncook, which is the only operating bank in Allenstown or Pembroke. Once the branch shuts in April, people in those communities will have to travel south to Hooksett or north to Concord to access another TD location.

For Testa, the Santander branch in Concord, which is 25 minutes away, will not be sufficient. Hillsborough has a Bank of New Hampshire and a Bar Harbor Bank and Trust, but switching to those locations would mean changing financial institutions, which Testa doesn’t want to do.

“It would be a nightmare to change all that,” she said. Her current banking information is attached to many different accounts and payment plans, such as her Amazon account, and the trouble of changing all of that information is overwhelming, she said. “I’m just barely getting along with computers as it is.”

To stay with Santander, “I’m going to have to drive almost an hour round trip,” she said.

‘We do worry about this’

Testa’s concerns are valid, according to New Hampshire Bank Commissioner Jerry Little, who said that branch closings have “been an issue for the past several months.”

“We are seeing more of it,” Little said. “It’s a trend across the country.”

Little noted that the closing are not specific to banking, as Covid-19 has put a strain on all types of businesses.

“Covid-19 is putting all sorts of pressure on folks and requiring that they take a look at their operations,” Little said.

For financial institutions, he said, this means taking a hard look at branch networks and cutting back where they can to save money.

“We do worry about it,” he said. “Some towns only have one branch of a single bank, and if they close, oftentimes people have to drive like 10, 15, 20 miles to find another branch, and that’s very inconvenient.”

The good news, Little said, is that online banking is a popular and prevalent option that is available to most people, and can help fill in the gaps when these institutions leave small communities.

For Testa, this is a small consolation. “It’ll be a big inconvenience for the little guy, so the big guy can make a lot more money,” she said.