Area has ‘outgrown its workforce,’ says one owner 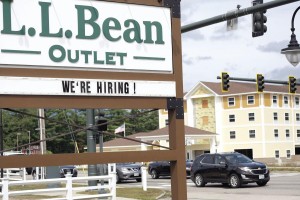 With a busy summer underway despite the coronavirus pandemic — or perhaps because of it, with visitors eager to spend their recreational time and dollars in the great, socially distanced, outdoors — Mount Washington Valley businesses have seen their operations impacted by a lack of workers.

This worker drought has also affected pay scales, with establishments like the Stonehurst Manor recently advertising a salary of $52,000 to $60,000 for a sous chef — and getting no offers, according to owner Peter Rattay.

“A year ago, that would have been a great price and gotten responses, but not this summer — employers are holding onto their people and paying good money,” Rattay said.

Elvio’s Pizzeria and Restaurant of North Conway is usually open six or seven days in summer. But this year, says Elvio DeCilla, the lack of workers has forced him to cut back to Thursday-Sunday hours.

But as it’s been such a frenetically busy summer, his numbers are equal to last year’s full schedule.

“It’s been an incredibly busy summer,” he said. “Usually, we get orders for lunch and then it slows down and then picks up for the night. But it never slacks off — it’s as busy midweek as it is weekends.

In a normal summer, he said he employs 25 to 30 people, including several J-1 foreign workers. But this year he has only about 20, “and six to seven of those are my children and grandchildren,” DeCilla said.

“The unemployment benefit – the $600 — is not helping; it is hurting. I don’t know what will happen come Labor Day, as that usually means the end of summer — but who knows if students will be going back to college and who knows if people are still going to keep coming to visit?” he asked.

The labor shortage is also being felt at such venerable local establishments as the Red Parka Steakhouse and Pub in Glen.

“How bad is the shortage of employees? I’ve got my 71-year-old retired policeman husband busing tables,” said Terry O’Brien, co-owner of the Red Parka.

“We are open five days a week because we cannot get enough help,” said O’Brien, a former president of the New Hampshire Lodging and Restaurant Association. “I really don’t know what will happen after Labor Day as I have high school kids who might plan on continuing to work, but we’ll see what happens,” she said.

O’Brien said she has had to be creative in how to staff her positions, and that the pay scale for dishwashers and cooks, for instance, has gone up considerably.

“Dishwashers are getting $15 an hour compared to starting in the $10 range, as we’ve always paid our dishwashers well. And cooks are being paid $15 an hour and up, which is way more than what we paid them before,” said O’Brien.

“I have two guys I could have put on the line, cooking, but because I didn’t have anyone else, I had to have them do the dishwashing.”

But the business owners are heartened by the crews they do have.

Mike Mallett of the Red Fox Pub & Grille said: “When the ‘close’ order was lifted back in June, I contacted all Red Fox employees and asked for a polling on who could and could not come back to full employment.

“Out of 39 individuals, one person had a medical condition and another could only come back with limited hours,” Mallett said. ”Everyone else was 100% on board and committed to a full work schedule. This amazing response was the only reason that I’ve been able to operate the restaurant seven days per week.”

But, he added, “I cannot profess the same level of success with recruiting additional staffing necessary for accommodating the busy summer tourist visitors. I have tried advertising, social media, word of mouth and every other means of getting the word out, but hiring new staff has been an extremely difficult proposition.”

Stu Dunlop, owner of the Wildcat Inn & Tavern, took a philosophical approach, noting that although he was at first upset that some employees opted not to work to take enhanced unemployment benefits, he overall understands.

“I realized that it was up to me to provide a hospitable working environment that employees would want to come back and work,” said Dunlop, whose business is now well-staffed.

“And for those who continued to take the stipend, which is more than many people had ever made, I had to go, ‘Good for them, good for them.’”

In addition to the Wildcat Inn & Tavern, Dunlop also has ownership in the Kearsarge Inn in North Conway and Glass Graphics of Conway.

“My problem,” he said, “is that we can’t find more people (employees). I definitely need more people at all three businesses. I don’t think it’s because people have chosen to stay in unemployment — I think it’s because the valley has outgrown its workforce, and without the J-1s and some other seasonal workers who might have come here had it not been for the virus, it’s a problem.”

Dave Stone of Horsefeathers and Deacon Street said both establishments are offering shorter hours due to the staffing problem.

“We have been busy, but it’s deceiving because with the indoor capacity seating restrictions of tables six feet apart, we’re probably at 50 or 60% — and even if we could fill the restaurant I don’t think we could find the help to staff it. Nobody (people looking for work) is coming through the door,” said Stone.

“In addition to the stipend, there is also the issue of (workers) having to stay at home and help school their kids if their children are remote learning from home. Then some have parents who are at risk — so it is not all about people just taking the stipend and staying home,” Stone said.