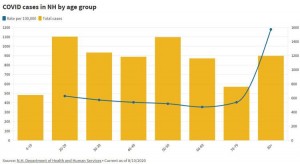 Since the start of the Covid-19 pandemic, significant focus has been put on seniors, as they are at higher risk of becoming severely ill or dying from the viral disease. But in New Hampshire, the largest number of infections has been among a group decades younger: people in their 20s.

The state Department of Health and Human Services’ demographic data report — which is current through Monday — shows 1,102 COVID-19 cases had been diagnosed among 20-to-29-year-olds, or 16.1% of all those who’d tested positive in the Granite State.

“This is certainly not just a New Hampshire thing,” said Dr. William Schaffner, professor of preventive medicine and infectious diseases at Vanderbilt University in Tennessee. “It’s happening here in Tennessee and all over the country.”

‘They are feeling so healthy’

While more people in their 20s are testing positive for Covid-19, their hospitalization and death rates are still much lower than those who are older. Seventeen of the 20- to 29-year-olds in New Hampshire who have tested positive were hospitalized for Covid-19, and only one has died.

Because of the relatively low risk for those in their 20s, Schaffner said, it’s more likely they will have their guard down in public, perhaps failing to maintain social distance or wear a mask.

And as in any age group, research shows people can have no symptoms of Covid-19 but still contract and spread the virus.

“They are feeling so healthy, [but] they could right at that moment be infected and be contagious to others. That’s a really hard concept for people to grasp,” Schaffner said.

Dr. Aalok Khole, infectious disease physician at Cheshire Medical Center in Keene, agreed that those in their 20s are typically more outgoing.

And with the risk perceived to be low for those who are younger, he added, it’s likely many people between 20 and 29 have returned to working in person.

Meanwhile, with states such as New Hampshire having lifted their stay-at-home restrictions, Khole and Schaffner said this age group tends to go out more often and to do so in larger cliques.

“With things reopening in the state, especially bars and indoor restaurants, this age group has more opportunities for potential exposure to the virus,” Khole said in an email.

Another reason for such high infection totals among those in their 20s could be because of the sheer number of people in this age group. While New Hampshire’s median age was high at just over 43 in 2018, people in their 20s were the third largest age group, accounting for 13% of the population, according to the U.S. Census Bureau.

It also could simply be because there is more testing available for lower-risk populations now than at the start of the pandemic, Khole said.

Regardless of which age group has the highest rates, Schaffner and Khole said everyone needs to take precautions.

People who go out should do so only with household members, wear a mask at all times except for while eating or drinking and maintain a proper social distance, according to Schaffner.

It’s important to remember Covid-19 is a threat to all, Khole added.

“This virus doesn’t differentiate based on age, and hence we all need to play our part,” he said. “Even if this age group isn’t directly contributing to the mass hospitalizations and death rates, they may be effective propagators of the pandemic and render older communities to be at a greater risk.”