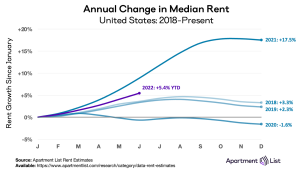 The pace of rent increases in Manchester is showing signs of slowing, but that may give little solace to tenants in the Queen City.

According to a report from Apartment List, rents increased 1.8 percent between May and June, a significant slowdown from the 3.2 percent average hike reported the previous month. So far, according to the report, year-over-year rent growth in Manchester stands at 11.7 percent, compared to 23 percent a year ago.

Median rents in Manchester currently stand at $1,341 for a 1-bedroom apartment and $1,789 for a two-bedroom.

Since the start of the pandemic in March 2020, Nevertheless, Manchester rents have risen by 40.5 percent, according to the report. That’s a percentage rate by any standard – in fact, of all the major metropolitan areas tracked by Apartment List, only the Tampa, Fla., (42 percent) and Rochester, Minn., (41 percent) have seen rent increases higher than Manchester in that time.

Nationally, Apartment List reported a 1.3 percent increase in May