Legislative preview: The week ahead for New Hampshire lawmakers

Family and medical leave, tenant-landlord, Covid vax bills are on the agenda 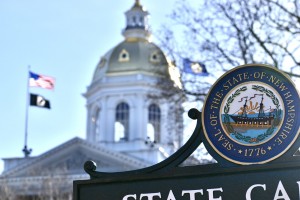 New Hampshire lawmakers will be holding hearings on a wide range of crucial legislation this week, including measures repealing the state’s paid family and medical leave plan, instituting a new garbage tax, a variety of tenants’ rights bills and some key energy and environmental laws. And, of course, there will be bills focused on Covid-19 vaccines.

The Senate Energy and Natural Resources Committee will hold a hearing on Senate Bill 271 in the morning. The bill attempts to get the Public Utilities Commission to reverse past decisions and revive the Burgess Biopower generating plant in Berlin.

In the afternoon, the Senate Transportation Committee will take testimony on SB 447, which would establish an electrical vehicle fund, and SB 446, which would fund broadband projects. The House Science, Technology and Energy Committee, meanwhile will hear a bill that would enable limited electrical producers to incorporate storage.

Also, more bills on Covid-related mandates will be heard, this time by the House Health and Human Services Committee. One, House Bill 1224, would prevent towns from mandating masks, prevent businesses from requiring vaccinations of their workers, prevent government from issuing vaccine passports and prevent businesses with public accommodations from insisting that customers be vaccinated. Another, HB 1604, would include medical facilities in the current so-called “medical freedom” law. If passed, hospitals, nursing homes and medical offices would have to choose between following federal law, which requires that workers be vaccinated, and the state laws that would forbid it.

Among the public hearings in the House are for two bills that would repeal the state’s yet-to-be-instituted voluntary paid family and medical leave program. HB 1165 will be held by the House Labor Committee in the morning and the House Commerce Committee will hear HB 1258 in the afternoon. The family and medical leave plan, strongly supported by the governor, would use business tax breaks and possible subsidized rates to encourage businesses and individuals to join a plan anchored by a taxpayer-supported benefit for state employees. But the plan is being opposed by some members of his own party who have said that it involves too much government interference in the free market.

Other hearings of interest that morning involve HB 1124, requiring that businesses use the federal E-verify system to avoid hiring undocumented immigrants; and HB 1337, which would tie the duration of unemployment benefits to the state’s unemployment rate; HB 1415, which would require employers to bear the financial responsibility for employer-required health screenings; and HB 1472 which would prohibit anti-union activities by employers.

On Wednesday morning, The Senate Ways and Means Committee will hold a hearing on SB 379, which would impose a tax on solid waste that would be rebated to municipalities for recycling programs. The intent is to only tax out-of-state trash, since those municipalities would not be eligible for the rebate.

In the afternoon, the House Commerce and Consumer Affairs Committee will be voting on several bills, including HB 1523, which would establish a child care fund, presumably using federal funds, and HB 1589, prohibiting the sale of any product containing intentionally added PFAS, which retailers might weigh in on.

On Thursday, the full Senate is expected to pass HB 549, which would keep the system benefits charge in place – and thereby the utilities’ energy-efficiency programs – despite a PUC decision to roll the programs back. The bill is on the consent calendar, meaning it will likely go to Gov. Chris Sununu unless a senator objects. Sununu is expected to sign it, saving hundreds of clean energy jobs.

Among the most controversial bills to be debated in the Senate on Thursday will be SB 319. Originally, the bill would have required insurers to offer a wellness incentive for people who are vaccinated, similar to those given to those who quit smoking and lose weight. The amendment simply makes that an option. The amended bill passed the Senate Health and Human Services Committee on a 3-2 vote, so expect it to be challenged on the floor by those who maintain that an incentive is a punishment for those that don’t get it, and is therefore “discriminatory.”

There will also be votes on funding broadband (one which would allow such funding to be used in areas with inadequate cell service), increasing nursing home reimbursement rates as well as the lead paint remediation fund, something that will benefit landlords as well as tenants.

The Senate will also vote on SB 217, which would require landlords give two months’ notice for tenants who are being evicted because they want to sell or rent the property. They currently have one month.

On the House side, the House Judiciary Committee will be voting on a number of landlord-tenant bills as well. HB 1133 would prohibit terminating a lease on the sale of real property, HB1200 would require a longer notice to tenants of a rent increase, HB 1291 would forbid landlords from turning away tenant applicants with Section 8 housing vouchers, and HB 1408 would require a refund of residential tenancy application fees.

The House also will be voting on repealing the Housing Appeals Board (HB 1254), setting up a land use review docket (HB 1389), and HB 1544, which would ban construction and demolition from landfills. There will also be another bill on vaccination: HB 1490, prohibiting businesses with public accommodations from discriminating against those who won’t get the vaccine or won’t wear a mask.