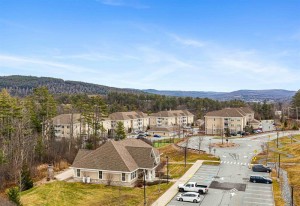 Timberwood Commons, a 252-unit market-rate multifamily complex in Lebanon, has been sold for $69.25 million.

Located less than a mile from Dartmouth-Hitchcock Medical Center, the complex sits on 42.63-acres with five three-story garden-style buildings and a five-story elevatored midrise building.

The community also features a freestanding clubhouse with a business center, community room and fitness center. According to CBRE, Merion, which acquired Timberwood in June 2014, had recently started a renovation program including the installation of plank flooring and installation hard-surface countertops.

Merion recently went to court in an effort to overturn a decision by the Lebanon Planning Board to allowing Saxon Partners to build 250 new units across the street from Timberwood.

Merion claims in its Grafton County Superior Court suit, which was filed in November, that the board failed to discuss the project’s wetlands designation, that it was given “erroneous legal advice” by city staff and that planners failed to act impartially.

The Saxon project, put forward by Hingham, Mass -based Saxon Partners would include two connected four-story buildings, parking and other amenities on a 75-acre parcel.

According to the Valley News, the project was approved in October 2020 following a six-month review by the planning board.