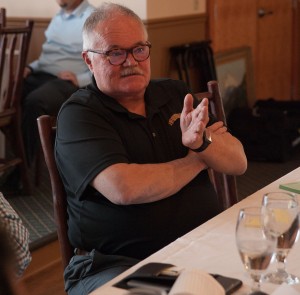 Scott Rice, owner of the Woodstock Inn and Brewery in North Woodstock, received a forgivable loan in the first PPP round last spring well as this go-round. ‘It let us keep a lot of the employees we normally would not have been able to,’ he says, and the second loan will do the same thing. (Photo by Karen Bachelder)

The end of the month marks the deadline for businesses to apply for loans from the pool of money allocated late last year for the federal Paycheck Protection Program.

The latest round of PPP funding approved by Congress in December totaled $285 billion and was part of a $900 billion stimulus package called the Economic Aid to Hard-Hit Small Businesses, Nonprofits and Venues Act. Businesses have until March 31 to apply for a loan from a qualified lending institution.

As of the end of February, a little more than 9,000 loans had been approved for New Hampshire businesses from the December stimulus money, with a total value of close to $841 million, said Amy Bassett, District Director of the Small Business Administration in Concord.

That compares to 24,000 loans, for a total of $2.5 billion, that were given to New Hampshire businesses under the original PPP last spring.

The average size loan in New Hampshire was about $104,000 through in that original round. This time, the average is about $93,000. Those who received loans last year can apply in 2021 for a second loan or if they did not receive a loan can apply for a first loan.

“Already got it,” said Scott Rice, owner of the Woodstock Inn and Brewery in North Woodstock, when asked whether he applied for a second loan. “It was very easy. We got it within three days.”

Rice’s experience with the PPP is what Congress had in mind when it passed the CARES Act to help businesses that were hard-hit by Covid-19 and forced to either close, by state order or because business declined, or curtail their operating hours and lay off employees.

Restaurants and the entertainment industry were affected worse than most.

“It let us keep a lot of the employees we normally would not have been able to,” Rice said, adding that the second loan will do the same thing.

Rice said he used all of the money for payroll, and because of that, the entire amount of his first loan was forgiven.

Bassett said the rules were changed for the newest PPP to reduce the possibility of being denied a loan, which was a frequent complaint of many New Hampshire companies in the initial PPP funding.

“They definitely made it more focused and targeted,” Bassett said. “The program has changed a lot and we advise businesses to consult with their bank to figure out the best option for them. Certainly if they have been impacted they should take advantage of the program.”

The limit on the number of employees for eligible businesses is 300 or fewer under this PPP and the loan maximum is $2 million.

In an effort to reach out to the smallest businesses, many of which were left out of the first PPP, a time period was set up during a two-week period ending March 9 that allowed only firms with 20 or fewer employees and sole proprietors to apply for assistance.

Though a state-by-state breakdown of these loans has not been compiled by the SBA, nationally more than 400,000 small businesses and nonprofits with fewer than 20 employees applied as of March 7, the agency said. Additionally, the rate of loans for small businesses in rural areas was up 12%, an increase of 1,000 businesses per day, compared to the average rate for the 10 days prior to the exclusivity period. Additionally, the number of minority-owned businesses seeking aid were up 20% and it was 14% higher for women-owned businesses.

Mike and Christine Charest, owners of Taverne on the Square in Claremont, received $69,000 in the spring under PPP and another $89,000 from the stimulus package approved in December.

Mike Charest said the money was extremely helpful in keeping employees on the payroll, though he added that they took money out of their own pocket as well to pay expenses.

“We did not lay anyone off and did not cut anyone’s pay,” Charest said of the restaurant’s 18 employees. “It would have been much more difficult without the (PPP) money.”

Charest also said their entire first loan was forgiven because they spent the money on payroll or eligible expenses.

Im the first round, 75% percent of a PPP loan had to be spent on payroll and the remainder on expenses such as rent, utilities and mortgage payments. Those rules were eased with the stimulus package, requiring just 60% on payroll and expanding eligible expenses for the remaining 40% to include anything incurred as a result of Covid, such as building or buying barriers in a restaurant to keep patrons safe. Also allowed are expenses to ensure worker protections during the pandemic such as air-filtration systems.

Another requirement under the current PPP funding is that a business must demonstrate a revenue loss of at least 25% in comparable quarters for 2019 and 2020.

When the CARES Act was approved and PPP loan awarded, many businesses worried about whether they would have their loan forgiven or be forced to repay it. “They tried to streamline things this time, including forgiveness,” Bassett said. “Most of the loans are being completely forgiven.”